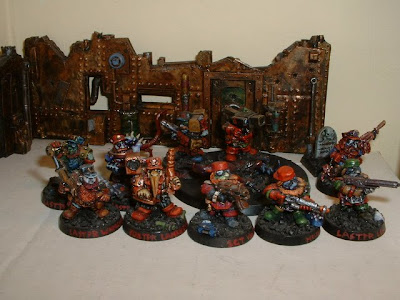 The second squadron of infantry troopers belonging to the Rotted Hearth Platoon are known as The Underdeepers. The name refers back to the part of Khazad-dûm from whence the Balrog was awakened. It was also selected because saying it aloud makes you sound like The Swedish Chef from The Muppet Show. The miniatures are from a variety of Squats releases, but were selected for this unit because they are all wearing caps, distinguishing them from the Blood Eagles with their bare heads. 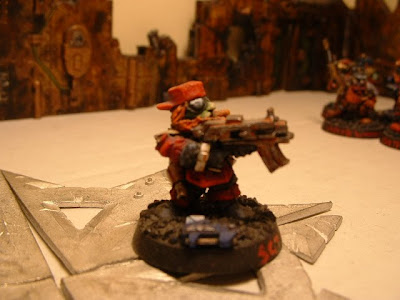 Squad Commander Sergeant Mauser von Dreyse, from the RT03 Space Dwarfs series. He has been given the Bolt Pistol upgrade, but I couldn't bring myself to shrink down Mauser's Boltgun. I did paint it rusty, so it only has the firepower of the Bolt Pistol. He has a bit of Imperial tank tread on his base.

Notice Sgt von Dreyse's cigar, one of many to be found in the mouths of our intrepid Space Dwarfs. The Squats had the greatest rate of smoking among all the Warhammer 40K factions. Perhaps lung cancer ate them from within, instead of marauding Tyranids. 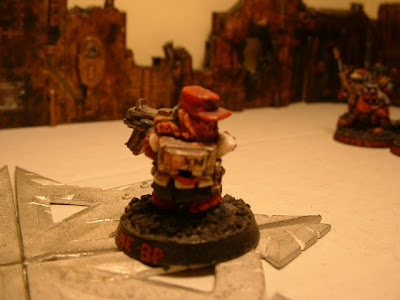 Sergeant Mauser von Dreyse from the back, lots of pouches and metal backpack. I think the metal backpacks are where they keep their gold, but the Squats maintain their silence on the subject. Blood for the Blood God, Skulls and all that, but Gold for the Dwarfs. 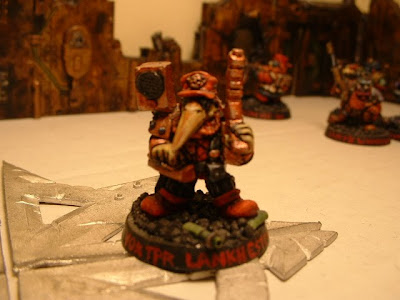 Next up is Vox Corporal Galil Lankhester, from the RT203 Space Dwarfs Command series, whom I mixed names up with Grom Atchison from the same series. Corporal Lankhester was given a Bird-Crossbreed mutation by adding a lengthy yellow beak from a Bretonian standard bit and painting his hands and face to match. I also increased the size of his Las Pistol with part of a second Las Pistol to make it look more like a Lasgun. More lasbits lay scattered at his feet. 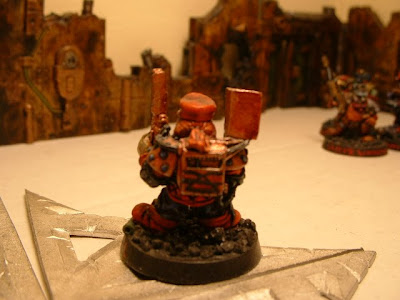 Vox Corporal Lankhester from the back, displaying his devotion to Khorne on his music maker. 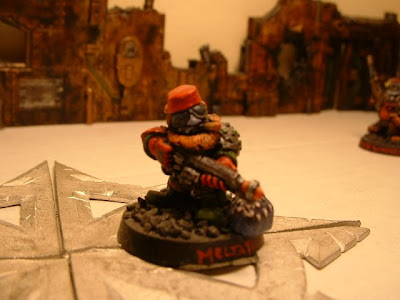 The special weapons trooper for The Underdeepers is Koch Wesson, with Meltagun. Another from the first Space Dwarfs series, with studded shoulder pad from a dead Ultramarine laying at his feet. 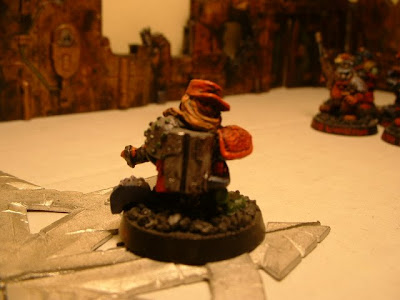 Trooper Wesson from the rear, looks like Squat Meltaguns require larger ammunition canisters than the Eldar versions. That, or one side is filled with beer.
Posted by Hungry Ghosts at 8:13 PM