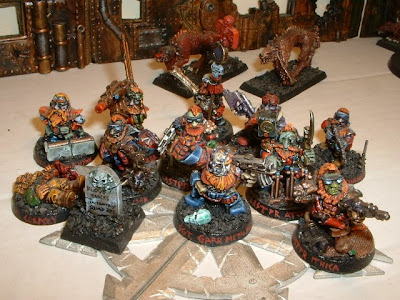 The first infantry squadron from the Rotted Hearth Platoon is the Blood Eagles, named for a gruesome execution method used in northern Europe around a thousand years ago. To make this squad I again used all minis from the Rogue Trader Space Dwarfs and SD Command series, in this case the minis who had uncovered heads. Two Flesh Hounds of Khorne frolic in the background. 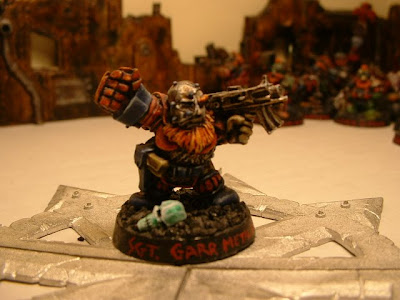 The NCO of the Blood Eagles is Sergeant Garr Metalhead, originally named Vikas Ingram and later known as Champion with Power Glove and Bolter 1. In 5th edition 40K, he is armed with a Power Fist and Bolt Pistol. I've left his Bolter alone because I hate the puny look of Bolt Pistols and wanted to keep the object in his left hand large to balance the impact of the large Power Fist on the overall composition of the figure.

The head of a Necron lies at his feet, which I've attempted to paint in a kind of ceramic sheen. I frequently use base debris to try out new painting techniques or designs. I also used it to create the illusion of a more dynamic striding pose. Garr's legs are actually parallel to each other and in line with his spine, while the only part of his body deviating from the standing straight position is his left arm. Placing the Necron head in front of his right leg makes it look like it is further back than the left leg.

Sgt Metalhead is my favorite of the three Space Dwarfs Champions, perhaps because because his metalhead reminds me of Robotech's Zentraedi Commander Breetai. Garr's skin is also painted in a light gray/blue to resemble Breetai, but I've also added an unhealthy pinkish tone since Sgt Metalhead is undead. 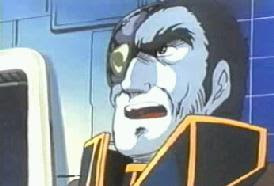 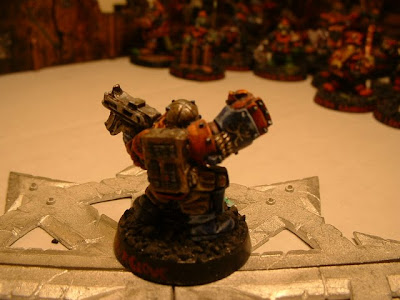 Sgt Metalhead from the back, with Space Marine style shoulder pads and jumbo size metal pack on his back. What are all those buttons for? Who is supposed to press them? What happens if he falls on his back? The mysteries of the Squats run deep. Edit 9 June 2010: I just noticed that the pictures are set up so they look like Sarge Garr and Breetai are having a lively conversation. 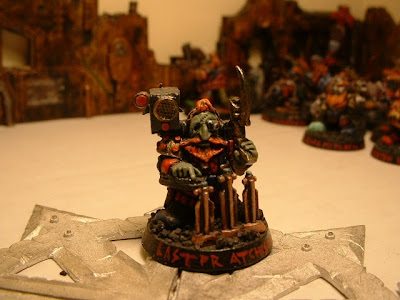 Next is Vox Trooper Grom Atchison, also known as Musician with Synthesizer 3. This Space Dwarf was sculpted with a deformed face to begin with, as if he were destined to succumb to Chaos. I painted him an unhealthy green, trying to give the suggestion that he spent some time drowned in a river. Since he is supposed to have a Lasgun under the current rules, I gave the appearance of additional length to his Las Pistol by adding a bayonet bit (it is a spike stolen from a Dark Eldar's helmet). He is another of the early Space Dwarfs with a rather static and planar positioning, so I put a small fence across the front of the base to create another axis at an acute angle and draw attention away from the static pose. The action on this mini is also in his midsection, where his hands are, and the fence reinforces that aspect by being about the same height. It's a metal bit from a Battlefleet Gothic ship. 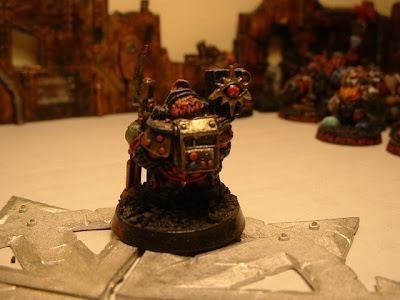 To compensate Trooper Atchison for his missing front eyes, I added an Eye of Chaos to the back of his speaker so he can see behind him. Also because the area is otherwise entirely smooth and boring. The side is also smooth and boring so I added a round bit that I think was originally intended as a weapon scope. From both the front and back, Tpr Atchison has many pleasant small circles in the design of his equipment and bionics. When selecting the bits to add to him, I tried to pick bits that introduced still more small circles. 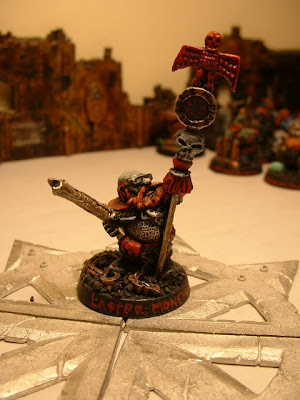 Corporal Montrose Moneybeak is the banner-bearer for the Blood Eagles, his banner providing reinforcement for the squad's name. This banner was grim enough that didn't feel the need to change it. I lengthened his gun with a small dragon head and greenstuff, to make it look more like a Lasgun and to create another longer straight line to balance the line created by the banner pole. It also continues the design theme of multiple faces on this mini. 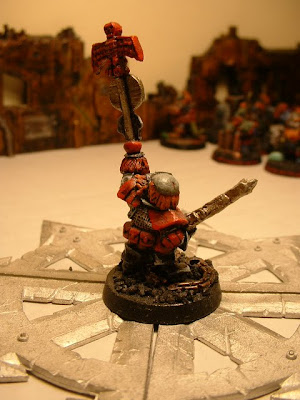 Cpl Moneybeak from the back, I tried to paint areas of red so the would continue the diagonal line created by the red parts of his banner. I also put in a tiny oozing head wound to break up the uniformity of his bald spot. The posture of this mini is oriented on long straight lines, which left a rather large empty space on one side of his base To counteract this trend, I added a long piece of rusting chain snaking around his feet, originally from a Dark Eldar Jetbike.
Posted by Hungry Ghosts at 2:08 AM