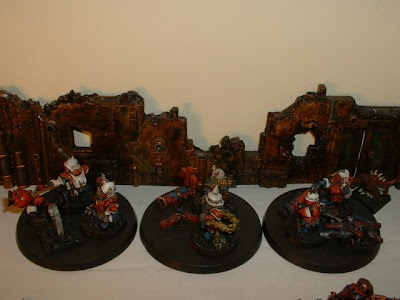 Back after a few days with more troopers from the Rotted Hearth Platoon (like the Hungry Ghosts, your Chaos Scribe is also part meat, part machine, and had to go into the repair shop). These are The Miracle Workers Heavy Weapons Squad, and they are indeed the Chaos Dwarf War Machines from 1988. I painted these fellows in the early summer, which is the most patriotical part of the year for United Statesians (betwixt Memorial Day and Independence Day). So The Miracle Workers were given the red white blue & gold color scheme of the American flag, and taunt the enemy from a distance with their bold white sniper-bait helmets. Miracle is also a near-anagram of America, and the overall name was meant to suggest their useful ability to destroy very big things. And, like Helen Keller, they play a mean pinball. 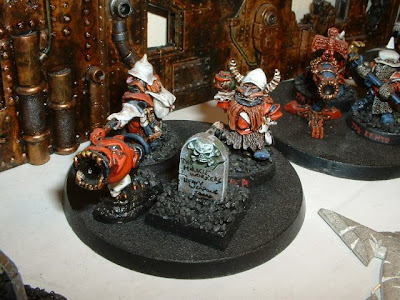 First are Mortar Troopers Maas Mauser and Geert Spltner, made from the Chaos Dwarf Petard war machine. The Petard has been given new mobility by being attached to the body and legs of a Mouser from the old Teenage Mutant Ninja Turtles series from Dark Horse. Yup, a 2nd Mouser appearance. I have 4, and they will all be used. Because they remind me of friendly little Zentraedi Battroids. Can't go very far into this army without bumping into a bit of the old Robotech. 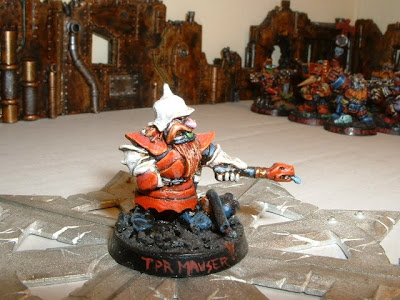 Here we see Mortar Trooper Maas Mauser from the front, with his blue tongue matching the snake's tongue. His name was inspired by the also red white & blue flag of the Netherlands and the Mouser-Petard. 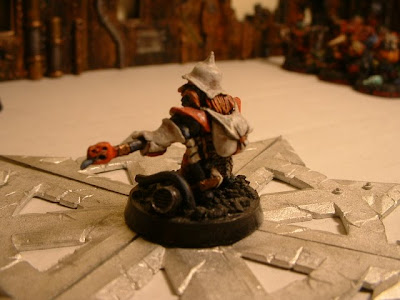 The remnants of industry ooze brown goo at Mauser's feet, a hollowed out Imperial vehicle bit and the vent part of a Space Marine backpack. Trooper Mauser is wearing another variant of the WFB Dwarfs backpacks. 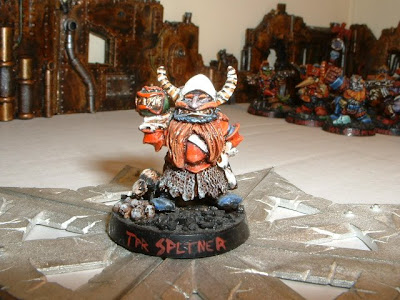 Next is Mortar Trooper Geert Spltner, another Dutch-TMNT name, but churned through the Rename-Intator 40000 a second time, changing his last name from Splinter to Spltner since 1/4 of your Chaos Scribe originated in the Splt region of Croatia. I tried to give the mortar shell an appearance somewhere between an evil little watermelon and one of the 1980s Madballz toys. 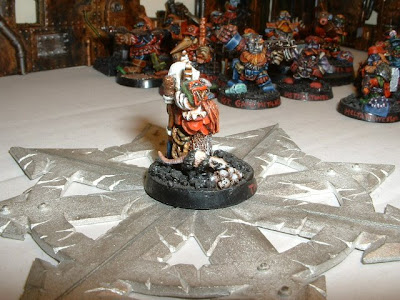 From the side, we can see that Tpr Spltner is using some Zombie intestines as a rope. Another Space Rat painted like a wee Panda is sniffing at a pile of tiny skulls (from the Warmaster Skeleton Bone Chucker). 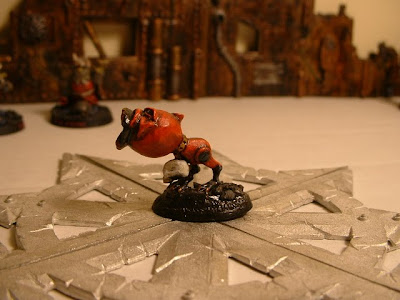 And the critter without which there would be no Mortar Team, the Mauser-Petard. To join the Petard head to the Mauser Body, I added a small Collar of Khorne with a dangling skull from who-remembers-what-Warhammer-sprue-since-they-all-have-skulls-now. The "big-head little-body" is not only one of the most primitive forms of humor, but also reminds one of the strange creatures in Hieronymus Bosch's paintings. The mobile Mortar is mounted on a GorkaMorka base. 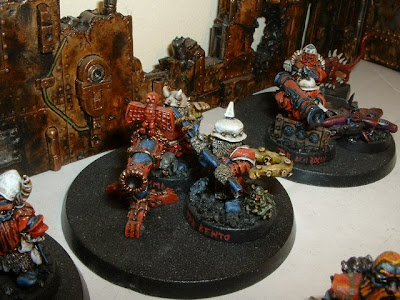 Next is the Las-Cannon Heavy Weapon Team, made from the Chaos Dwarf Swivel Gun war machine, fired by Troopers Bento and Mismo. The CD Swivel Gun has been converted into a Las-Cannon with the upper part of one of the Space Dwarf Command Standards. The SPC Standards were weak in certain areas and prone to breaking off, this one comes from Garand Steyr. The pole was removed from the wreath section so that it could be put around the barrel of the gun. The undead bird at the top goes nicely with the living-creature design of the Swivel Gun and Petard. 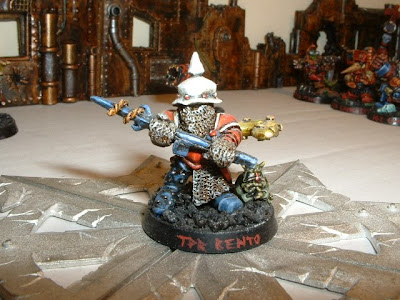 This week on "Oi, Wot's that Tentacle?" we have Las-Cannon Trooper Oka Bento. Just kidding, I'm sure we all know that it's Chaos Spawn Tail 3 from the early 1990s Spawn edition. One of my favorite tentacles, such nice suckers. I painted it a sicky green and pink because in my version of the 40k universe, Nurgle is everywhere, and provides tentacles to those who please Him even if they are not his followers. Bento is also accompanied by a Nurgling. Pet or Spy? A little bit of both, just like your cat. 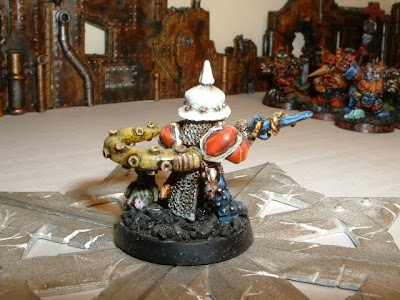 Here is Trooper Bento, his Tentacle, and our guest Nurgling from behind. Another dangling skull, this one from the CSM champion plastic bits. 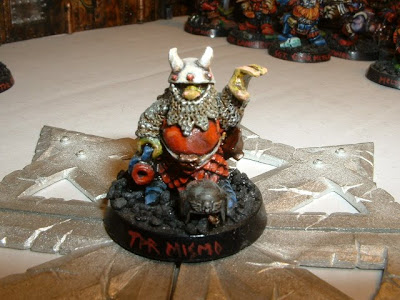 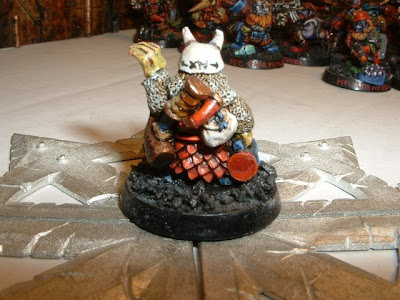 Trooper Mismo has been given his backpack from the old Empire Outriders metal bits. 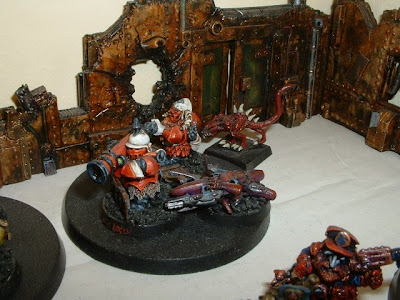 The third heavy weapons team is a Missile Launcher, also known as the Chaos Dwarf Bazooka. I love these heavily armored War Machines and Crossbow Troopers, they are a great design. Each team has one member with a pointed helmet and one with a horned helmet, among other similar design elements. This series is a good illustration of the transition in the design of Citadel Miniatures, toward producing more uniform troops for making Warhammer armies, compared to the incredible variety of the Chaos Dwarfs from the D3 and C16 series of the mid 1980s. Some may prefer the 1985 variety, some may prefer the 1988 coherence, I say collect them all. Big Hats too.

The Missile Team are accompanied by a Dark Eldar corpse. And a Necromunda Giant Rat skulking about to see if it can grab some Eldar nuggets. Sorry, Mr Rat, that Elf is still Chaos Squat food, and they haven't even finished his legs. 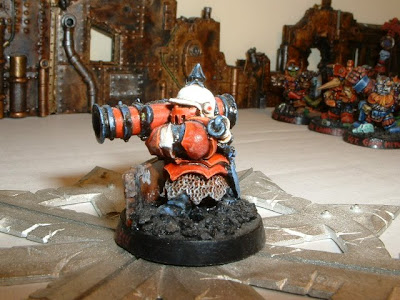 Missile Trooper Otto den Bosch up close. He hasn't been converted much, but a scope bit has been added to the Launcher, lit up in a similar color to the green from the Las-Cannon Team. 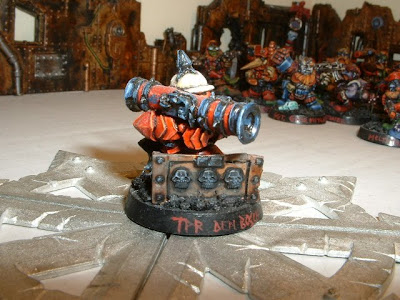 Trooper den Bosch is firing from the partial cover of a skull patterned wall, part of the treasure chest from the Mordheim Accessory sprue. 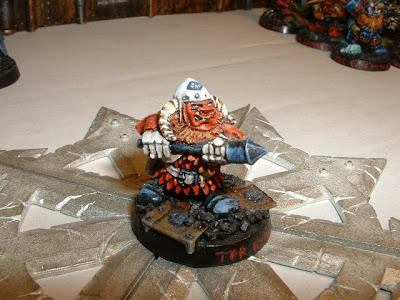 Last is Missile Trooper Wim Nymus from the front, with an XIV-Chaos Eye symbol on his helmet. He is standing on the broken bits of another segment of the Mordheim treasure chest. 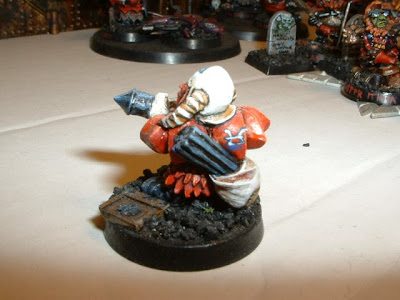 Trooper Nymus from the back, displaying his symbol of Khorne. I couldn't figure out any interesting way to convert him, so he got some extra details in the painting stage.
Posted by Hungry Ghosts at 3:23 PM