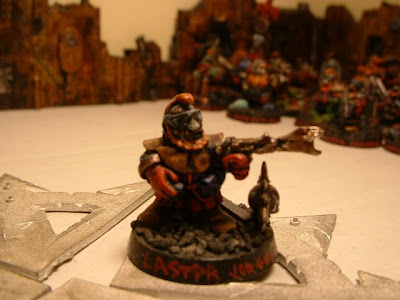 Our tour of the Blood Eagles Squad concludes with the 5 Lasgunners. First up is Krag Jorgensen, another of the RT03 Space Dwarfs to be dropped out of production before the compilation of the 1991 Blue Catalog.

Trooper Jorgensen was originally armed with a puny Bolt Pistol which I converted into a Lasgun by cutting off the clip and lengthening it with a small dragon head from a WFB musician of some sort. 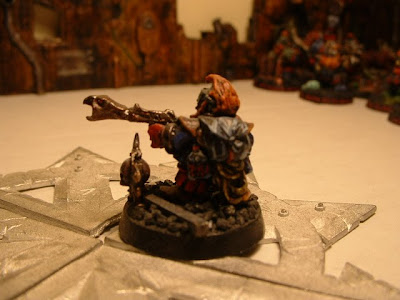 Jorgensen is another of the first series of Space Dwarfs to have a very boring back side. I gave him a plastic backpack from the WFB Dwarf warriors sprues, and have repurposed some Zombie Guts to serve as a length of rope. The empty area of the base was filled in a bit with a Chaos Skull symbol from the WFB Chaos Warriors accessory sprue and a broken bit of steel girder made from a leftover bit of sprue. 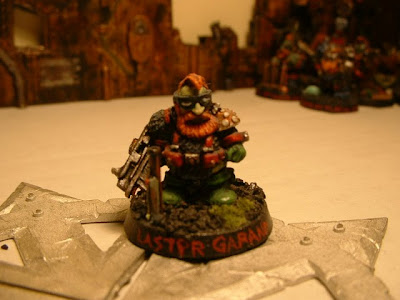 Sharing a hair stylist with Trooper Jorgensen is Trooper Owen Garand. He is one of my oldest Squats, bought in back in 1988 in a pack of 5 of the Bolter-armed RT03 Space Dwarfs. The extensive cutting that would be required (the Bolter is attached to his arm, shoulder pad, and boot) and a bit of sentimentality led me to leave the Bolters on all 5 of these Squats.

Once again, the static pose of the early Space Dwarfs left a lot of empty space on the base. I filled in a bit of green modeling grass just to have a little bit of vegetation clinging to life in the grimdark battlefield motif of the bases I use for the Hungry Ghosts. I also added half of a WFB rifle to create the appearance of a small exhaust pipe rising from an underground chamber, but am not too happy with it. It looks too much like the original rifle bit, so I may need to replace it. 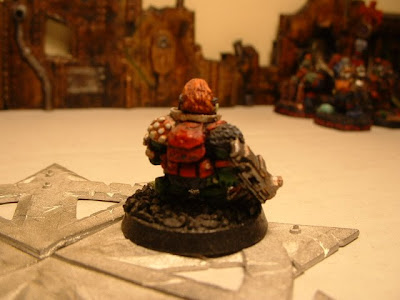 This is the second version of Trooper Garand released by Citadel. The first came with a separate jump-pack and nub on the back to attach it, but did not have a very long production life. As we can see, the second Garand replaced the nub with a cloth backpack. It is rather similar to Jorgensen's backpack despite the 20 or so years between production of the pieces. 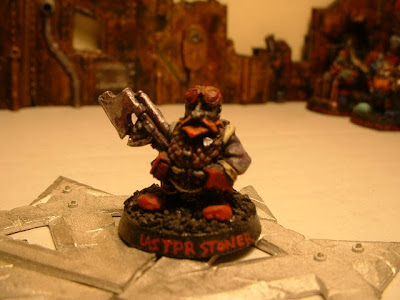 Trooper Colt Stoner is another of my 5 original RT03 Space Dwarfs, though in this case it is not entirely clear what his weapon is supposed to be. It seems to be a hybrid of Bolter, Lasgun, and Battle-Axe. He fills the base well for such an old model, so I haven't added much beyond my standard black fish bowl gravel to the base. I've been using the same bag of gravel for over 20 years now. 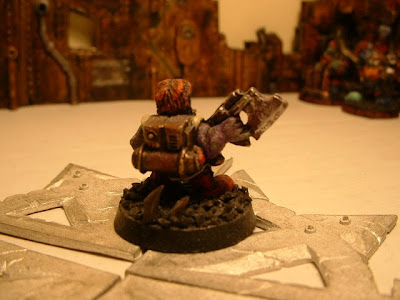 On the other way round, we can see that Trooper Stoner is carrying his own kidney dialysis machine on his back. The blades rising from the base provide a rare glimpse of the burrowing landshark of the Zardoz Omicron system. Quite the endangered species, as it is prized for its scales made of Unobtanium (how else is it going to burrow through stone?). 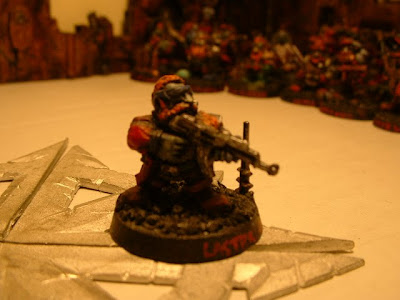 Next up is Lasgunner Enfield Chambers, another of the RT03 Space Dwarfs who somehow obtained the STC for the ancient Ak-47. Overall, not a very interesting mini in my opinion. I added a small antenna from a Battlefleet Gothic ship to the base, its thin pointy shape goes well with the thin pointy end of his gun. 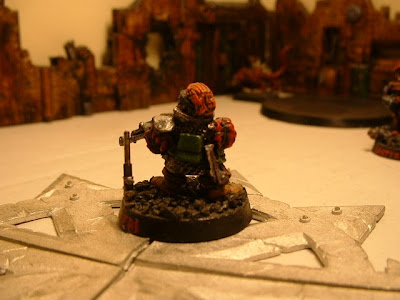 Trooper Chambers from behind, wearing his daypack and wrench. 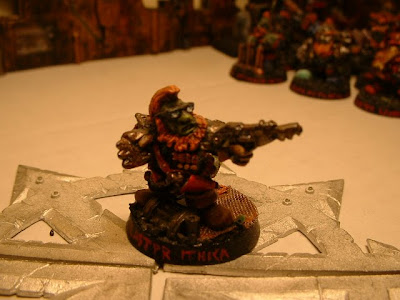 The last Blood Eagles Lasgun Trooper is Brew Ithica, from the RT302 Space Dwarfs Command series. I decided to go with a reptilian look for him, and painted his skin a drab green. I also removed his Chainsword blade, since our Las Trooper shouldn't have one, and added some greenstuff to fashion spiked brass knuckles to better bash the enemy. Or friends. Rabbits. Whatever, Blood for the Blood God. Speaking of blood, do Necrons have any? And if not, can Khorne see them? Circuits for the Circuits God? 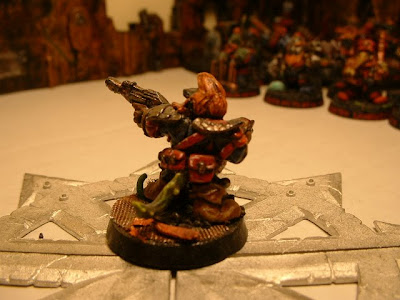 Continuing the reptile scheme, I added a mottled green and yellow tail to his rear, a bit from the plastic Chaos Spawn sprues. As can be seen from both views, I've loaded his base up more than usual, with leftover Imperial Guard bits and some bits of wire screen and tube I found laying around. His lizard tail has been surrounded by as many opposing colors as possible to make it stand out even more.
Posted by Hungry Ghosts at 1:31 AM