Warhammer 3K Pulling the Beards of the Ancestors: The Spacefarers Rules 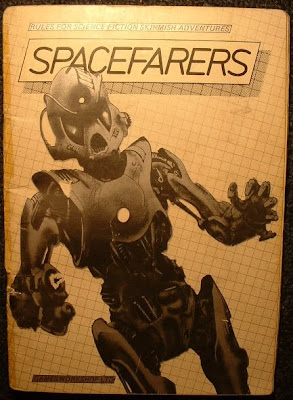 The Spacefarers Rules for Science Ficton Skirmish Adventures was published by Games Workshop in 1981, written by Andy Murkin, Nick Henfrey, and Dave Morris, with illustrations by Tony Yates and Jim Pitts.

The rules were a precursor to Warhammer 40K: Rogue Trader, set in the year 2700 or so, and a series of miniatures were released for use with the game as well, 15mm scale or so.

We will take a brief tour of the rulebook, despite the fact that we should be painting our many partially finished Chaos Squats. 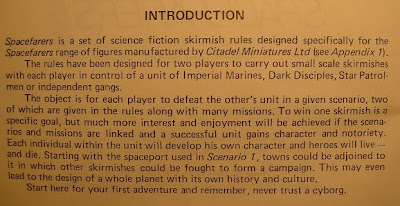 p. -2: “Remember, never trust a cyborg.” Lies. Vicious Lies. Have we learned nothing from Iron Man?

(yes, there was a time when GW did not count the covers as pages)

p.2: Winner of the "It's a Hobby not a Game Award" - “It is important to be able to identify figures quickly during the game. This may be done by color-coding them, or by painting a number or letter on the back or base of the figure.”

p.4: A man “cannot see through or fire through ...walls over 1.5 metres high.” Of course they can't. But we know what you really meant and it is even dumber. 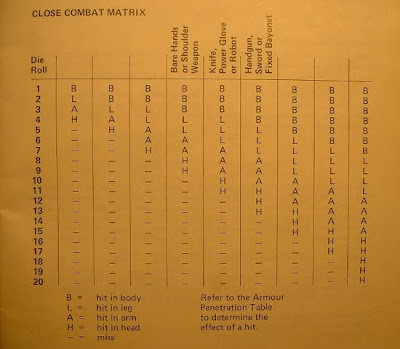 p. 21: Close Combat Weapons - Is it a knife? What kind of knife? It's a Bowie Knife, in outer space. Ground Control to Major Predictability.”Used by virtually everyone.”

p. 22: “Other Vehicles [than Jet Cycles]: These rules are not intended for use with larger combat vehicles, and it in envisaged that few will be in use anyway because of their size, vulnerability and cost.” That's Right: No need for anything but a 90 kph jet cycle.

And Robots - “The Devries Cyberbrain Mk. IV is a superb example of cybernetic engineering, but it has long since reached the limits of its potential. Because of this all robots have similar mental abilities.”

Ancestor's Tool Belt! F in Science! F in Economics! Back to Duplos for you!

2016: Mandatory Future Game Nuclear War Between US and USSR

2450: Jonathon Mgobu III, owner of the Sol-Centauri star-flight corporation, declares himself Emperor, after his corporation violently monopolizes interstellar travel. Now we see the violence inherent in the system. 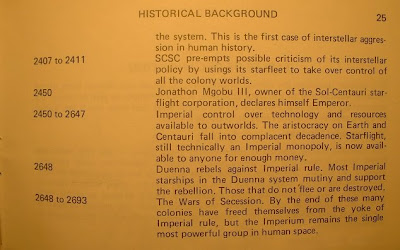 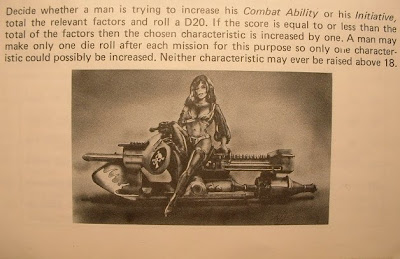 p. 38: A picture that can only be appreciated by noting the text above - "man" is consistently used throughout the rules to refer to everyone but robots. The question is, is this woman an "Adventuress on Jet Cycle" or a "Star Lane Pirate Girl on Jet Cycle"? 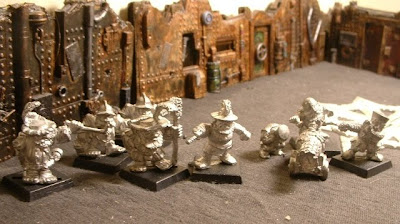 Buying Dwarfs that We Don't Need
Posted by Hungry Ghosts at 9:42 PM 3 comments: