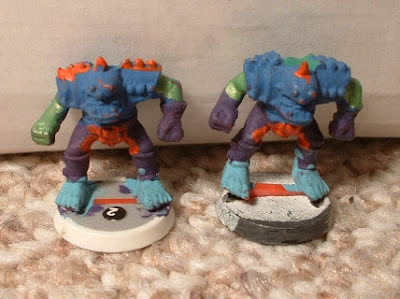 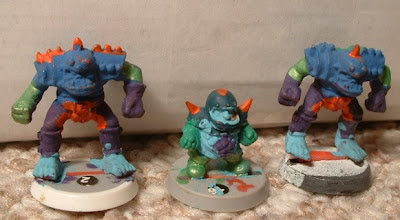 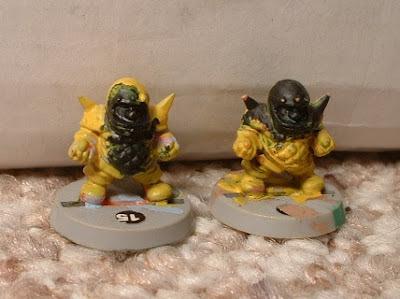 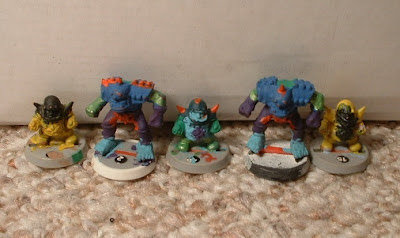 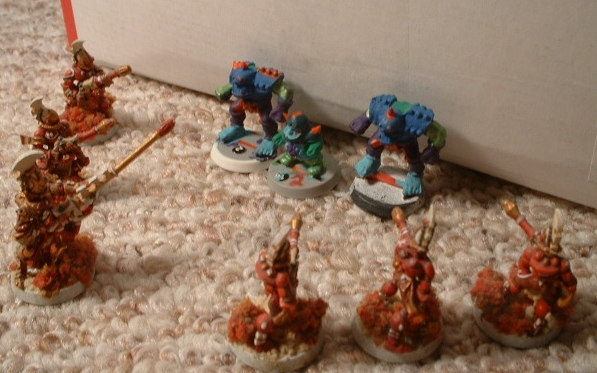 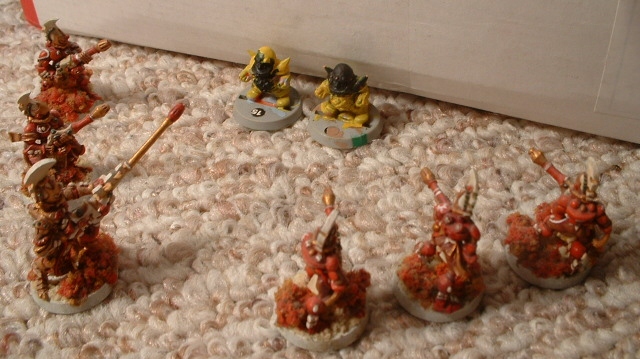 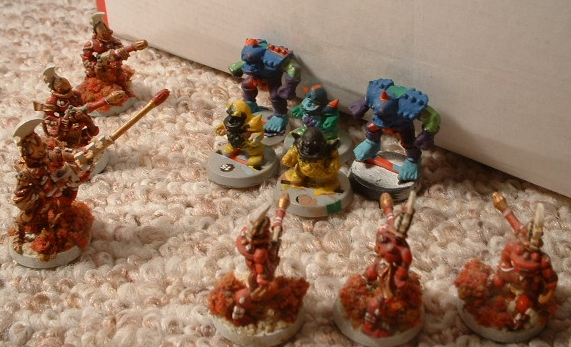 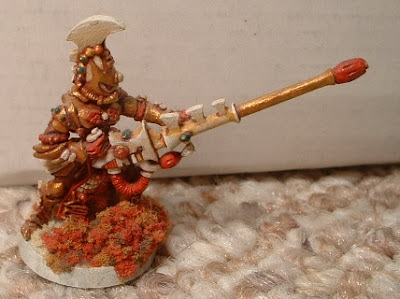 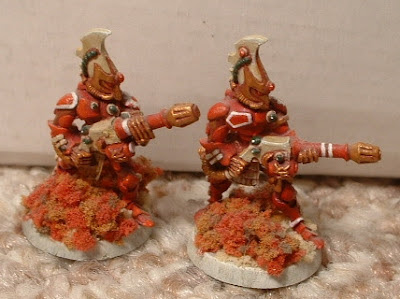 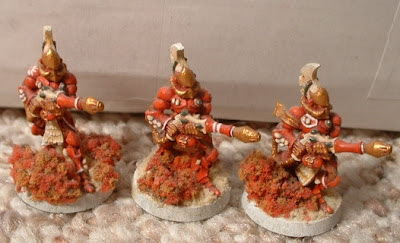 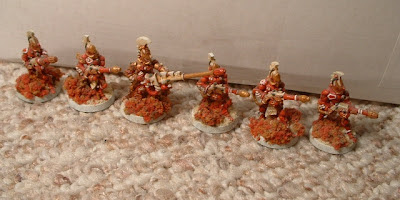 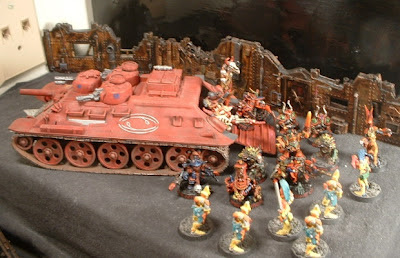 The Hungry Ghosts have adopted a Big Red Armored Personnel Carrier from the defunct Soviet Union. Purchased from the Red Army's Annual 1 May International Worker's Day to 8 May Victory in Europe Day Red-Tag Sale, it is a welcomed addition that has soothed Hungry Ghost's lingering sadness at never getting a Star Wars Rebel Cruiser or a GI Joe APC while a Beardling. But the first foreign nation Hungry Ghosts went to was the USSR. You can still buy a Rebel Cruiser, but you can't do that anymore. 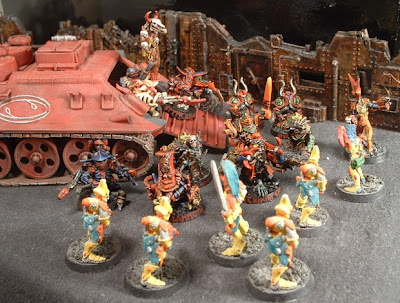 Here we see the Burnt Scorpions Storm Troopers charging from the rear to battle some pesky Eldar. The more observant webizens may notice that there are more Burnt Scorpions than in the past, but we'll get to that later. 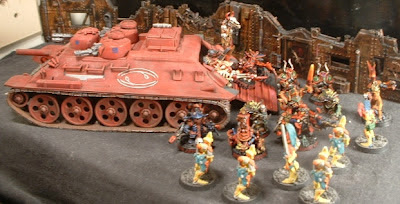 Our APC is made from a Soviet T-34/85 hull. Our T-34 was designed in the late 1930s and hit the front lines of The Great Patriotic War (aka the eastern front of World War II) in 1940. Designed by Mikhail Koshkin and Alexander Morozov, the T-34 is the tank with the 2nd largest production number of any tank (the T-54/55 is first) and is still in use by Terran armies today. 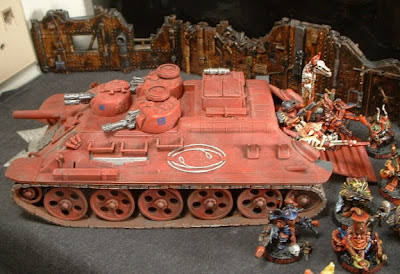 This T-34/85 was transformed for the Warhammer 40K universe as an APC by using a 1/35 scale model (compared to the roughly 1/72 scale for Warhammer). The turret was replaced with 3 smaller 1/76 Sherman Tank turrets, and the original main cannon was shortened and placed in the front. Assorted Warhammer guns and vehicle bits were added as well. 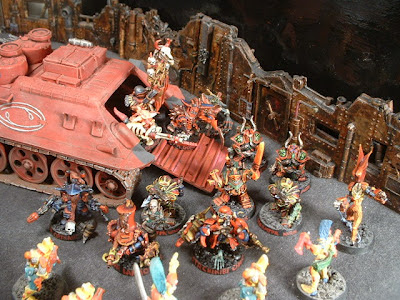 This produced a vehicle that a bunch of Squats could plausibly fit in. Unlike certain other Bag-of-Holding 40K transports.


All of this work was done by Time DuPertuis of Armorcast, originally intended for Ork use, but we will not hold that against him. 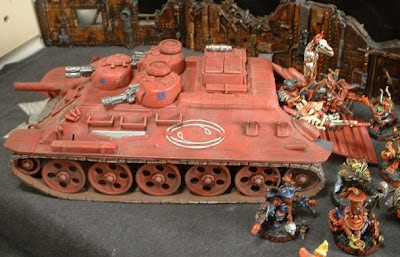 What is nice about the T-34/85 conversion is that it has a symmetry unmatched by other military vehicles looked at by Hungry Ghosts on eBay and elsewhere.

This 4-fold symmetry of 1:2 relationships yields the number 8, the number of arrows in the Chaos Star and the Sacred Number of Khorne. And thus we shall name our APC The Mouth of Khorne. 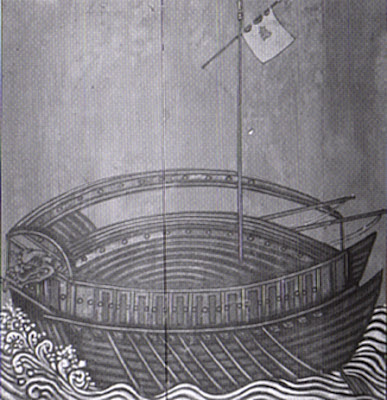 So what does all this accomplish? Fulfillment of Hungry Ghost's desire to have a land-version of the Korean Turtle-Ships (Geobukseon or Kobukson) used against Japanese invasions by the legendary Admiral Yi Sun-sin in the late 16th century. They were based on 15th century Turtle-Ships, and intended for use as a close-assault vessel. 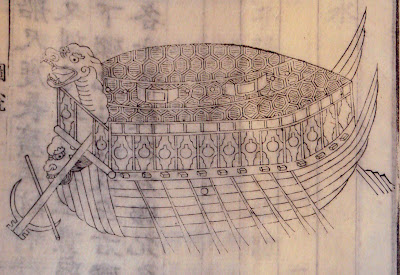 Here we see another Turtle-Ship. There is debate as to whether Geobukseon were the first ironclad vessels used, but no debate that they had lots of spikes and dragon heads attached to the front that released noxious smoke or cannon fire. Dragon heads and lots of spikes are mandatory for any armored vehicle in the Legios Moriad XIV, so the final form of The Mouth of Khorne will more closely resemble the mighty turtle.


The Hungry Ghosts will tolerate no comments about Dwarfs and Turtles sharing speed-impairments; all comparisons shall be regarding powerful armor and an ability to traverse even the roughest of terrains. 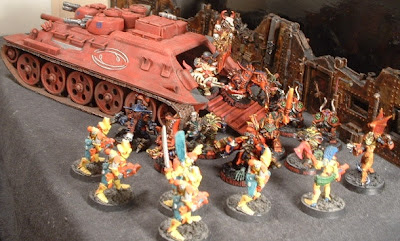 Another view of the Burnt Scorpions emerging from The Mouth of Khorne. Hungry Ghosts is still not sure what the final carrying capacity for the APC will be. But it probably won't be finished for a couple of years, so there is time to think about that. A Chaos Squat equivalent to the Imperial Crassus Armored Assault Transport may be thing to do. 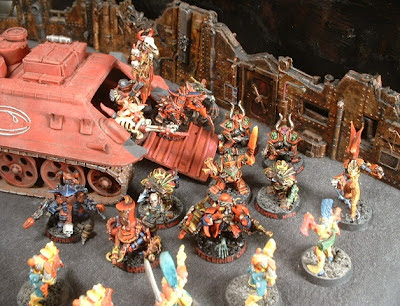 One more just because.
Learn more about Geobukseon here: http://en.wikipedia.org/wiki/Turtle_ship