Back from a word from our sponsor, but still scatterbrained. When Hungry Ghosts was in college, wearing our sponsoring Pantera Cowboys from Hell shirt, he was friends with a professor who enjoyed discussing Greco-Roman architecture (cause that was his job) and one such discussion topics was the "Yeshua ben Pantera" theory. For those lacking in Semitic linguistics skills, that means "Jesus, son of Pantera".
The "Jesus, son of Pantera" theme had been in religious studies since the 2nd Century AD, and 'twas for centuries dismissed as pagan lies.
Then came the construction of the Bingerbrück Hauptbahnhof at (for the time) the boundary of the Großherzogtum Hessen and the Rheinprovinz of Preußen in the late 1850s. This turned up a Roman cemetery containing a burial marker with an inscription belonging to a Roman soldier bearing the name 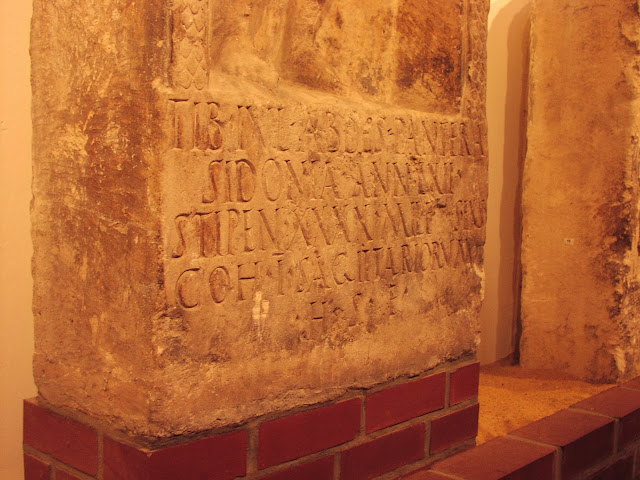 Tiberius Iulius Abdes Pantera
From Sidon, a city well known in biblical days, including for its place in Jesus's preaching tour of the region. Who is said to have lived 62 years, with 40 years of service in the Imperial Legions. But little else is known. Hungry Ghosts is also watching Die Römer im Südwesten (Germany) right now. Which is where Bingerbrück is. One of those places that are important that you've never heard of, Bingerbrück was the target of at least 7 major bombing missions in WW2. 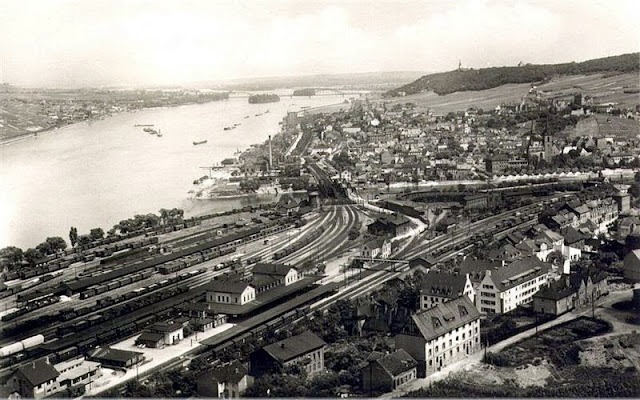 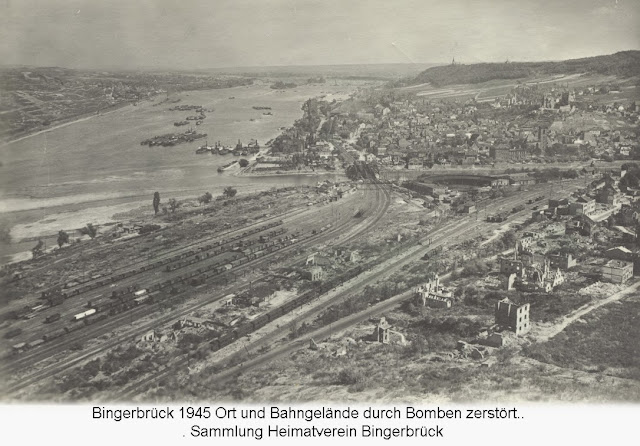 After.
Bingerbrück is the link from the left-bank Rhine railway to the Nahe valley railway, should one desire to travel from Mainz to Metz. Which is perhaps a surprisingly popular thing to do, or to prevent others from doing. Even the Swedes attacked in 1632.

Now that we have mentally traveled from the southeast frontier to the northwest frontier of Imperial Rome, when we last saw Chikibi ... he had been spontaneously mutated into another character,
Marbo Machinder 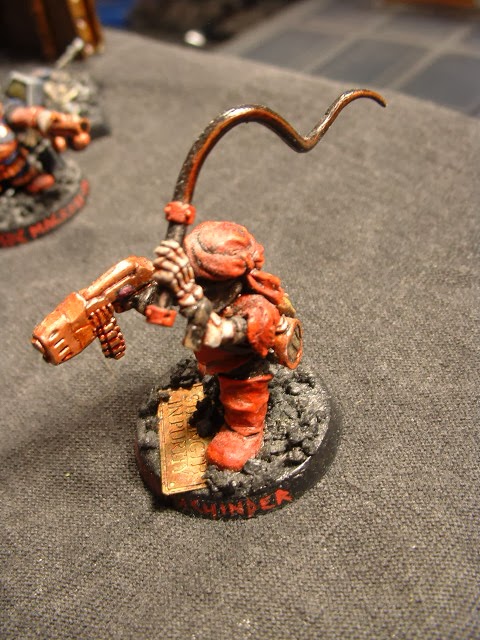 "strength in purity" the dwarf with the necrotic arm disagrees 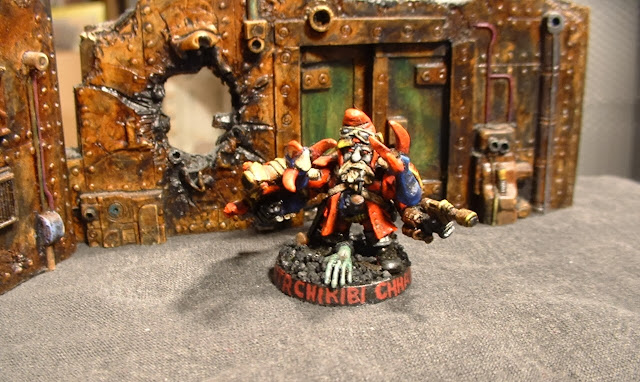 There he is, coming through the door... 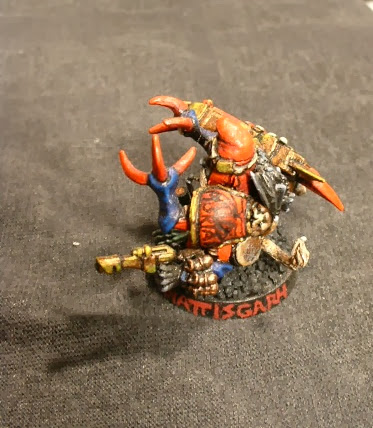 Here we have the left shooty-side of Chikibi. He is wielding a Las Pistol from the old Rogue Trader Squat/Imperial Guard weapons sprues (yes, sometimes someone actually uses one of them). Of course Las Pistols mostly suck, so Chikibi's humanoid wrist is wrapped with grenades... 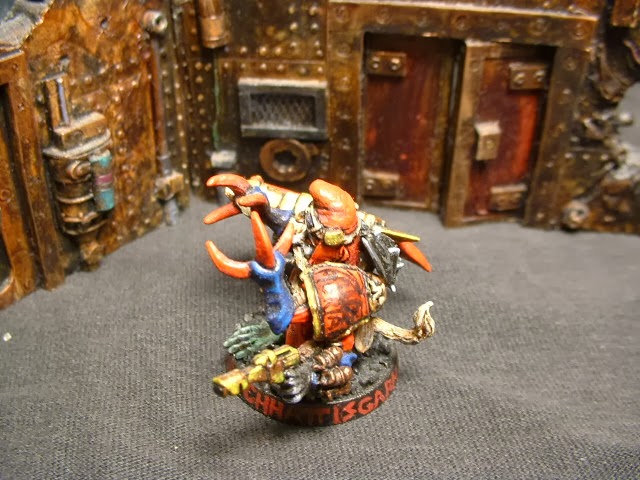 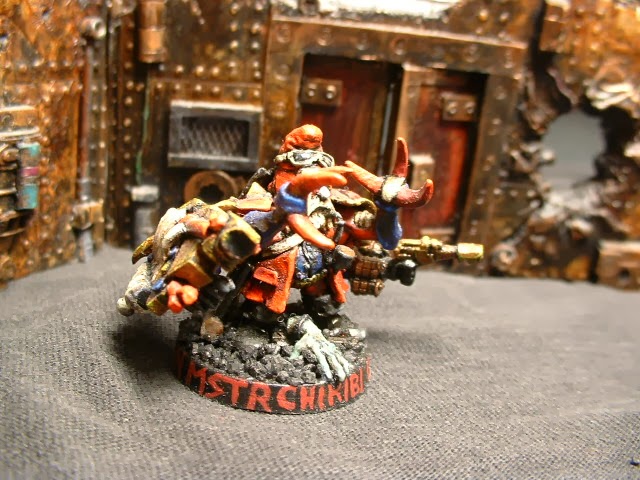 ...around.
Now you're thinking "Hey, sure he's got four arms, but two of the three others have skull-crushing claws and the other has a gun so big it needs its own character sheet strapped to it. So what's he going to do with those grenades?"
If Chikibi is somehow reduced to relying on his grenades, he will use his Chaos Gift of Sheer Anger to ram that fist into whatever passes for a mouth of whatever put him in the state of Sheer Anger, always hits/no saves, and pops the pins with his Willpower.
He's been told the arm will grow back. It will grow back. 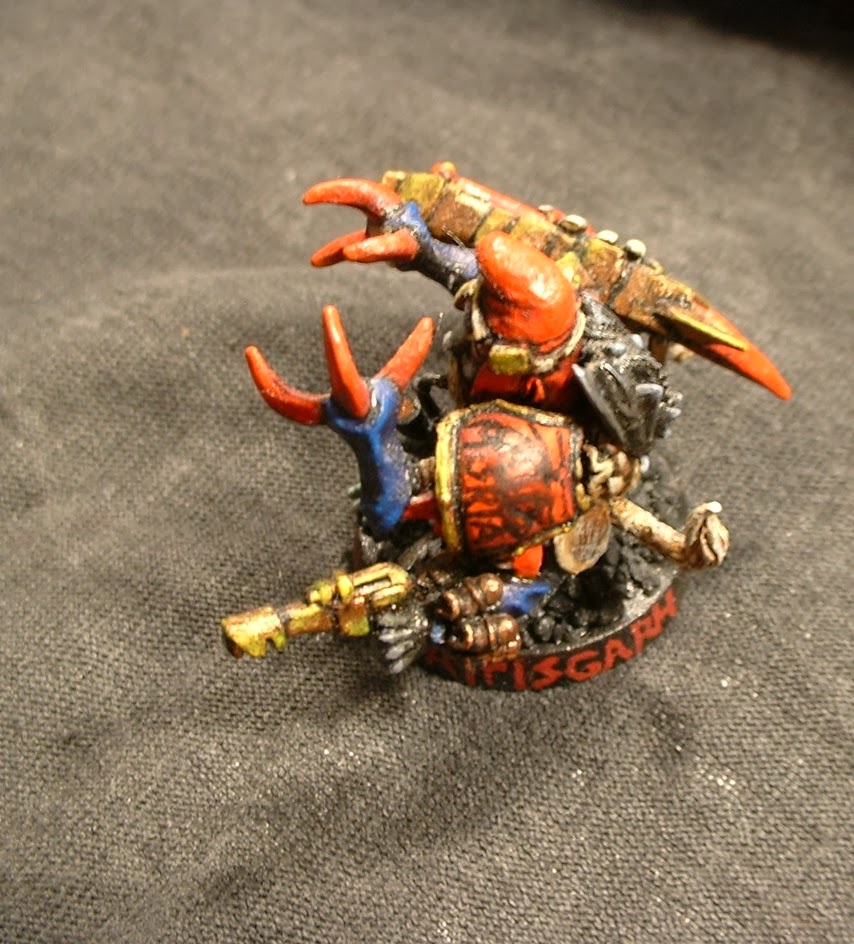 The weird shape of Chikibi's shoulder-region made finding the right bit of armor not a problem at all, because I used another piece from the Ancient Skeleton Army sprues. 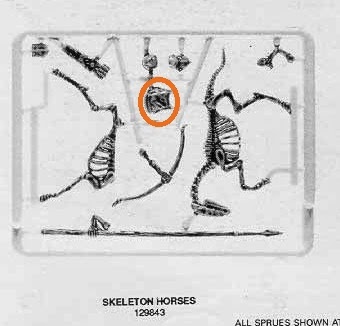 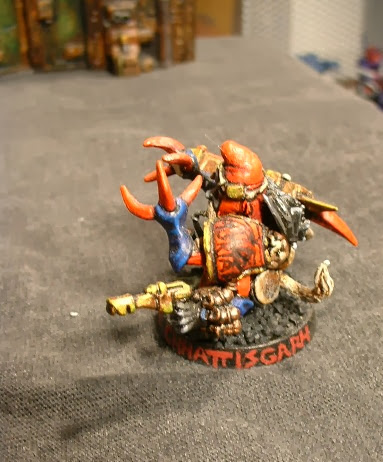 Didn't even have to change the rotation from the sprue.
So our crunchy-crunchy claw-arm has a wide range of movement available through the waist ridge of the plate, while the las-grenade arm pokes out as intended by the Undead, the left arm side. Chikibi's head can rotate about thanks to the curved edge for the right arm, and his rounded sack full of sugarplums and children's dreams is accommodated by the neck section. A frame joined unto a fearful symmetry. 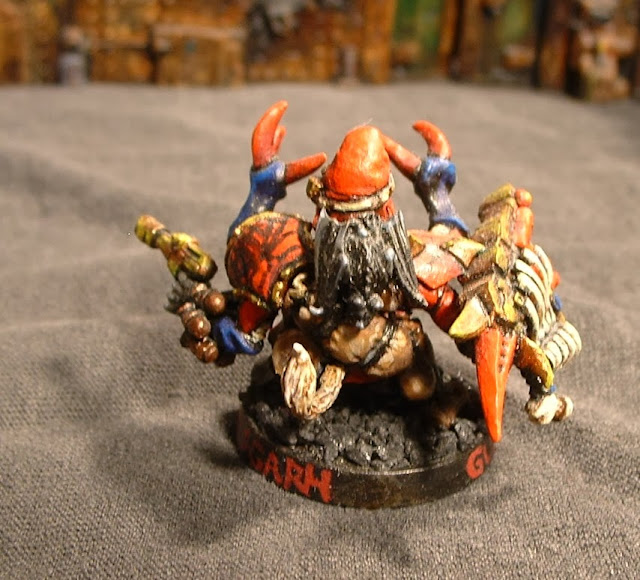 The symbol on the breastplate is a variant of one of the Hungry Ghosts symbols: 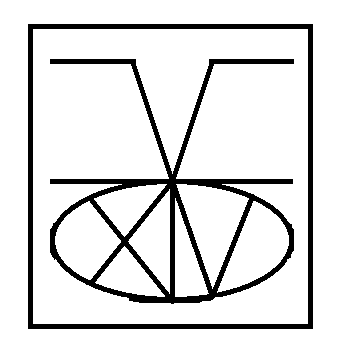 But even with the smallest tip pen, it still looks a bit crammed, and is nigh impossible to photograph well. 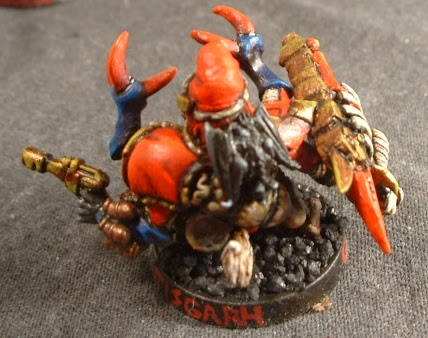 Here we have an older picture, before the addition of the symbol. It is not terribly satisfactory either, with its expanse of red. So what to do here... 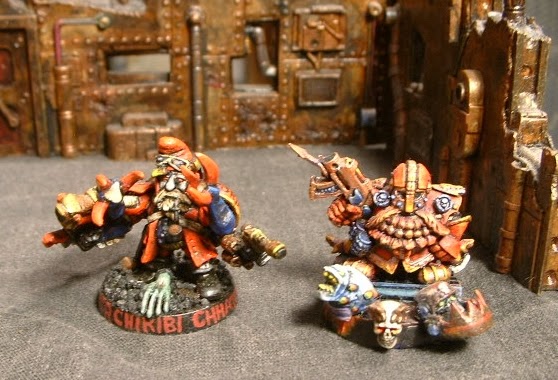 More pictures: With The Grudge Master 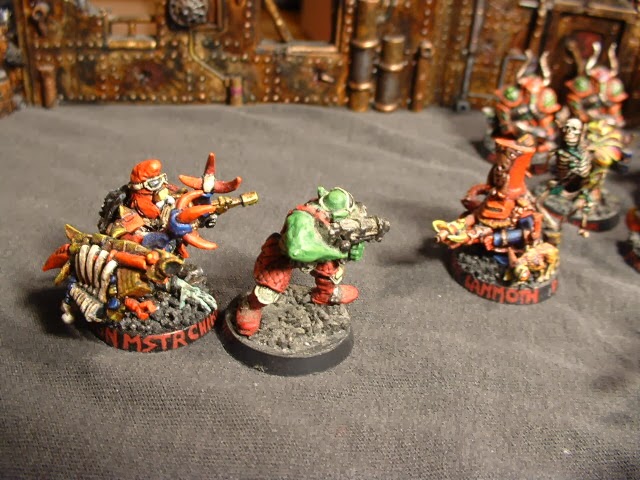 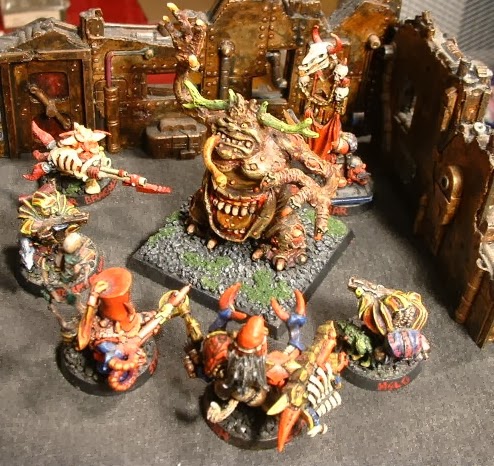 Combating the Other Green Menace,
well, mostly brown, in this case. 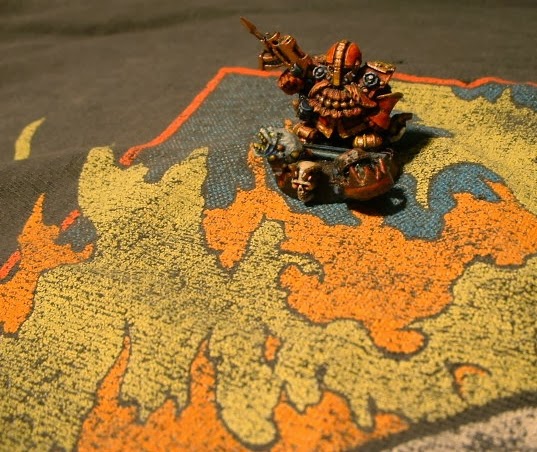 The Grudge Master fears no flame. 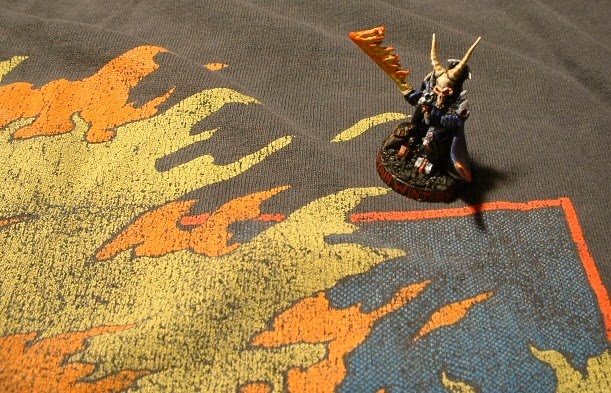