A Word From Our Sponsor With The Grudge Master

Hungry Ghosts is cranky today due to elevated pain levels that are being very resistant to combative maneuvers. So we will take a small excursion to focus on one of the background players on the Hungry Ghosts team (literally). 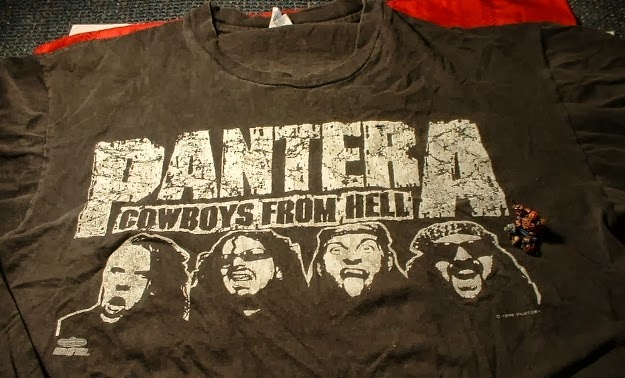 Continuing the tradition of using ancient t-shirts that no longer fit, this year's Hungry Ghosts troopers have been displayed on a 1992 Pantera Cowboys From Hell shirt. 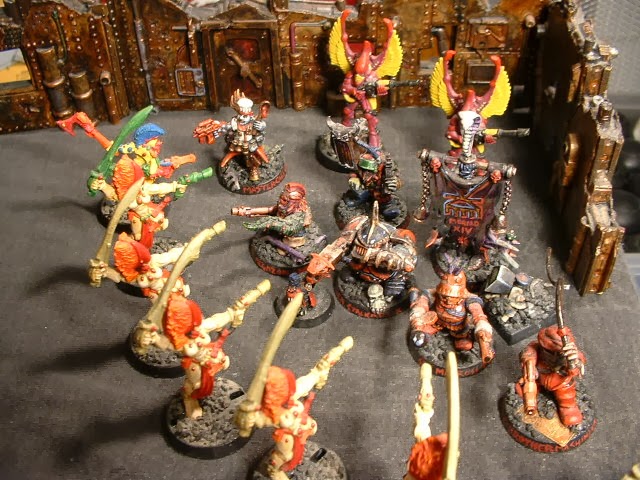 Wie So... our former field of battle was a Judas Priest Painkiller shirt, from 1990. 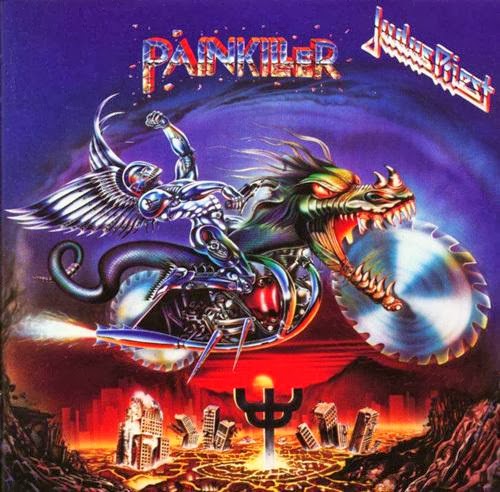 But this Rider of the Metal Monster, Breathing Smoke and Fire, due to incarnation in form of a nylon-cotton blend, got rather icky after two years in a basement apartment in Chicago. 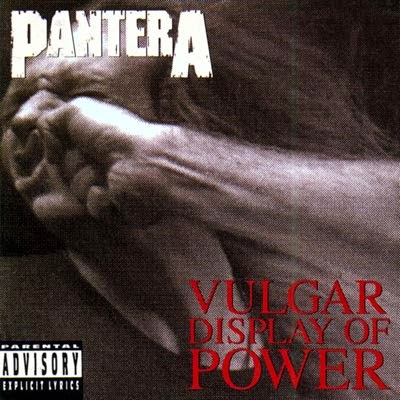 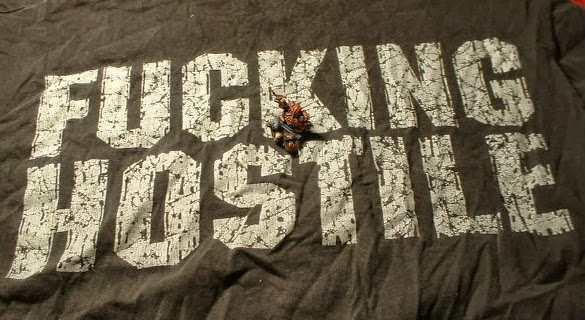 This album was renown for, in addition to general awesomeness, the name of its 4th song. Coincidentally, such is the default mood for the Hungry Ghosts army. Though The Grudge Master confidently brings it to a new level of power.

Purchased at the September 4 1992 concert at the Roseland Ballroom in Manhattan (opening act, a then-unknown White Zombie), Hungry Ghosts wore this shirt at the start of his orientation at college the following day. 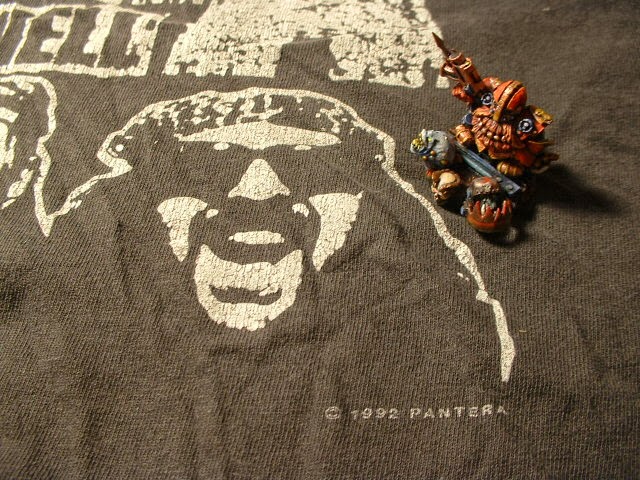 This shirt is also the "Diamond" / "Dimebag" Darrell Abbott Memorial Shirt. A powerful influence on the heavy metal guitar sound for over a decade, Dimebag was murdered by an audience member at a Damageplan concert in December 2004 in Columbus Ohio. Three others were killed and seven wounded among the band and audience who did not refrain from acting:

The gunman,  Nathan Gale, shot Abbott 3 times to the head, the third shot killing him instantly. Gale continued shooting, killing three others and wounding a further seven. Gale fired a total of fifteen shots, stopping to reload once and remaining silent throughout the shooting.
Jeff "Mayhem" Thompson, the band's head of security, was killed tackling Gale, as was Alrosa Villa [concert hall] employee Erin Halk. Audience member Nathan Bray was killed while trying to perform CPR on Abbott and Thompson. It was rumored that one crowd member leapt in front of the gunman, saving the lives of several band members. Damageplan drum technician, John "Kat" Brooks, was shot three times as he attempted to get the gun away from Gale, but was overpowered and taken hostage in a headlock position. Tour manager Chris Paluska was also injured.
Seven police officers came in the front entrance, led by Officer Rick Crum, and moved toward the stage. Officer James Niggemeyer came in through the back door, behind the stage. Gale only saw the officers in front of the stage; he didn't see Officer Niggemeyer, who was armed with a shotgun. He approached Gale from the opposite side of the stage to avoid hitting the hostage and fired a single shot just as Gale looked towards Niggemeyer, striking Gale in the face.
(Wikipedia, http://en.wikipedia.org/wiki/Dimebag_Darrell). 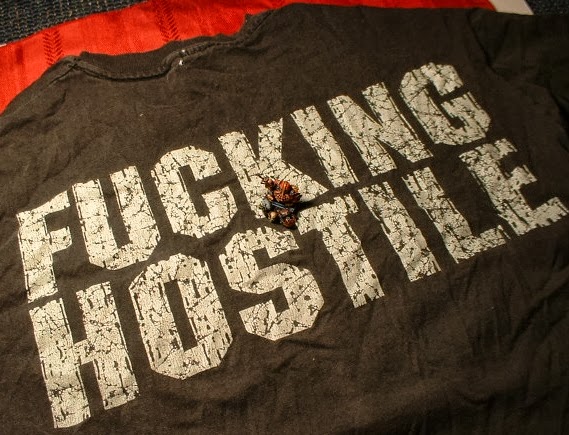 Continuing the spiral of history, Dimebag Darrell and the other members of Pantera recorded Light Comes Out of the Black with Rob Halford of Judas Priest for the 1992 soundtrack to the Buffy the Vampire Slayer movie.
Posted by Hungry Ghosts at 11:30 AM 2 comments: 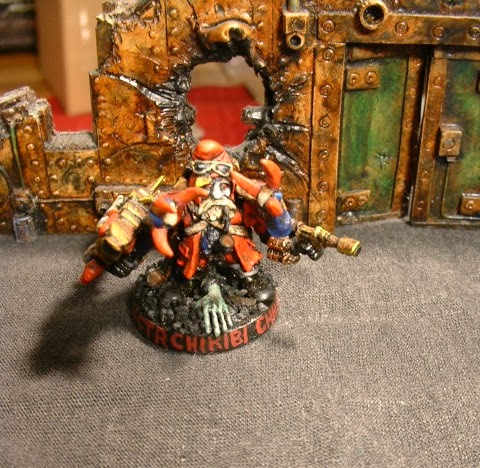 It has been a small amount of time since we last saw a completed Hungry Ghosts Trooper. Well, small if one uses the Entish Calendar. But here we have Gunnery Sergeant Chikibi "Chitty Chitty Bang Bang" Chhattisgarh. He is our equivalent of Imperial Guard Gunnery Sergeant "Stonetooth" Harker. 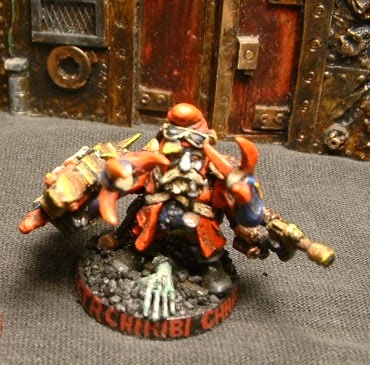 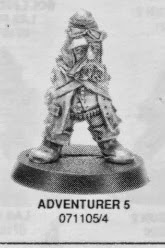 This is what he once was. 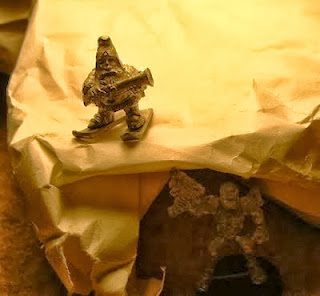 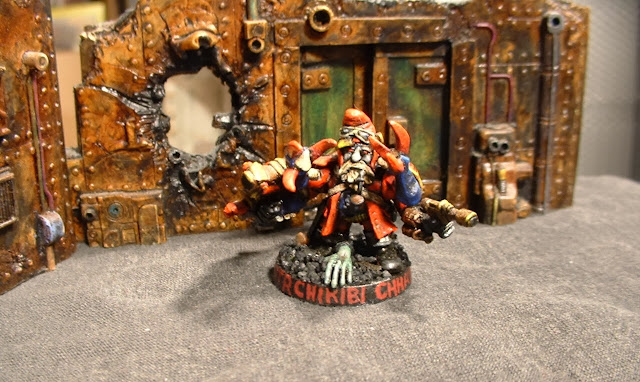 So Chikibi is mainly formed from Squat Adventurer 5 supplemented with a pair of Rogue Trader Tyranid Genestealer Arms. Both are the double-arm type, with the skull-cracker claws for the top arm and the shooty humanoid arms below. He has been given a traditional greasy zombie skin tone and red eyes to emphasize that, yes, he does want your brains.

While on the topic of wanting brains, Hungry Ghosts would like to direct your attention to a recent archaeological find of several 4000 year old corpses from Seyitömer Höyük in Turkey with remnants of brain tissue present. Apparently, they were victims of an earthquake, which started a fire in the settlement, but buried these villagers in a way so that the heat of the fire could reach them but not the flames. The result was brains boiled in their own juices, with the fatty myelin sheathes of the brain, combined with metals in the soil, creating a decay-resistant gooey gob of brain in each skull.

Earthquake rubble, fire, skulls, and metal have been staples of the Chaos Dwarf Cookbook for millennia, and now we have the millennia-old brain jerky to prove it works. Your Elf Waybread and maggoty hardtack will last for months, perhaps years, but not this long.
http://tinyurl.com/brainboiled (Article in New Scientist)
http://www.karger.com/Article/Abstract/334353 (Link to full text with pictures) 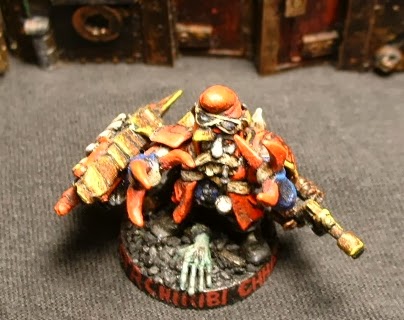 If you are a fellow enthusiast of using paint colors that aren't made anymore, Chikibi's zombie skin was made from your standard Blue Grey and Space Wolf Grey, with some generic white. But the key to the unsettling slick tone (which does not photograph well) is the obscure Ash Wastes Grey, from the Epic Battles Paint Set (Horizon Blue works well too). Codex Grey and one of those nasty high-particulate 1990s washes in dark green was used to distinguish the merely dead hand on the base from the zombie flesh of the Chaos Squat. 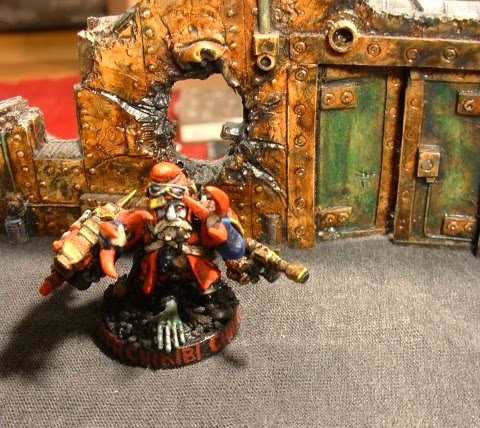 With the addition of a nice pipe filled with Chaos Tobacco (WFB Dwarf bit), Chikibi is done from the front. 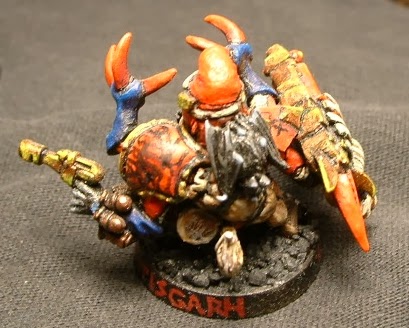 From the back, we can see that Chikibi proves to be the most well-prepared Squat Adventurer, with his bulging sacks of, well, let's just leave it as "stuff".

Chikibi is also impossible to surprise, as he (literally) has an extra pair of eyes on the back of his head. Yes, Bruce the Bat may not have the greatest set of peepers in the ocular sense, his auditory peeping can detect the slightest hint of future victims. And he has a keen sniffer. 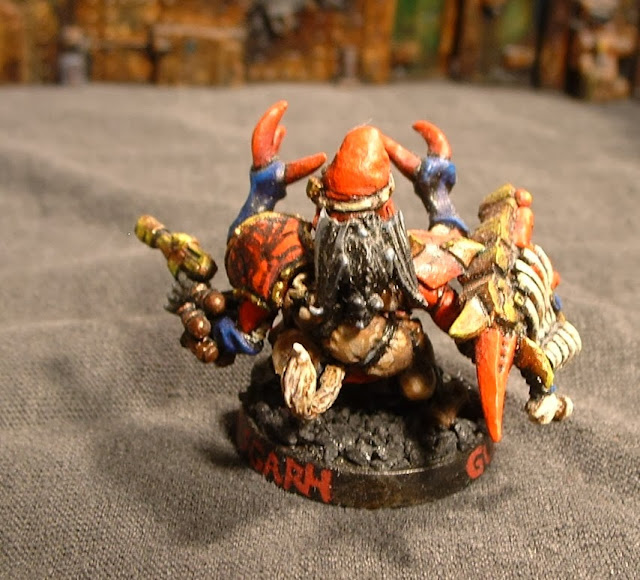 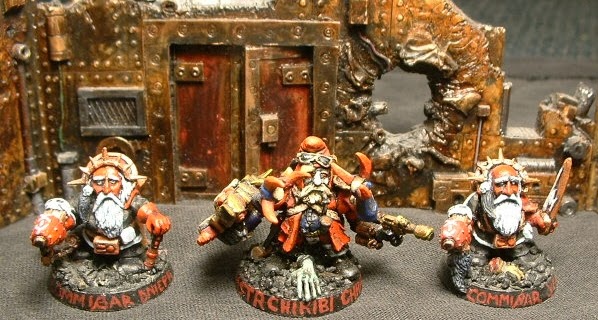 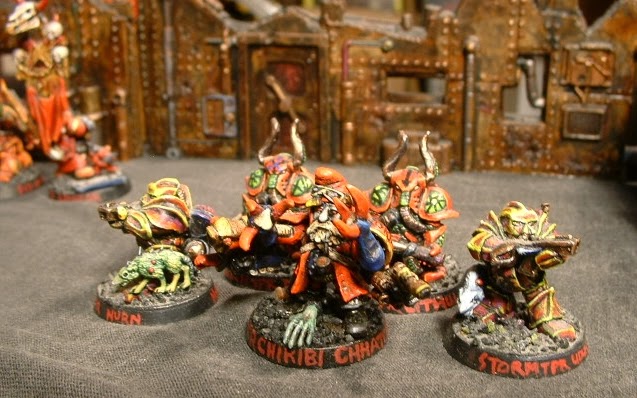 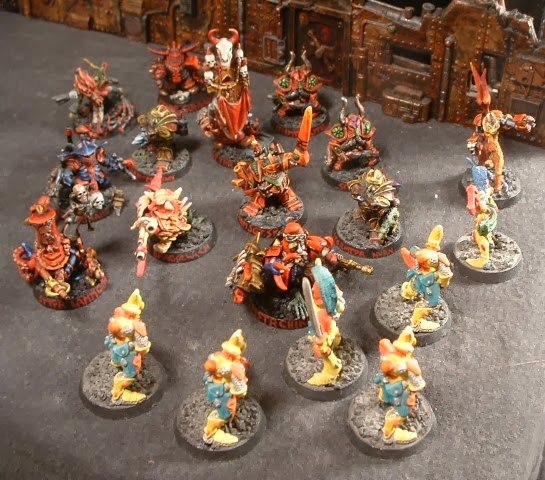 Leading the Assault Against the Pointy Ear Menace 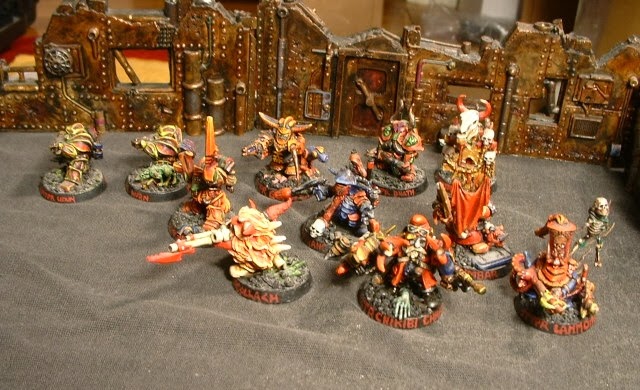 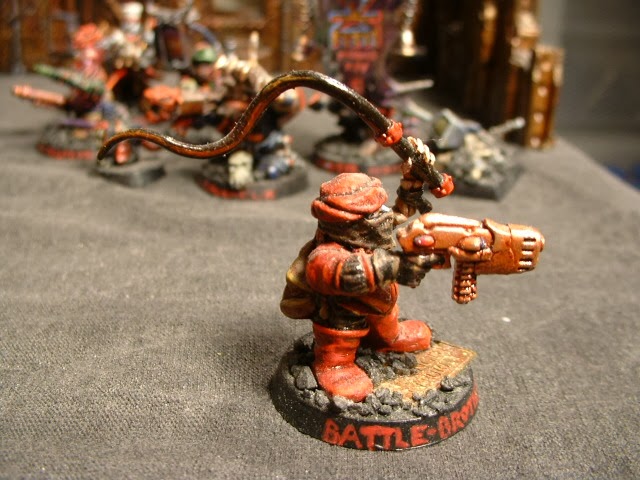 Wrong Adventurer-Turned-Special Character
Time for Bed.
Posted by Hungry Ghosts at 11:30 AM 1 comment: