Now Hungry Ghosts rarely pays attention to the current comings and goings in the various armies of Warhammer 40K or Fantasy Battle. OK, he views them as crazy expensive sprues of juicy bits for conversions when they get broken down and tossed on eBay.

And the occasional writing in The Book of Grudges. Lamenting the utter destruction of Orky Kultcha, regardless of past enmity. We miss Khorne Stormboys. Mad Boyz were always good for a laugh, though snarrffulling bubbly beer may bring a few tears to the eyes.
Groaning about the Beastmen turning from wild hordes of insane convolutions of animal, vegetable, mineral, and man to domesticated livestock with pointy sticks.
Mocking the grotesque proportions of the Dwarfs and Ratlings...

...and pointing out how on every element of monstrosity – spiky bits, giant guns, huge body parts - the Daemons of Chaos are outdone by Tyranid, Goblins, Dark Eldar, Necrons...
But now things have gone too far. Coming suspiciously close to the revelation of the Legioss Moriad XIV Experimental Aeronautics Agency, Games Workshop has released a new WFB Dwarfs Army Book and several new models.

Amongst the Mighty Lords of Mighty Prices comes the new Dwarf Gyrocopbopter or whatever it's called when you don't want to say something is a helicopter, 'cause you can't trademark helicopter. Take a looksee: http://tinyurl.com/gyrocopbopper

So COMPLAINT THE FIRST: Notice that you can make a Gyrocopter or a Gyrobomber out of the set. If you go through the pictures and/or text ("The Gyrocopter is a small yet nimble war machine." and "Kept afloat by two rotor arrays and a dirigible balloon, the Gyrobomber is part Gyrocopter and part airship.")

You will see that the Gyrobomber is about twice as big as the Gyrocopter.

Once upon a time, there was a game company that would notice that the Bomber is about twice as big as the Copter. That company wouldn't just sell one set that leaves the Dwarf enthusiast with a relatively small Gyrocopter, a pile of bits, and eyes watering with tears for the same price as a big old Gyrobomber, not much bits left over, and happy happy joy joy about their monstrous flying dragon-killer.

Instead, you blow $45 on a model that uses half the stuff in the box. Merry Beermass, beardlings!

COMPLAINT THE SECOND: Gaze upon the text accompanying these amazing flying machines.

“Gyrocopters and Gyrobombers represent the best of Dwarf engineering. Designed by the Engineers Guild and inspired by combining dragon and drilling machine the original Gyrocopter design took centuries to gain acceptance.”

There seems to be some words or maybe punctuation left out of that blurb, but we get the essence: these machines are the best, and the best means expensive, the best means prestige, the best means Living Ancestors tell you before you board the craft: “take care of this fucker or we'll have your balls if you survive the crash-landing.” Right? Right.

But instead of this proper care and handling of an expensive experimental awesomeness that took totally a lot of time to get permission to create, we are told that these machines are:

“Piloted by beardlings (still growing into their whiskers!) these fearsome war machines are regularly seen bombing the battlefield with wanton abandon.”

Hungry Ghosts has no problem with using fearsome war machines, or bombing the battlefield with wanton abandon.

Hungry Ghosts does have a problem with experimental war machines and weaponry... a problem with making too many of them. The fact is that the Dark Mechs of the Legioss Moriad have a free pass to screw around with any manner of machine, be it meat or metal, or more likely both. 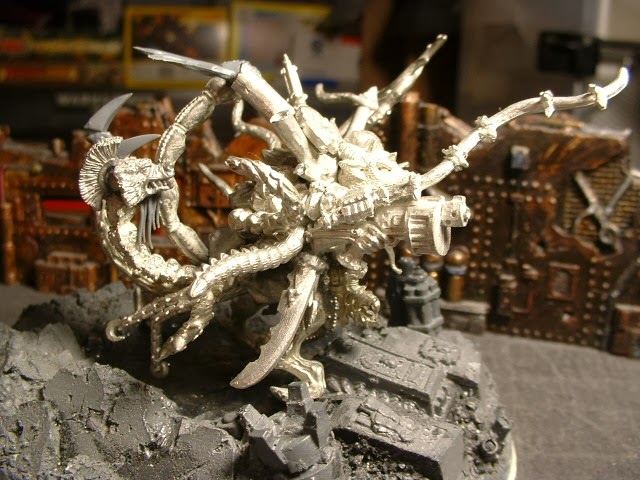 Most recently, there's been uncontrollable urges to develop mobile weapon platforms that eliminate the need for a team of two to handle a heavy weapon. Like so: 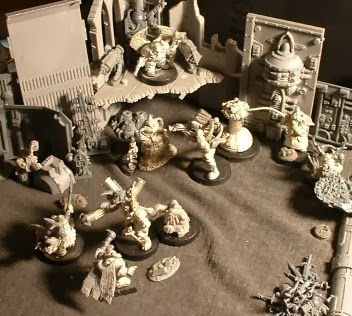 Hungry Ghosts Mechs are busy melding these Necromunda Pit Slaves (Pit Slave 4 and 5, fresh from the Underhive!) with the type of weaponry normally seen mounted on wheels or tracks. In the interests of controlling the beasts and gathering lots of datas, our Pit Slaves have implanted computronic displays, info-jacks, and cybertubes.

These here Pit Slaves were purchased for use as the other three: vehicular violence victims. 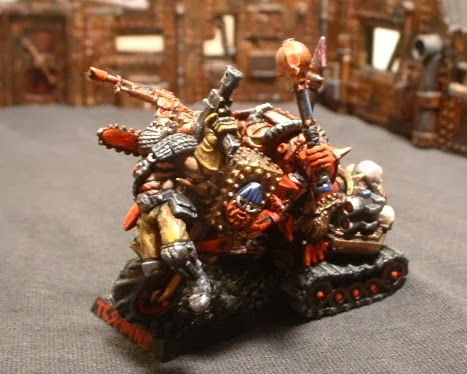 But they are honking huge comparatively, and well armed... except for the arm cut off... or maybe now they're even more well armed … stupid pun confusion ….

The Dark Mechs of Moriad have a Dark Fascination with taming and controlling the ancient enemy of the Dwarf race, the dreaded Rust Monster. Here we see one such experiment, obviously going quite well. 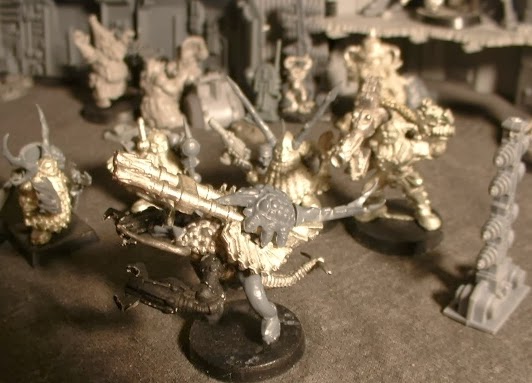 Not only does our Rust Monster have twin-linked Las Cannons mounted upon its back, extra firepower has been pumped up by replacing the forelegs with Eldar Webspinners fresh from the exarch. All of this weaponry did require installing some additional brain power to the insect.* But care was taken to ensure the minimum was added, just a few little neuro-nubbins.

Back to the beardlings. Yes, beardlings like to get into all sorts of shenanigans. If your beardlings insist on flying, we know what to give them. 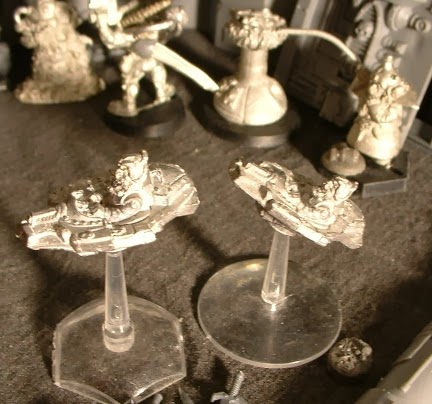 Put-Put Away Young Eagle, Put-Put through the Clouds in your little Cloud-Cars!

And of course they'll want to play with some dead bodies, or semi-dead bodies, try out some cyborgization or reanimation. So you let them play in here: 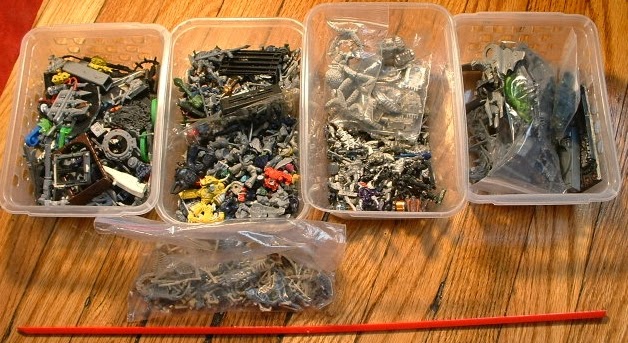 Not super expensive flying machines! Not even the pile of bits left over when you make the Gyrocopter instead of the Bomber!

*Moriad Mechanicii have determined that the Rust Monster was possibly the first Tyranoid entity to penetrate the Great Bearded Galaxy**, long before the Catachan Devil or the Ambull.
**You didn't think we'd call it the Milky Way, did you?
Posted by Hungry Ghosts at 12:10 PM 3 comments: