Chaos Commissars for Khorne: Your Living Ancestors Have a Dark Secret 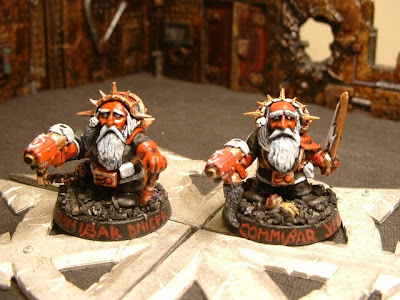 Today the Commissars for the Hungry Ghosts make their appearance; Commissar Ob Dniepr on the left, Commissar Amur Yenesei on the right. As the Hungry Ghosts are Undead, of the Revenant Berzerker strain, the notion of Living Ancestors was philosophically challenging. But Christmas is coming up, and the urge to paint some Squats like Nazi Santas was overwhelming.

I decided to make these Commissars look very similar, in contrast to most of the army, since they will need to be noticeable in the field in their assigned squads. I also went with a starker color scheme of the Black-Red-Metal typical of Khorne, with white to indicate their age and authority. In Hungry Ghosts fluff, their red skin is a gift from Khorne for their long and glorious service, making them look more like His daemons. They also have Skull-headed ornaments attached to their right ears, just like those of famous ally-slayer Kharn the Betrayer. Exactly like them. 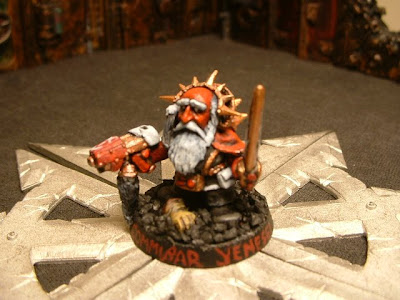 Here is a closer view at Cmsr Yenesei. Both Commissars were given Plasma Pistol, the version from the 40k 2nd edition Chaos Marines Close Combat Weapons sprue. The Plasma Pistols have been painted to contrast with the heads of the Squats: they are white at the top/back and red at the bottom/front. Both pistols have Space Wolf Tails attached as trophies (and to fill some of the negative space these minis have).

To emphasize his authority, Commissar Yenesei has a severed Squat hand laying at his feet, painted to blend with Yenesei's metal areas. 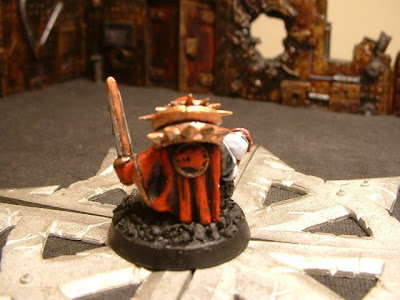 Both Living Ancestors were sculpted with large metal ring collars to indicate their high status. These were made bigger and spikier, in accordance with Khorne's commands. The thicker spiked ridge is from the 40K Ork Boyz sprue, while the more delicate one is from the Space Marine Commander sprue (with the middle part cut out).

To go along with all the other spikes and curved parts of this mini, the Commissars were given a symbol a wolf on their capes, from the WFB Knights of the White Wolf sprue. The Living Ancestor minis were not sculpted with interesting backs, so the Wolf Symbols and the Spiked Collars work well to add needed detail consistent with their Chaotic allegiance. These Hungry Ghosts with the Wolf symbols are also designed to cause Duran Duran to sap the opponent's valuable attentional resources. Here is Commissar Dniepr from his left side. To distinguish him from Yenesei, Cmsr Dniepr's thin spikes are positioned above the head, more like a crown than a collar. 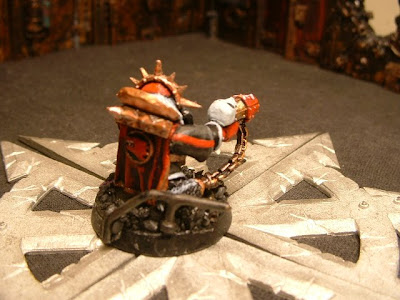 Commissar Dniepr also has his Wolf Tail at the trailing end of a chain, this time a metal bit, part of the Chains from the first version Dark Eldar Jetbike. Overall, the Commissars are accessorized to display their ferocious canine aspects.

This Commissar holds the Power Stick, so long thin cylindrical forms were needed for his accessories. Along with the chain, a broken piece of Imperial Tank was used to counterbalance the Power Stick; tilting forward on the right while the Stick tilts backward on the left. (Yenesei has a zig-zag appearance to match his Power Sword.)

It was fun to use such as stark color range with these fellows. And while GW's Dwarfs have never been known for their legs, these Commissars look like floating heads with their bulky beard covered bellies and giant collars, while their legs fade into the black landscape.

It's Fluff Season in Illinois!
http://tiny.cc/nus88
Posted by Hungry Ghosts at 7:00 PM 2 comments: 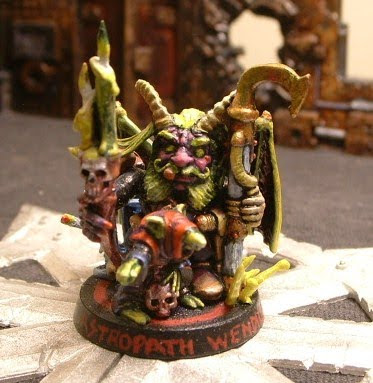 The Astropath position offered another opportunity to break from the Colors of Khorne. This time, Tzeentch has lent the ambassador to the Hungry Ghosts, High Astropath Arc Wendigo, Master of Obfuscation, Occultism, and Obscurity. While I've used a bit of an exaggerated comic book painting style with the Hungry Ghosts in general, I used the power of Tzeentch here to go further and break out the old funky purples, pinks, and yellows from the 1990s. Now our Astropath glows like he's constantly bathed in ultraviolet light.

This Squat Pirate suffers from the Giant Head Syndrome that plagues GW Dwarfs frequently, and comes with a giant, curved, what-the-hell-is-this-for, hooked cyberstaff. The only thing to do was to make the rest of him fit the mutations and equipment he arrived with.

First was to make his head More Giant by adding a set of Horns and Hair from the WFB Beastmen sprues, with greenstuff to fill in the gaps. Next, Wendigo recieved a second what-the- hell-is-it staff, jutting straight ahead in his right hand (the top half is from the Empire Wizards sprue, the bottom half is a Wood Elf bow, the arm is Zombie). The Wizard bit also provided more fire for a two-of-everything theme for the Astropath, with two candles and a two horned skull. The skull also provides a second head looking forward. But where the Eyes of the Astropath Glow with the Fires of the Warp, the skull offers only darkness. 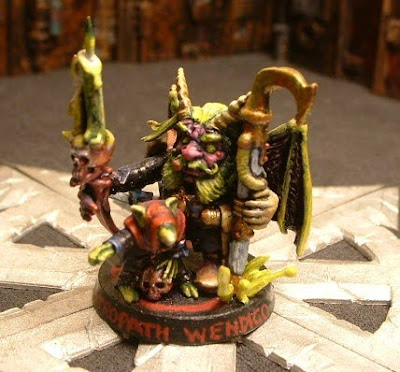 To contrast with the glowing green and yellow Magick Flaymes on the Astropath's right staff, I added a some small brightly colored bits to give the appearance that his hook staff is drawing splashes of magic out of the ground. Similarly, the metal upper bits of the hook staff have been painted with a gold/bronze tone which is used on the bottom half of the candle staff. A similar non-metallic yellow/tan was used on Wendigo's extremities and his prominent gun. To keep the emphasis on Wendigo's interesting parts, the bulk of his body was painted black. It was a stupid looking puffy jumpsuit and it deserved to be hidden. 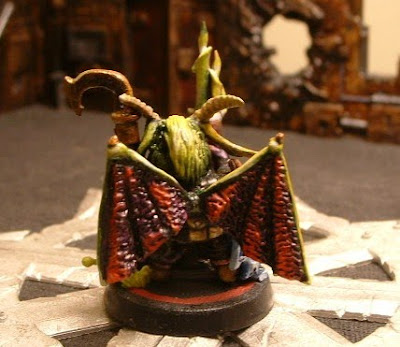 This Astropath's next attention grabbing mutation is his wings. The edges of the wings have been painted to match the glowing hair and magic flames, while I have attempted to paint the inner portions to look like they are refracting light and creating an iridescent shine. It's always interesting to attempt to make the solid appear less so. The wings are an old one-piece version from the Dark Elves Harpies. 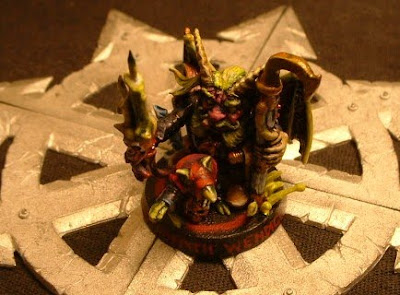 By this point, the Astropath has become one of those conversions that fully utilize all of the space on the base. To fill out the front, Wendigo is joined by his familiar Minigo, a little Rat King from the Skaven Rat Ogres sprues. Minigo has been painted with the same color scheme as his master, and his small sharp body parts add to the many thin bright yellow/green elements already present. To balance that brightness a bit, and to add some complexity to the appearance of the base itself, I gave him red Magic Circle a bit in from the edge, to assist with his astropathing and stuff.

This Astropath is a character who will definitely stand out on the battlefield, but at the same time his shape is highly fragmented and complex. I think that's how Tzeentch would want it. 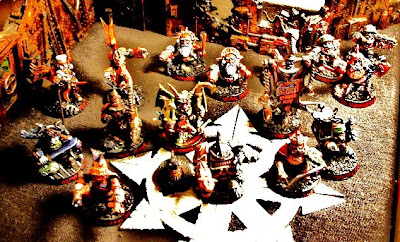 It has been a bit longer than planned since we last saw a new Chaos Squat from the Hungry Ghosts army. But your author is not just joking about being a cyborg, and part of his implanted medical device attempted to escape its fleshy lodgings for the great outdoors. Thus an emergency surgical procedure was required to keep it inside. But now we can return to the Squats. 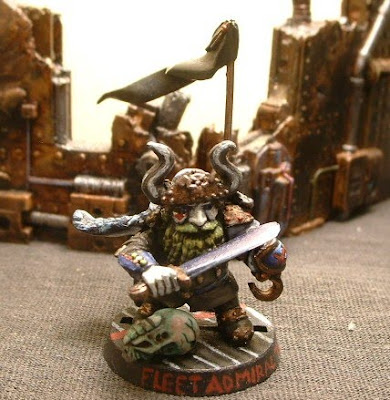 Admiral Wendigo Tunnler is based on one of the 1990 Squat Pirates that did not make it into any of the Citadel Catalogs or White Dwarfs. From his claw hand and horned helmet, this mini was an obvious candidate for the Officer of the Fleet slot.

To give the Hungry Ghosts a bit more variety than they already have (as if they needed it, with Snots dressed as Sharks and Gnoblar-Daemonette crossbreeds trailing them) Admiral Tunnler has been painted as a follower of Chaos Undivided. In our Warhammer Universe, this means lots of grey-scale colors and metallics, as too much of any color would tip the balance toward one of the Great Ruinous Powers. But Admiral Tunnler knows that it is unwise to sail the space waves for long without a nod to those Great Ruinous Powers. Thus the greenish beard for Nurgle, a blue sword blade and other accents to placate Tzeentch, and red studs and tattoos for Khorne. The pastel pink and green tone of the Tyranid skull shows how highly Slaanesh is valued by the Hungry Ghosts. 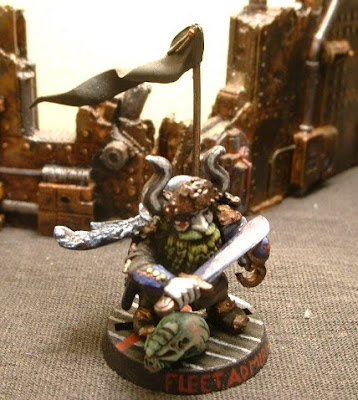 There was not much converting needed to finish the Admiral, but Tunnler comes from the days of less-dynamic more-planer casting. So the bits selected to finish him were bits that would give him a more dynamic 3-dimensional look. His right arm comes from a WFB Empire Militia sprue, with a nice thick-bladed pirate cutlass. To make it look more sci-fi, the cuff of the arm was increased in size and painted as if it were a small computer (ask not how he presses those buttons with his Claw).

Those of you who have been following the Hungry Ghosts for a while can likely guess that Tunnler's sword arm was not selected just for the nice cutlass. It was also the first step in creating diagonal lines to further draw attention away from the relative flatness of the mini. The angle of the sword matches the angle of the long axis of the Nid skull. In contrast, the lines on the bases are aligned with his right forearm, and are positioned under the bells of his beard with the gaps between the lines about the same as the distance between the bells. 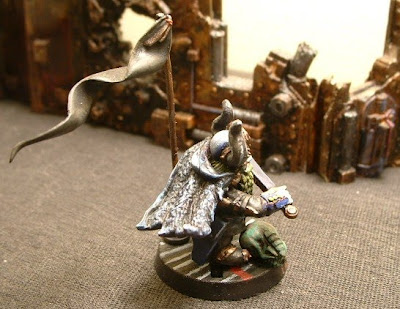 Now that Admiral Tunnler has a front profile that draws the eye from the right front to left back, the bits added to his back side will do the opposite. Adm. Tunnler is given a nice windswept appearance with his cape and flag, with wind blowing from the left front to right back. The furry cape is from the Chaos Marauders sprue, the pole is an IG Tank antenna, and the flag is probably from some Empire cavalry, but I'm not sure and pain-levels are too high for a thorough search to identify it. Tunnler also has a sidearm from a Cadian sprue added to his belt. 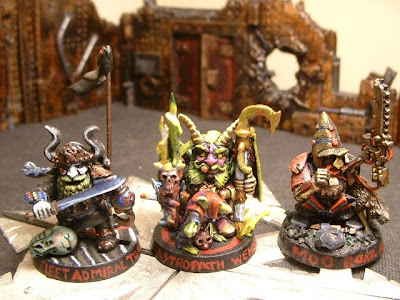 That's all for Admiral Tunnler, up next will be the Hungry Ghosts Astropath, finishing the Regimental Advisors positions.
Posted by Hungry Ghosts at 9:00 AM No comments: