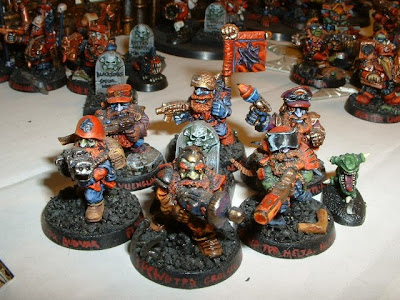 Our third squadron from The Rotted Hearth Platoon is the Black Stars Special Weapons Squadron, named for the symbol on their banner. These troopers are all Bob Olley designs, half from the Iron Claw series released in White Dwarf 100 and half from the Squats Warriors series released in White Dwarf 108. Like many of the Hungry Ghosts squads, they've attracted a mascot, the large mouth green critter known as either the Jaw Chaos Familiar or the Jaw Squig. Since it's green and on a GorkaMorka base, let's go with Squig. Orkses iz evrywere. 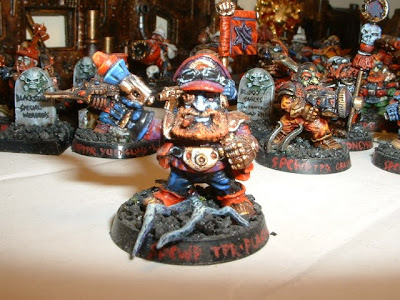 First is the Plasma Gunner, Trooper Donder Spaten. He is from the WD 108 series and has enough cybernetic bits and other details to make me happy without converting him, despite the age of the mini. The branch on his base is from the WFB Wood Elves Dryads sprues. The Dryads sprues are a nice source of bits for both Chaos and Eldar 40K armies. 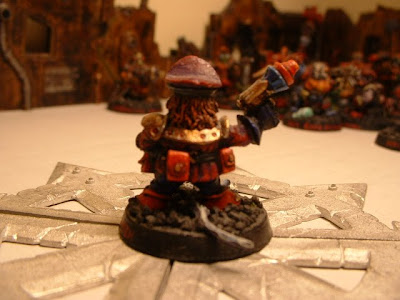 View of Plasma Trooper Spaten from the back. This mini is known as Hand Flamer in the 1991 Blue Citadel Catalog. 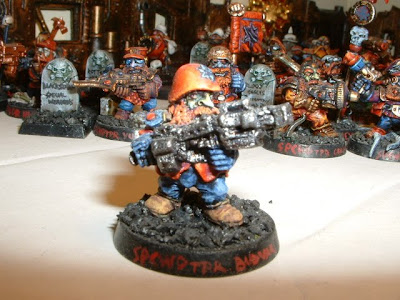 Special Weapons Trooper Pilz Budvar with Flamer. Another of the Iron Claw Squats (18) with a mysterious weapon unknown to the small-minded Imperium. I might need to go back and paint it in a color more similar to the other special weapons in the squad. 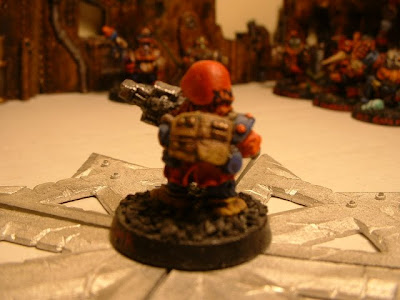 Flamer Trooper Budvar as viewed from behind, backpack full of gummi-bears. 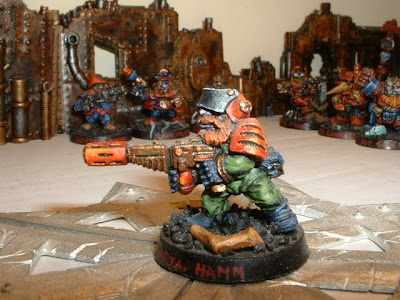 Third Assault Weapon Specialist Trooper Hondo Hamm, with Meltagun, from the WD 108 series. His gun is still recognizable today as an early Melta (Melta 2 in the 1991 Blue Citadel Catalog). I can't remember whose rotting body part that is on the base, but it was painted to accentuate his brass-colored weapon. 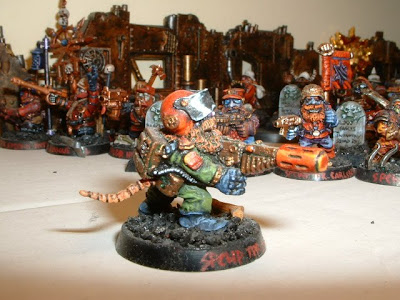 Melta Trooper Hamm from the other side. He already has a long horizontal profile for a Squat, and I added to the long wavy lie created by the underside of the gun barrel, his arm, and backpack wire by giving him a small Chaos mutation. It's the tail from one of the skeletal horses that have been available forever for Fantasy Battle. Like the rotting limb, it was also painted to accentuate the brass equipment. 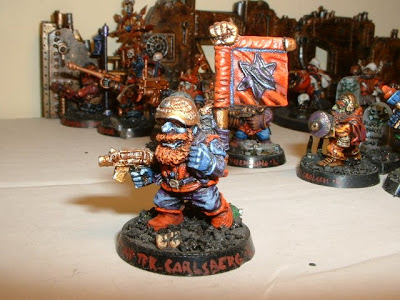 The squad's banner bearer is Corporal Ren Carlsberg, the Standard Bearer (5) from the Iron Claw Squats series. He is one of the Iron Claws that made it in blister packs to the US, packaged with number 1. His gun looks mostly like a bolt pistol, but since this is the special weapons squad, I've used several troopers with weird old weapons and count them as Lasguns. 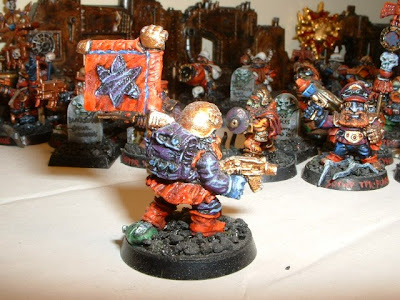 The other side of Corporal Carlsberg. He is stomping on a Cadian canteen. I tried to put a wee bit of the Spider-Man in the coloring of his clothing. 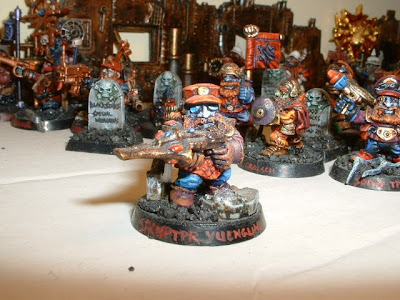 The 5th member of the Black Stars is Trooper "Big J" Yuengling. He done kilt him an Eldar and kept the old-style Shuriken Catapult. From the WD 108 series and continued into the 1991 Blue Catalog as Shuriken Catapult. One of the Bob Olley Squats that have the more standardized Imperial Army Flak Armor look. 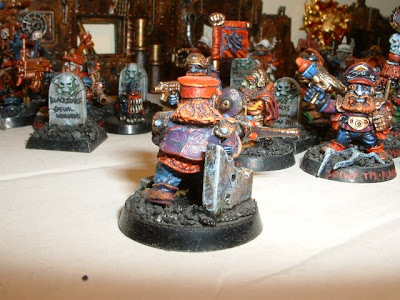 Trooper Yuengling from behind. He may be Imperial Army in the front, but that hair says party in the back. I tried to give him a purplish shimmery jacket and gloves, more gear taken from the Eldar who supplied the Catapult. I've taken advantage of his striding pose by positioning him between the cracked and bullet-scarred pieces of a tombstone, one of the plastic Undead accessory bits. 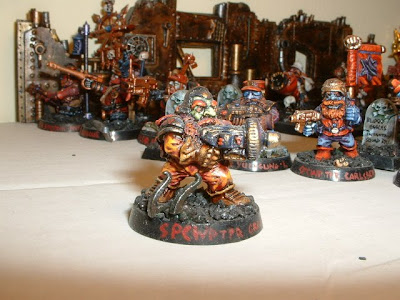 The last Black Star is Trooper Arkham Grolsch, number 10 from the 1988 Iron Claw Squats series. He is also one of at least 4 who made it to the US in blister packs, along with number 17. Another funky old gun that now counts as a regular old Lasgun. I added some curved metal fence prongs to the base, to go with the curved appearance of his armor and gun. They are pieces of Dark Elf Crossbow. 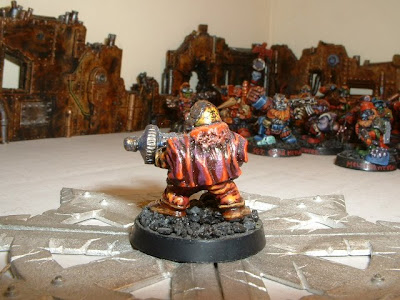 Trooper Grolsch on the other side, with fancy purple cape. I tried to select miniatures for this squad that were a bit more ornate than the average Trooper, and to paint them with glossy ornateness as well. They know they're the Special Weapons Squad and are making sure the rest of the platoon knows it. 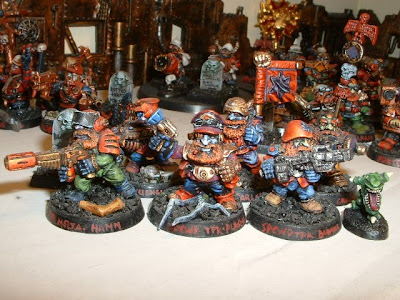 One more look at the Black Stars Special Weapons Squadron.
Posted by Hungry Ghosts at 11:58 PM