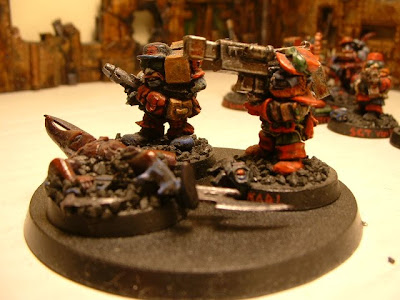 Here is the Heavy Weapon team from The Underdeepers squad, Gunner Lyle Karl and Loader Hondo Grigg. They are from the RT303 Space Dwarfs Heavy Weapons Crews released in February 1988. Their dead Dark Eldar is from the 40K 3rd edition set released a decade later. 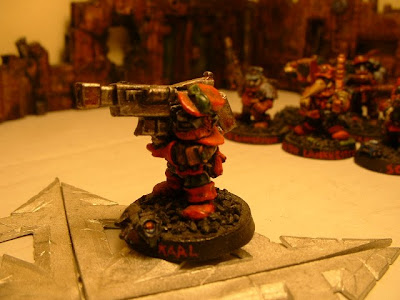 Gunner Karl is using the first version of the Heavy Bolter released for 40K, which did not last long before being replaced by the larger version used by Gunner Keif. Since it no longer looks like a Bolter, is counts as an Autocannon. That is a partially destroyed Necron Scarab clinging to the side of the base. 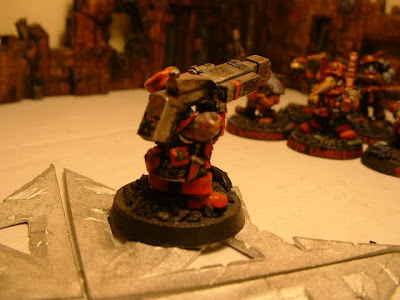 Gunner Karl and his Autocannon from the other side. He is pretty much Gunner Keif with a different head. The second version of the Heavy Bolter that Keif is using is much better than this "let's stick some rectangles together" weapon Karl has. 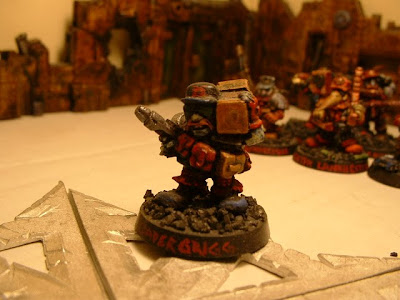 Loader Hondo Grigg is the second member of the Autocannon team, though he seems to be carrying ammunition for a variety of weapons. He also has one of those tiny early Rogue Trader Plasma Pistols that is being counted as his las weapon instead. 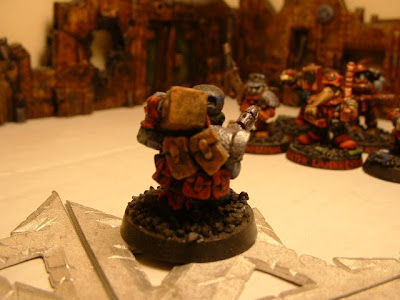 Loader Grigg turned around, carrying even more ammo on his back. It's a good thing he no longer officially has a Plasma Pistol with that mountain of ammo he is hauling about, could make quite the explosion with the wrong dice roll. 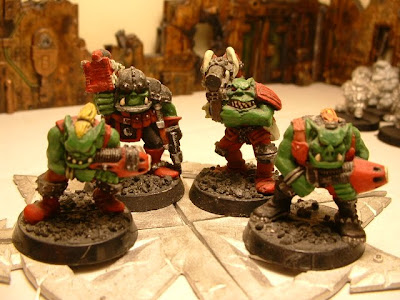 Bonus picture for those who made it all the way to the bottom: A quattro of Rogue Trader Ork Boyz with Heavy Weapons. From the Realm of Chaos days, when Orkses and Stunties could get along alright as long as they all followed the same flavor of Chaos. Orks want the teef, Squats want the gold, they all want to explode tanks. They all also think Blood Thirsters are right mean killing machines who should be followed where ever they may lead.
Posted by Hungry Ghosts at 1:26 AM