Your Chaos Scribe is really feeling the Nurgle today; ok, this whole week. So this post will be short. That was not a dwarf pun. In the grim darkness of the future, there are no puns: It is the Space Puns that were all eaten by Tyranids, not the Space Dwarfs. On the other hand, the Pigs in Space were all eaten by the Squats. 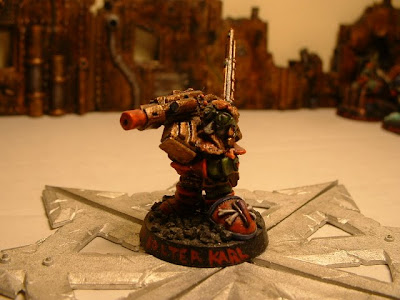 The Blood Eagles Heavy Bolter gunner is from the RT303 Space Dwarfs Heavy Weapons series. Originally known only as Gunner Keif, decades of research have revealed his first name to be Nermal. Also known as Gunner 1, he is probably one of the most common Squats out there. Gunner Keif is wielding a very large Rogue Trader era Heavy Bolter, anti-grav suspensors included. Since the best thing to do with a very large gun is to embiggen it, Keif's heavy bolter has been made more impressive with the addition of a long antenna from a Battlefleet Gothic Imperial battleship. 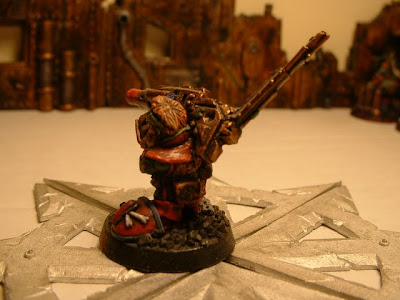 Another view of Gunner Keif, displaying the full grandeur of his antenna. One might suggest he is over-compensating for an inadequacy closer to his belt, but one might also not enjoy the heavy bolter fire offered as a riposte.

As we can see from the base rubble, the bloodthirst of the Hungry Ghosts of Khorne exceeds even that of the Blood Angels. All that remains of the Emperor's lackey is a lone shoulder pad, discarded like a snail's shell after the meat has been sucked out. 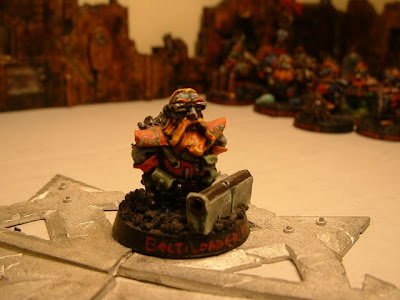 Heavy Bolter duties are shared with Loader Darth Khyrk, also from the RT303 series. Khyrk's skin is especially fetid, even for a Hungry Ghost. He was swallowed by a Tyranid, but ate his way out from the inside. I've added a drippy pipe section to the base, hollowing out part of a building wall section from the recent Imperial Cities of Death range. 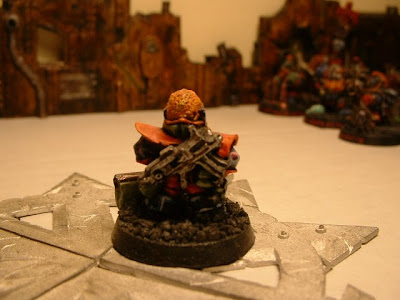 Darth Khyrk from the back, carrying a Bolter no longer allowed under the current rules. Removing it would have been annoyingly difficult, so let's just say it's an unloaded souvenir from the Blood Angel whose shoulder pad lies on Gunner Karl's base. 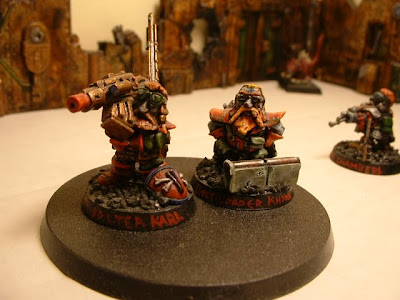 Gunner Keif and Loader Khyrk together and ready to blast Greenskins and Point-Ears. 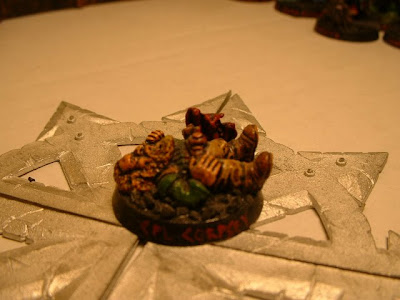 Let's take a moment to introduce the unofficial mascot for the Blood Eagles, Corporal Corpsey, He is number 16 from the Iron Claw Squats series. A wee winged demon pecks at his remains. I think he may be part of the C22 Wizard's Familiars range, or maybe the early 80s F series. I've had him since I was a mere Beardling, and can't remember exactly where he came from. 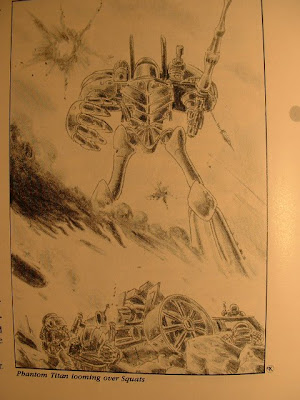 Finally, for historical curiosity value, here is the first picture of the Squats in Epic scale 40K, from White Dwarf 110. It is obvious Eldar propaganda, as the Thudd Gun is facing away from the Titan and toward our bearded friends. Even Squats who have been blinded by the light of the Lich on the Golden Throne know enough to point their guns at the Xenos.

But the pointy-eared artsy flower-farmers have always been known for their seductive lies: None of those keebish cookies are made in tree-factories, not a single one. Just another lie to lure hungry humans into the forest to be shredded by dryads.
Posted by Hungry Ghosts at 2:27 AM