From Wombles to World Eaters: Another Rogue Trader Interlude 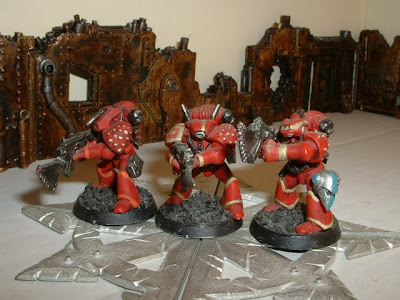 Here is a trio of RTB01 Mark 6 plastic Wombles Space Marines turned into World Eaters of Khorne. They were another part of my Rogue Trader Chaos army assembled and painted in my beardling years. As we can see, my fetish for using pieces of obscure Dark Horse Miniatures to convert my Citadel minis started many moons ago. These World Eaters have been given a nice Cyclops look using the heads from the Robotech Veritech Battloid miniatures. I'm not sure what makes the Veritech head designs so appealing, but I have been enjoying them since Robotech first hit WPIX-11 at 630 am in 1985. As for many, Robotech changed my life as the first cartoon where important characters, or anyone at all, actually died. Around the same time, Jetfire was unleashed into the world as the most awesomely transformable of the Transformers.

Seems like the Veritech Battloid Heads are still inspiring Warhammer 40K designers and aficionados: Here is a peak at the Heads of the new Forge World Tau Battlesuits. 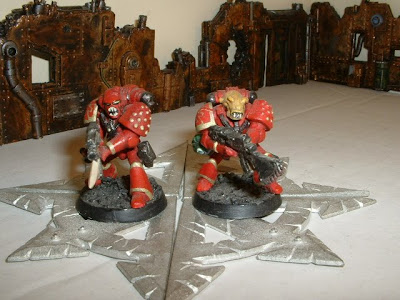 Two more World Eaters with simple head conversions. The mutant on the right has the head of an early Tyranid Hunter-Slayer, while the other had simply had his beak chopped off and a sharp-toothed mouth painted on it.

The RTB01 Space Marines were the best of the Rogue Trader plastic minis by far, and still look good today. For the time, the sprues had a large number and variety of accessory bits included, and the body pieces offered excellent possibilities for firing poses. The armor is less ornate than later editions, but I think it creates an effective streamlined appearance rather than a primitive one. And they are so much better than those awful boring 40K 2nd Edition Smurfs that replaced them.

The mid 1990s gave us the worst 40K figures while the GW designers pushed out minor game after game, only to kill them all to focus energies on making better minis for 40K 3rd Ed and WFB 6th Ed. Separate torsos and legs are very useful for allowing the player to give variety to his troops, and GW seems to be forgetting this lately in their quest to add as many details as possible to show the new power of plastic casting. 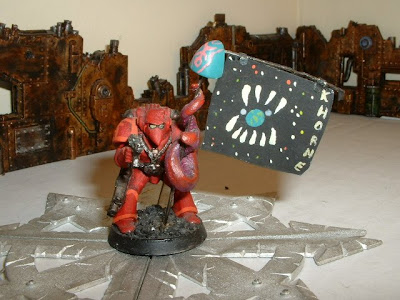 One more old World Eater, this one a standard bearer with an Emperors Children shoulder pad as a trophy. My banner painting skills were not especially impressive and is merely some stiff paper, while the standard pole is a paper clip. In the olden days, converting minis frequently meant going MacGyver with household products and their packaging. But I am still pleased with his tentacles, one of my first attempts to sculpt bits with epoxy resin. 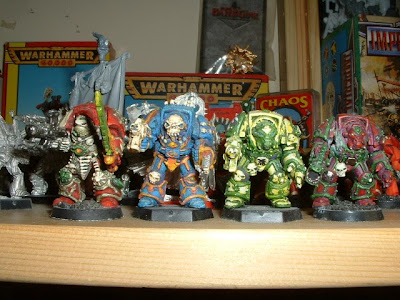 Finally, my set of the Rogue Trader series of Chaos Terminators, all 4 variants. They were another set of nicely done early Chaos Marines, and I still prefer them to the spikey humpbacked elephants of the 1997 series and the current plastic Terminators. And $10 per plastic figure? Is the shipping cost from the Eye of Terror to blame for this monstrosity?
Posted by Hungry Ghosts at 2:45 AM