The last Thunder Chief Rough Rider is one of my favorites, the six-limbed cyber-squat Otzo "Spinne" Sluitdiep. Below is the motorcycle in unassembled planning stage. 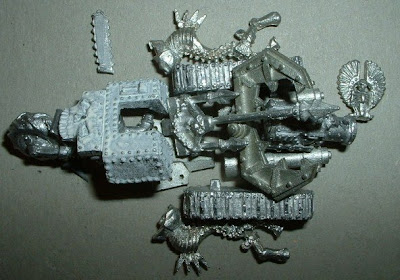 Spinne's motorcycle will primarily use Ork parts, moreso than the last two cycles, along with some Chaos and Undead pieces. There will also be a bunch of plastic bits added to this as the bike comes together and their need becomes apparent. 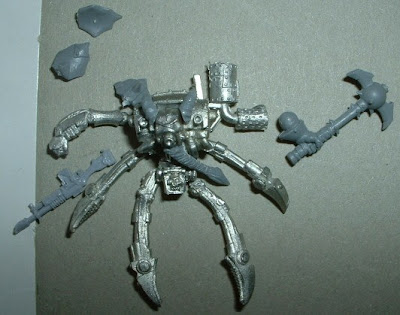 Our rider, Spinne, is a much more complicated conversion than the other riders, and will be assembled after the bike to make sure all his limbs get positioned correctly. Spinne is made from the body of an Epic Imperial Knight Paladin, the Epic Knights again proving useful conversion material for the Chaos Squats. The plaited beard of a Beastman, along with Beastman horns will make the body appropriately Chaos Squat-like.

Spinne's legs and driving arms come from the Chaos Dreadnought Power Scourge, with the longer spines going to the legs. The diameter of the scourge spines fits nicely with the nubs left from removing the Paladin legs, and the driving arms fit into the space between the sculpted cables on the body and the fighting arm nubs.

A Necron Destroyer Lord arm is used to fire a Krieg Lasgun from Forge World. On the left, a Gorkamorka Blowtorch will be cut up and used for the upper arm, along with the Explosive Warhammer-wielding forearm of a Chaos Warrior. Chaos Warrior armor bits and greenstuff will attach and complete the arms, and add necessary spikes. 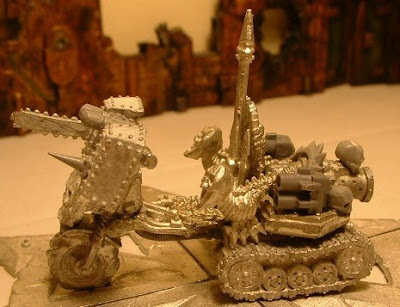 Here is the motorcycle, assembled with some new plastic bits. The front assembly for the cycle uses the Ork Wartrak Front Wheel and Hop-Splat Gun, as planned. It has been made more threatening with a large spike from one of the Chaos sprues and a Chainsword Blade, which originated on the Squat Champion with the lizard skin in the Blood Eagles Squadron. Since the rider is not yet constructed, the connection between the front and rear sections of the cycle is visible, the upper part of the Chaos Dread Power Scourge that was used for the rider's arms and legs. A plastic cable from an Imperial sprue is added below, providing addition detail but not much structural support. 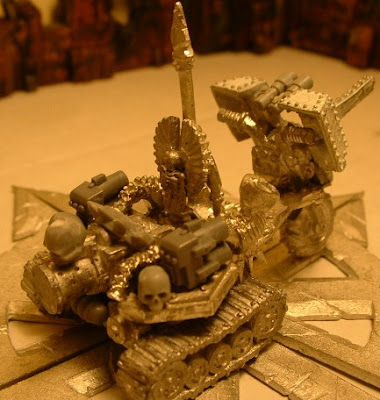 We will shove that aside and address the many skulls that went into this loving creation of the Chaos Dwarf Adeptus Mechanici. As we can see, several skulls of the false emperor's lapdogs decorate the cycle, including the Winged Skeleton bit, taken from a 2000s Space Marine Chaplain's Crozius. It is bound to the Spiked Banner Poles of the Chaos Dreadnought, which will provide a seatback only a robotic sadist could truly appreciate.

The Hydraulics bit from the Space Marine Vindicator provides the core of the back end, with the Ork Wartraks attached. Part of the Gorkamorka Big Grabba is attached on top of the Hydraulics, providing a space to insert an engine. The engine core itself is made from some Ork weapon, but I haven't figured out which one. To the sides are some Skeletal Exhaust Pipes, made from some 1990s Mounted Wight Command Musician bits with the arms chopped off. A split in half plastic Smoke Launcher adds some more mechanical bits of unspecified function, and some spikey Ork armor for the usual function. So 8 Skulls, counting the metal skulls on the front armor and the driver. Coincidence? Perhaps. 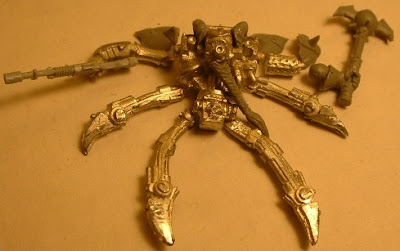 Now Spinne has come along a bit further, with his arms and armor laid out and plastic bits glued on. He will need to be assembled with greenstuff in position on the cycle. But the hour grows late here by Lake Michigan, so the fully assembled Spinne Sluitdiep will be revealed tomorrow. We will conclude with some theories as to why our six-limbed Cyber-Squat is named Spinne when we know die Spinne has eight. 1. The horns count as limbs. 2. The beard and the, erm, part that Khorne doesn't like to talk about, count as limbs. 3. Too Chaotic to count correctly. 4. Peter-Parker envy. 5. Mere puffery. 6. Tyranids ate them.

Here is a concluding picture of some Thunder Chiefs, who are parading behind the Burnt Scorpions Storm Troopers, who are gloating over the corpse of a Dark Eldar Warrior, whose scent is attracting the mutant space rats, who don't know what a run-on sentence is. 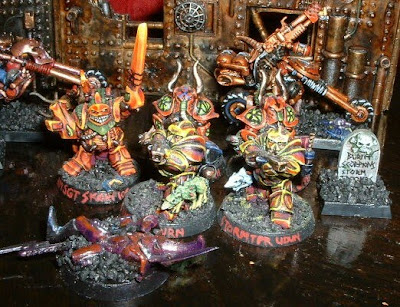 Posted by Hungry Ghosts at 1:34 AM