Bitz to Bikes: 1000 Pieces of Madness

My current squad of Zombie Chaos Squat Motorcycle Rough Riders, the Thunder Chiefs, numbers only 7. Which leaves 3 more needed to fill up the squad. But I don't like using the same pieces too many times, and I've used up all of the variants of Squat Bike Rider minis, and all of the Squat Bike bits except the not-allowed twin bolters. Thus, I have decided to create 3 new bikers using converted Squat infantry troopers and bits, bits, and more bits. Here we begin the descent into bits madness. (For those of you keeping track, there are a couple of Squat Bike Riders we haven't seen yet, but they are reserved for some Sentinels made from Heavy Trikes). 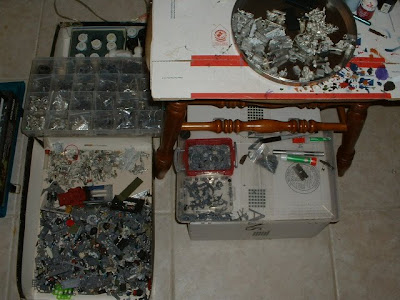 Here is our starting point, showing all the bits from which the bikers will be born. Bits from 1987, bits from 2010, bits from 40K, bits from Man-O-War, bits broken and bits new from the sprue. 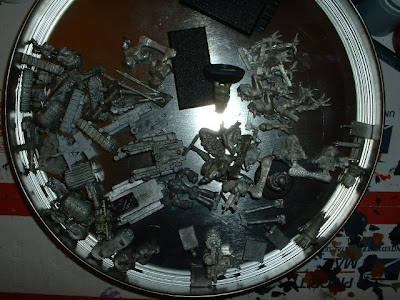 Here are the bits for our preliminary concepts for the bikes. I'm thinking of using the old Rogue Trader Ork Bikes with tracks, and have 3 variants up there. At this point, I'm also pondering the use of some Bob Olley Scrunts and Heresy Demons for some extra variation. Paranoia robot and Judge Dredd Lawmaster pieces too. 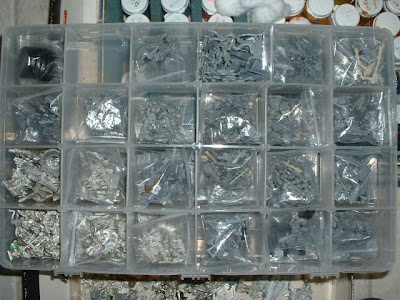 Here is my main bit farm for the bikes. This is where I keep all the Chaos, Dwarf, Undead, Skaven, Empire, IG, and any other bits that I find that may be good for converting my Chaos Squats and CSMs. These are the nice new bits specifically harvested from sprues later sold off or bought separately from kindly bits merchants. I am happy to have lived through the Golden Age of Citadel Bitz Service, and miss it more than Haagen-Dasz Carrot Cake ice cream. 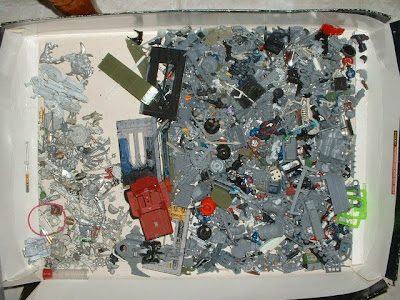 Last is the Bits Graveyard. Lots of broken or used bits of metal and plastic. Leftovers from buying lots of stuff on ebay that I actually wanted. It's great for my compulsion to use parts of bits, you can always find an extra arm or tentacle, something to make a plasma gun more ornate. That plasma gunner is going to melt himself before long, so he might as well do it with style. An excellent source of battlefield debris. Sometimes a home for small spiders (though they are GIANT compared to the poor little stray Epic troops in there). 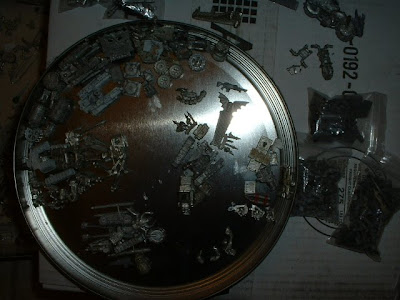 After several Band of Brothers episodes of sorting, my alchemical process has come up with 3 potential bike piles, and a pile of reject bits to the north. I've decided to use nearly all metal parts for the bikers, at least for the major parts, and have also knocked out anything not made by Citadel, since the rest of the army is mostly Citadel bits. 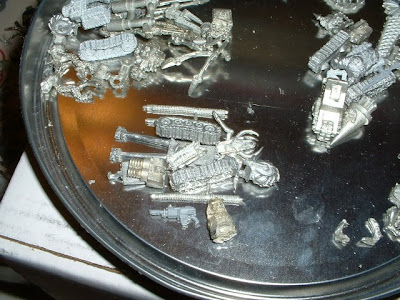 Biker no. 8 coming to life. Most of the Ork bike has gone away, except for the tracks and front wheel. To give the bike some bulk and structural support, Inquisitor scale tubes and an old Khorne Juggernaut banner pole will be used, and a Warmaster Skeleton Bone Thrower has been broken up, the from to serve as handlebars and the back will be part of the rider's seat. The rider is one of the Squat Bikers on foot, but he has lost them both, and at this point do not know where his legs and arms will come from. Spoiler Alert: Biker 8 will use those 2 dismembered Dark Eldar Warp Beasts legs on the right. 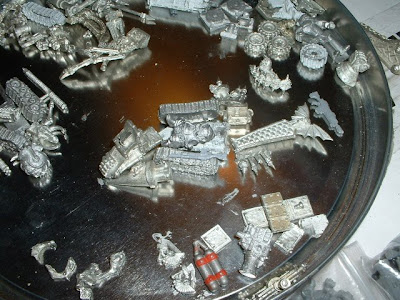 Biker no. 9, the Squat Pirate with wooden peg-leg. That leg will be replaced with something more technologically advanced. This Rough Rider will also use the Ork tracks, but the front wheel comes from the 2nd version of Blood Bowl Dwarf Deathroller. Dark Elf Lord Melkhior's seatback will be used for this biker, and some Chaos Terminator Trophy Spikes will add pointy-ness. For maximal pointy-ness, the head of one of the Warhammer Siege battering rams will be used. A SM Devastator backpack and other bits will be used to make some sort of motor. 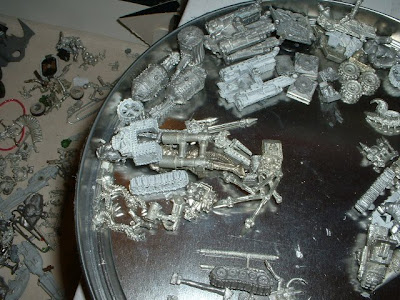 Final Biker number 10 continues the "Mr. Pointy and the Skulls" look established by the others. This bike will use the Ork tracks, and the shield bit from a Zzzap Gun will be placed over one of the Ork Bike front wheel & handlebars pieces. An old Vindicator Hydraulics metal bit will be used for both a seat back and engine bit, along with the multi-pronged spikey Banner Pole bit from the Chaos Dreadnought. I also may use the wheels of the Zzzap Gun for more wheeliness. I will use the metal Skeleton Musician arms to decorate and add structure to the bike.

For the rider, I'll be making a Robo-Squat, starting with the body of the metal version of the Epic Imperial Knight Paladin. I will be using plastic bits to be named later to give him the necessary horns and beard, and will be chopping up that Chaos Dreadnought Claw arm for his arms and legs. I might use the Necromunda Pit Slave Hammer Arm for him, but since the hammers are supposed to be a replacement to the exploding tip lance, well, it seems a bit wantonly self-destructive even for a Khorne worshipping Robo-Squat.

Next we will see what happens when these piles of bits start coming together. Which pieces will go? Which will stay? Which will win the fabulous weekend in Maui with their Daemonette of choice? That last one was a little joke. We all know Squats can't swim all the way to Maui.

It's been a while since we've had some bonus pictures of 1980s Chaos Mutation Madness, so here are a few pictures of converted Chaos Critters of the four-legged variety. 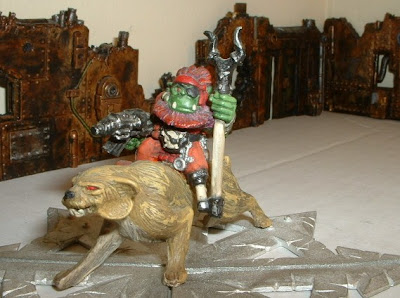 Rogue Trader era Ork Snake Biter Runtherd with Runt-Pole, armed with Bolter and riding a Chaos Bobcat. Yeah, Chaos Cougar is zippier, but they you have to explain it's a Khorne Cougar, not a Slaanesh Cougar. Also, this Cy-Boar substitute is a painted Max the Bobcat from the 1988 GI Joe Spearhead action figure (http://www.yojoe.com/action/88/spearhead.shtml). 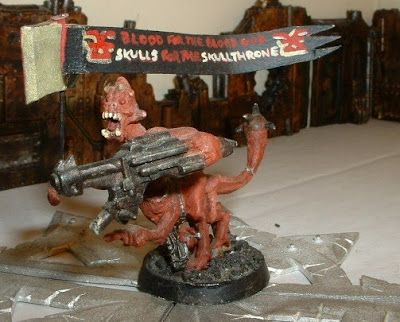 An early Chaos Champion conversion, starting with the body of one of the early Tyranids, the Hunter-Slayer, with the upper body of a Demon from the Grenadier Fantasy Lords 6006 boxed set. A very nice collection of demons indeed (http://www.cs.cmu.edu/~tpope/sol/grenadier/images/6006.jpg). He has been stripped of his club-wielding arm, since clubs are dumb, and replaced with an Imperial Guard Las-Cannon and a generous serving of epoxy. Our Monstrosity shows its devotion to Khorne with a banner made from part of a paperclip, some cardstock, one of the extra Cleaver blades from the ancient Warhammer Armies set, and a whole lot of imagination. There also used to be the head of a Guardsman on top, but he escaped. Little known fact, but a human can live up to 2 weeks without a body. The Champ's tail was also bulked up with a mace head from something somewhere. 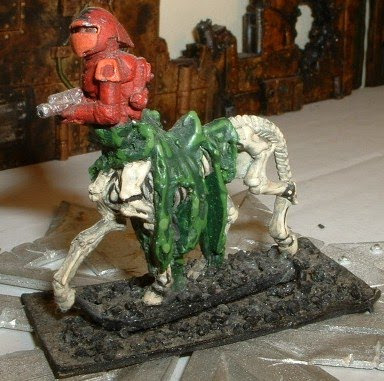 Our last entry in the Crazy Cavalry Contest is an Imperial Trooper from the 15mm Traveler miniatures series cut in half and put on the Horse's body from the 1980s Lord of the Rings series Dead Men of Dunharrow. I still have that Horse head, waiting for the right moment to use it...
Posted by Hungry Ghosts at 11:47 PM