2 More Thunder Chiefs Rough Riders; the Rest are Not Yet Painted

I wanted to wrap up the month of May by completing the set of postings covering all of my currently finished Hungry Ghosts troops, who make up a 1000 point army (and beat a 1000 pts of Chaos Marines in a trial run). The last two members are from the Thunder Chiefs Rough Riders Squadron, Troopers Zobair and Kakkerlakker, armed with Lasguns and Explosive-Tipped Hammers. 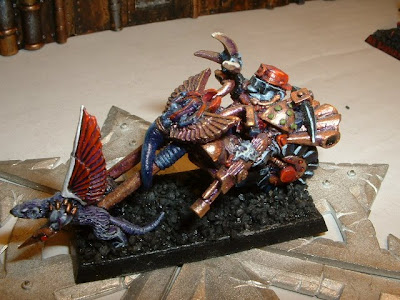 First is Dane "Klawful" Kakkerlakker, named for his Genestealer Claw and the Masters of the Universe Evil Warrior, as well as the irresistible opportunity for an awful pun including the word awful itself. They say Khorne knows no Humor, but many of the bones of His Bone Throne are funny bones (roughly .35 percent). Also, "kakkerlakker" is Danish for cockroach, which I learned from the 1986 Marvel Graphic Novel "Hooky", starring Spider-Man. Which is why RR Kakkerlakker is mostly red and dark blue, but also has some prominent white highlight lines on the black areas. Though it is a strange brew, Spider-Man comic books, along with Cobra action figures, and a bit of the flag of the United States, supplied the general colors for the Hungry Ghosts.

Now that we have that Tolkien-level appellation expurgation out of the way, we can see that Klawful is based on Squat Bike Rider 4 and the standard Squat Bike in two-wheel form, minus a headlights piece.

Rough Rider Kakkerlakker earned his nickname through an interesting twist of fate. While facing the dread enemy Tyranid in battle, Kakkerlakker lost his right hand, which spurred him into such a blood-blind frenzy, that he attacked and devoured all of a Genestealer except the right hand. That hand was fused through the power of bad-assery to the bloody Squat-stump. And the melded-monster Klawful was born with a thirst for vengeance. To go along with the claw hand, I used a long Pick type weapon in place of the more standard looking explosive Warhammers that the other riders have.

I also removed the boring Las Pistol he was originally armed with and replaced it with a larger Las Pistol originally from one of the late 1990s Chaos Cultist Demogogues. I lengthened it a bit more with some green stuff, to produce something looking more like the Lasgun it is meant to be.

This left me with a model with many curved points in its design, so the obvious next step was to add more of them. I am not sure whose standard top I used, most likely Dark Elf of the early-mid 1990s, but I am not feeling like looking it up. A curved horned demon woman with curved swords and a nice spreading winged back to go along with the spreading forms of the Genestealer hand and the exhaust pipes at the back of the bike. The figurehead also gives a bit more protective metal to the cycle, to make it just a bit less ridiculous to charge headlong into the enemy with an exploding hammer. 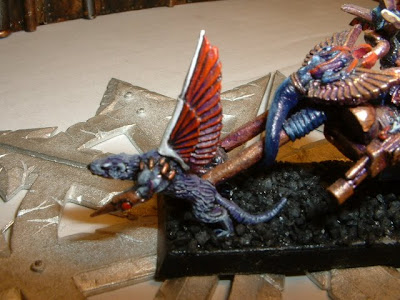 In this close-up view, the winged demon lady can be seen a bit better. Her snake tail wrapping around the bike is made from green stuff. A winged demon lady just seemed right on a motorcycle, despite any potential Slaaneshi implications.

Another plastic mutant Space Rat from the current Skaven sprues helps fill the empty space that hangs heavy over the front half of the Cycle bases. Our rat's (let's call him Angelus) leaping position is at about the same angle as the spokes of the bike, providing a nice contrast. He also has been given extra speed potential with the addition of a mechanical wing, at a perpendicular angle to the demon's wings. It is from one of the Dark Angels Helm Bearer Jawas. 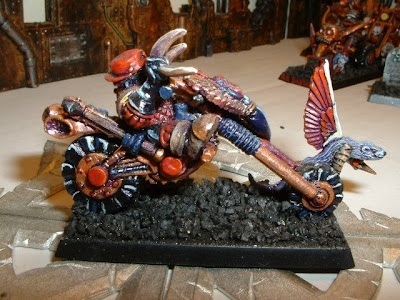 Here is Klawful from his right side, and we can see that Angelus, moreso than the other Space Rats, has been painted in colors similar to the Squat Rider, with the fur matching his skin and his bandage and wings going with the claw hand. 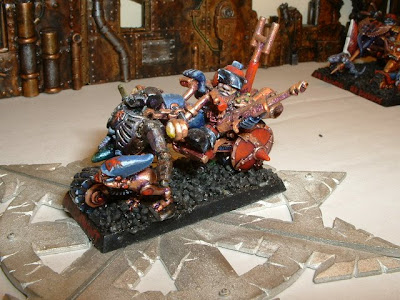 The last of the Thunder Chiefs (for now) is Zigmunt "Revnant" Zobair, whose name has no convoluted story, just a wee nod to biker rockers ZZ Top. For this model, the rider used is Bike Rider 6 without modifications. He also uses the basic Squat Bike in two-wheeled form, with the Headlights bit and several other additions. 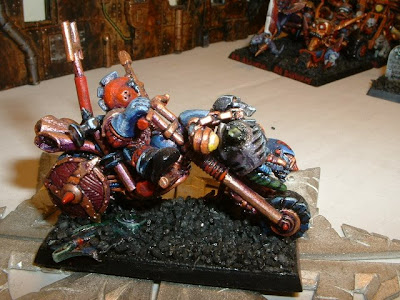 From the right, Revnant has the standard Warhammer added (and the gaps between his feet and the bike body filled in). I also made a couple of design changes to the bike, including adding a spurious antenna from some Tank Sprue, since so many of the other Bikers have something sticking up into the air.

I also discovered that Chaos Marauder Shields are the same size as the Squat Bike Wheel, and used one on each side to add Spikiness and some nice Chaos Arrows. I've also thrown a broken bit of Dark Eldar Scourge Wing in the rubble under his tire.

But the more interesting additions are Thunder Chief Zobair's captive and familiar. 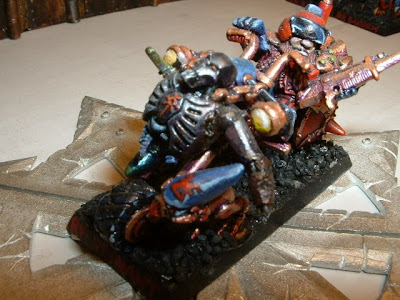 Here is a closer view of our captive, most of the upper half of a Necron Warrior. It came to me in broken form, with some terrible excess glue damage to its arm and back. I painted it a greyish silver, and added brown and black ink to the glue damaged parts to simulate a Meltagun encounter. The Necron's other arm was entirely gone, but I added a cyber-stump that started out as a two-handed sword for the Epic-scale Chaos Lord from the first Chaos Sprue for Epic. I positioned it so it aligns with the Necron's gaze, and looks like the Necron is still trying futilely to attack or break free with the stump, while its right arm hangs uselessly.

The Necron came with some tubing in the torso design already, but to simulate more damage and helpless writhing, I added several extra bits of tubes and cables, including a large old Genestealer tail stump, painted with an ancient Citadel metallic green color now lost to the Mysts of Tyme. Ok, it's Glistening Green, and was available for most of the 1990s, maybe later. For me, the metallic green was intended to draw attention as an important processing engine for the Necron, which was positioned so it was also pointing slightly upward as the Necron strains to break free.

Breaking free is unlikely, because I decided to attach the Necron to the Bike with studs driven into its neck, a la Frankenstein's Monster, attached to chains wrapped round the headlight bars. The chains are a mix of metal bits from some old Heavy Bolter and green stuff. 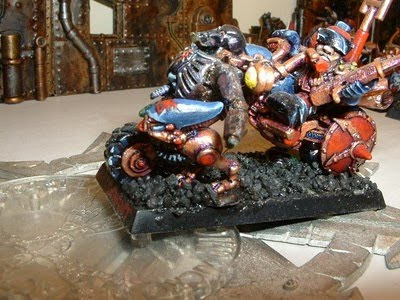 Revnant's familiar is what I intended to be a cruel mockery of a Wraithguard created by Khorne upon a whim. Instead of a large powerful form for the Eldar spirit to inhabit, this Striking Scorpion has been trapped in the puny cybernetic body of one of the Mousers from the 1980s Dark Horse Teenage Mutant Ninja Turtles series. The Scorpion's head has been attached with greenstuff and some plastic cable from another Eldar bit, and been repainted to show its devotion to its new master.

Though some of you out there in cyberspace may be concerned about a Mouser among the many symbiotic Space Rats squeeking across the battlefields with the Hungry Ghosts. Rest assured that this Striking Scorpion-Mouser monstrosity is fated to feed only upon scorpions for survival. A Necron Scarab might do in a pinch.

This Thunder Chief biker has turned out to be one of my favorites in the army so far. Part of this is the completeness of the overall scene created on the base by using multiple figures. But I think another part of it is a contrast with many of the other models in the army. On most figures, I've tended to try to align elements to create a unified gaze in some direction. With this biker, I did the opposite. Since the Bike Rider was already designed like he is looking toward something distant on his left, I gave the Mouser a head positioned like it was stretching a bit to look at something nearby, but up and to the right. The Necron, though, is gazing up toward the viewer, as if asking for help, while the bulbous eyeball headlights stare straight ahead. It gives a fractured and chaotic sense of multiple points of view, with the added fun that we, as the viewer, don't actually have any idea what any of the heads are looking at.
Posted by Hungry Ghosts at 12:21 AM