Second to last, but longer than the rest, we have our ninth Thunder Chief Rough Rider, Trogoth "Trollo" Butkovich. We start with some pictures of the bike and biker in bits form, but with the first round of accessorizing and biker limb bits picked out. 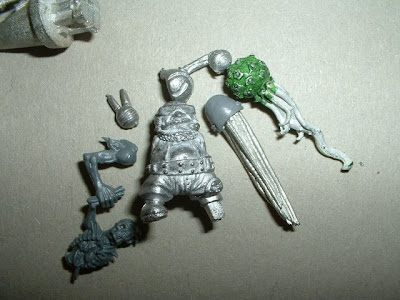 Here is our rider Trollo, the Squat Pirate with Wooden Leg. I'm not sure if that is his official name, or if the Pirates series were just numbered. That mystery aside, right now I'm going to mess around with his balding head, since this sculpt is one of the less interesting for the Pirate Squats. He will have a headlamp inserted in his skull (Squat Bike version, but the headlamp is a miscast), and one of his ears replaced with a little Robotech Battloid Head Antenna, from the 1980s Dark Horse Miniatures series.

I'm not so sure about the arms, but am leaning toward another tentacle/cables wrap-around the handle arms, one of the old metal Tyranid Spore Mines, or another bunch of Inquisitor scale power cables. I am not so sure why I'm so into using tentacle arms. I think it's a Marvel Comics thing, some sort of influence of Spider-Man and Doctor Octopus and maybe Reed Richards sending out long webs, robot tentacles, or Mr. Fantastic arms to wrap around and grab things.

I'm think about using a trophy arm from one of the Undead sprues on the right. His wooden leg is going to be replaced with something more high-tech, but I don't know what. 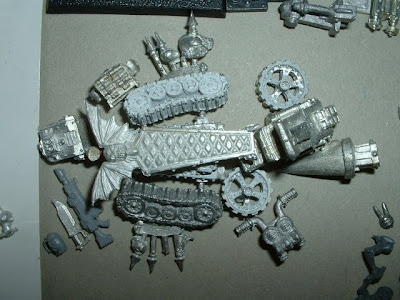 Here is the motorcycle mapped out. In the front, I'm using the handlebars pieces left over from the Ork Wartrack Front Wheel used in the previous Rough Rider, Ken. The front wheel itself will be made from the Seat piece from the 2nd version of the Blood Bowl Dwarf Death Roller. I'm going to add a skull-patterned battering ram head to make a spiked front, from one of the Warhammer Siege models.

For the rear of the bike, the first Ork Hop-Splatt Gun will provide the Chassis, and maybe its wheels, but, may use the Wartracks again, or both. Melkhior's Seat will be used for Trollo's, and some Chaos Terminator Shoulder Trophy Spikes as fenders. A Space Marine Devastator backpack or two will be used as the core of the engine in the rear. I've picked out his Lasgun, just Cadian with the eagle cutoff, as well as a useful old Ork Knife and a Beer Mug from the Dwarf sprues. 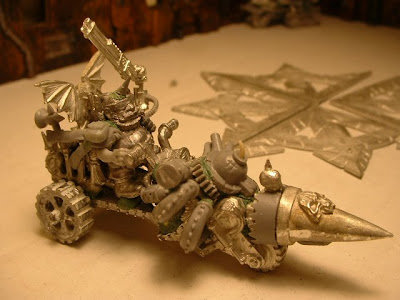 A diagonal angle gives the best initial view of the assembled cycle, and we can see both rider and cycle turned out different than planned. Some parts are the same- the chassis, seat, and fenders worked as predicted, and I decided to use the Hop-Splat Wheels and leave off the Tracks because the wheels went along better with the Terminator Spikes.

The whole front section turned out more complicated than planned. To make the bike as strong as possible, the Death Roller Seat was positioned at a diagonal compared to the chassis and battering ram front. A good amount of greenstuff was used to fill gaps and make the model stronger, but the area between the handlebars and battering ram is long and boring.

I concealed the skinny part of the battering ram by using some curved plastic Ork armor bits and the metal Skull Spike from the Gorkamorka Ork Trukk. Trollo's beer mug was placed at an easy-to-reach position near the handlebars.

But the main change was building an engine in the front. The bottom of the Seat already had some machinery sculpted, but some areas on the seat were in a wood pattern and I wanted to cover those. The left side was given 6 pipes sticking out by using a couple of Imperial Smoke Launchers. The bulge in the center and the gear come from the Dwarf Cannon sprues. On the right side, the curved pipes are made from a couple of the Chaos Warrior Musician's Horn from the 1990s plastic CW sprue.

After building the front engine, it is clear that a Curves Surfaces & Skulls design will be emphasized with this conversion, along with the mandatory Spikes that Khorne demands. I decided to make the pipes on the right larger than the left to balance out the prominent left arm that was used. This Thunder Chief is turning out to have even more of a Road Warrior look than the last. Below is a picture showing the battering ram and engine as the cowering enemy would. 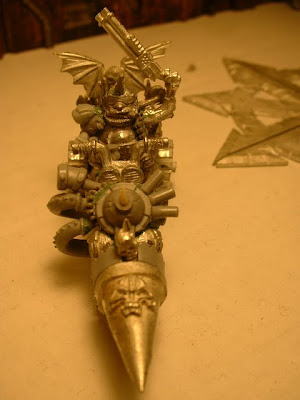 As these pictures show, Trollo's arm's are not as planned. I decided against the tentacles/cables and corpse for something more along the Mad Max scheme. His right arm is from the Rogue Trader Bare Human Arms sprue, going along with his bare chest. It was bulked up with a small piece of Empire Knight armor and a Dwarf pouch as a shoulder pad, with a couple of bits of cloth streaming from it, cut off another Tomb Kings part. Some more Dwarf pouches are added to his belt and a Khorne Berzerker grenade to his vest. The right arm is the cybernetic shotgun from the Necromunda Pit Slave Champion with a plastic cable from one of the old Eldar Guardian arms attached.

The Round but Spiky theme was continued by adding a single horn in the Unicorn position on Trollo's head. The three spike group of that horn and the antennas makes some suspect Trollo has an unsavory past relationship with the Big Plague Papa. 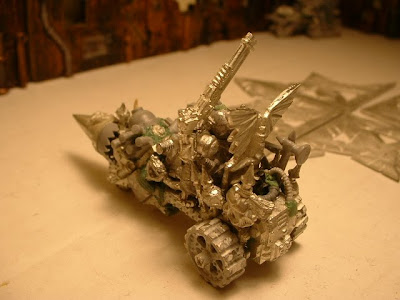 Here is the view from the back. I've still used a Space Marine Devastator backpack (Dark Angels Heavy Plasma, I think), along with some more plastic cables and machine bits to stick with the original idea of the engine in the back. I've also used another White Wolves bit for his exploding warhammer.

Below are some more images of Thunder Chief Trollo from various perspectives. 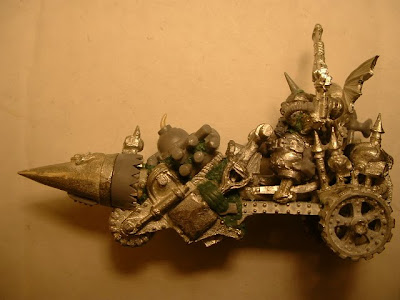 From the left side. I've used greenstuff to strap on an old Dwarf Miner's Shovel to cover an area of wood patterning on the Death Roller bit. A Squat Army can never have too many shovels. Trollo's wooden leg was taken off and replace cybernetic one. I can't remember where it came from, may be an part of an old Epic mini. 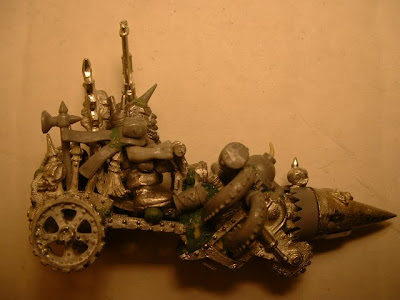 From the right side. Melkhior's Seat worked well, long enough to bend so that it could be the seat cushion and the seat back. I also added a footrests from greenstuff. The Servants of Khorne do not need seat cushions and footrests, but only the most extreme consider such comforts outright Slaaneshi.

This mini also shows the problem with the old Rogue Trader arms, Trollo is steering his double-engined oversized machine with a fist pressed against the handlebar. I could have made some fingers, but let's just say he uses his Ear-Tennae to control the motorcycle by radiowaves. 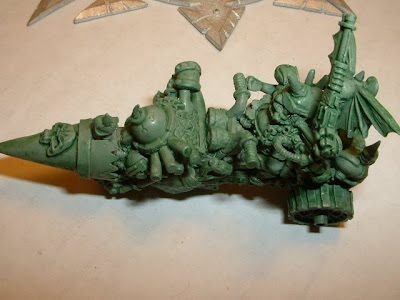 Here is Trollo from above. Influenced by his name, I primed him Codex Grey and then washed him in dark green. I'm not sure if the wash has any influence on the appearance of the model in the end, but I think it helps me notice details more easily. It also be aesthetically interesting to combine primer color and a wash on its own, making them look a bit like they are made of colored stones or different kinds of wood. 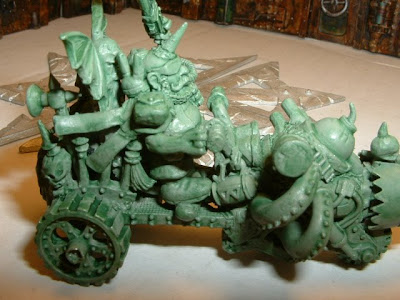 A close-up picture of the details of Trollo and the front engine. I've made the horn in the center of his head have a couple of layers, using greenstuff at the base to make it look like there is an ugly scar or sore that was caused by its eruption from the skull.

This conversion has also turned out to have a lot of rows of rivets, although it may actually be harder to make a 40K conversion without ending up with lots of rivet patterns. Unless you are a leaf eater covered in your fancypants gems pretending dancing is history. 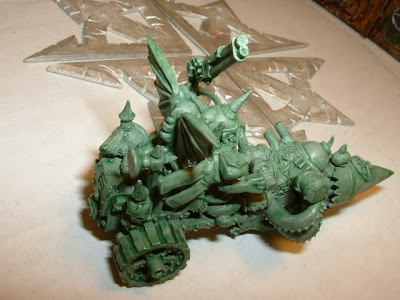 Another view from above, a nice funny-car dragster appearance. Trollo is the guy who turbocharges straight at the Land Raider hoping he will poke a hole through it's armor with his battering ram. Waving his shotgun and singing "Breakin the Law", which will still be a popular song in the grim dark grimness of the future.

Though the vast hordes of hive-civs remain ignorant, The Imperialis Praehistoricae consider the Judas Priest era of human history to have occurred immediately before the Judge Dredd era. Both eras are acknowledged to have a critical and continuing influence on military fashion in the Imperium, with the Adeptus Sororitus specifically linked to a person known as "Judge Andersonius," said by some to be one of the most powerful psykers of Imperial prehistory. 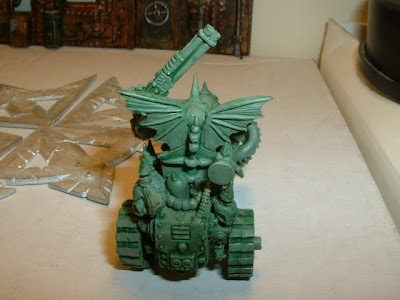 Finally, as the bleeding wounded victims see Trollo, speeding away. The second engine is attached to the Hop-Splat Gun chassis and sides of the Terminator Spikes, with the empty space filled with random cables and container parts from the Bits Graveyard. Melkhior's seat also is a nice sculpt from the back, and Trollo's horn peaks over the top.

That's it for Trollo. Here's a sneak preview of the Hungry Ghosts Leman Russ. 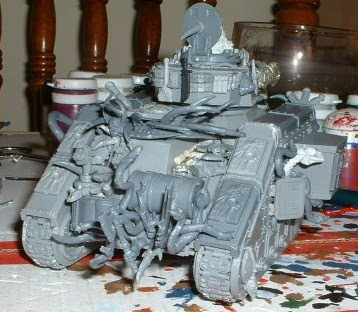 Tanks with Tentacles!
Posted by Hungry Ghosts at 1:51 AM