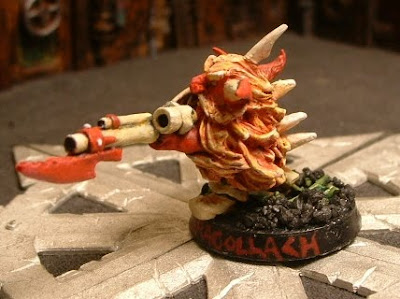 Today's Storm Trooper is Uklathemoq Bragollach, also of the Burnt Scorpions squad. He started life as the Chaos Dwarf known as Very Hairy (don't smirk, the mutation gave +1T) or Axe 12 in the Red Citadel Catalog.

Inspired by some of John Blanche's work on Bloodletters, I decided to make him Very Firey instead of Very Hairy. This was obviously done with paint, not bits. But the bits added were painted to help establish boundaries on the color-range between Ukla's molten red skin and white hot pointy parts. I also gave Ukla a couple of Gnoblar ears behind his horns, to add some additional red contrast to his head. Now Trooper Ukla has a red nose, ears, and cheeks, and white horns, eyes, and eyebrows. 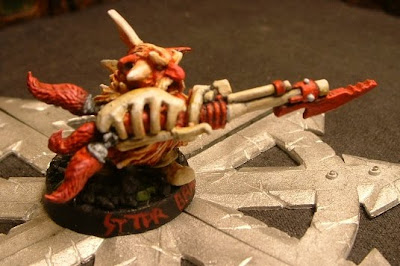 From this side, we can focus on Tpr Ulka's main converted area, the Axe that must become a Gun. You bet that's a Skeletal Horse's ribcage over Ukla's arm (with some additional boney bits to hide the fact that the gun barrel disappears behind Ukla's left hand). His original axe blade was preserved as the bayonet, and the gun barrel is from another old favorite here at Hungry Ghosts, the Epic Knight Paladin. Specifically the gun-barrel part of his right arm, this time upside down. 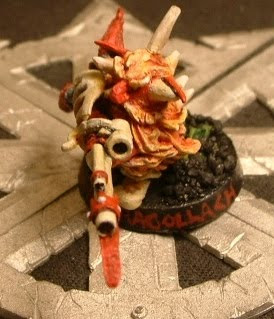 This mini's basic pose has him jutting forward to a point while splaying out in the back in a series of pointy spines and flames/hair. Keeping the axe head as bayonet and using boney bits that point forward emphasizes Tpr Ukla's aggressive stabbing-and-jabbing thrust. Ukla was glued to the base with his feet facing the short side and as far forward as he would go for the same reason. 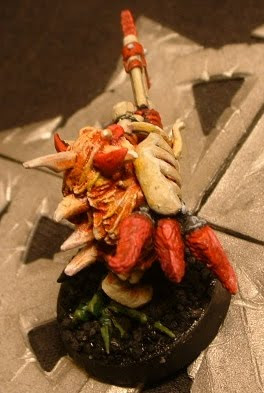 Similarly, I attached 3 Wolf Tail bits (Space Wolves) to the butt of the gun, flying in an arced pattern similar to Ukla's spiny ridge. The wolf tails were positioned so that they look like they are attached at a single point and are bouncing in response to the forward movement. Along with the spikes, they help fill the large amount of empty space behind Ukla in a way that makes him appear bulkier than he really is (which was the reasoning behind the +1T for the Very Hairy Mutation).

Finally, we have some Tyranid spines on the base, to remind us to be thankful each day for the spikes we receive. I mean, because I can't make a Chaos Squat without some Skeletal Horse, Tyranid Biomorph, and Epic Knight bits. The Nid bits are also purposefully splayed in an outward pointing arc, echoing Ukla's spines and tails. But they also being grounded beneath his feet, symbolizing the many victories of the Hungry Ghosts against the Tyranid menace.
Posted by Hungry Ghosts at 9:00 AM