Back to the Chaos Squats miniatures, the off-table reserves crowd is getting large. Today we have Storm Trooper Troma Orthanc, the sixth trooper of 10 in the Burnt Scorpions squad. 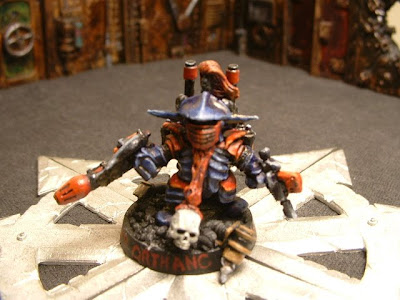 Storm Trooper Troma is another Chaos Dwarf conversion, starting as the C16 series Dwarf named Dunuin Dust-Tooth, aka Flail in the 1991 Red Catalog. I got him without the flail, or else I probably would have let him keep it in honor of the jackass Flail-Flopping Dwarf warriors I kept rolling up in D&D games of yore ("You say you fellows don't eat Elves? But he's already dead..."). But the Burnt Scorpions needed a special weapon trooper, and the double-gun look works for him.

I painted him to emphasize his segmented pattern, with red pieces of armor creating borders for his legs and arms and similar highlights on his guns and backpack. The laspistol is a metal one from one of the Necromunda sprues, with a bit of an Empire Knight Helmet attached.

Trooper Troma had no beard, and that needed fixing. So now his beard is one of Ghoul Vomit with a Lizardmen Skull totem attached to the ended. I also remodeled his head to provided more segmenting lines, with another Empire Knight Helmet bit over his mouth. I also once again used a bit of the Tyranid Biomorph sprue on top, giving him a bit of the ninja look.

By this point, it was obvious that a triangular outline was developing with each gun & arm and the vomit-beard as the sides of the triangle. So I gave him a topknot from a Chaos Warrior Head with a small skull on the base to pair with the larger at the end of his beard and colored the hair to match the beard. 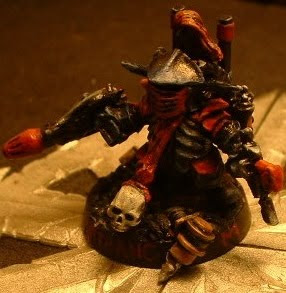 Those who have been following for a while know that I have trouble with adding extra heads or small creatures to the Hungry Ghosts. The photo above gives a closer look at our squeeky little space mouse popping his head out of a tunnel (from some sort of vehicle sprue). Like Trooper Troma, the rat & tunnel form a triangle-attached-to-a-ribbed-tube look. 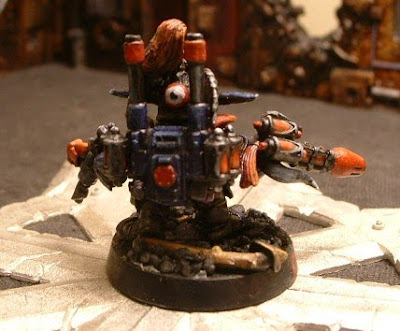 From behind, Troma has a backpack made from an Epic Ork Battlewagon Turret, giving him an industrial feel and keeping the tube theme going. Troma's Meltagun can also be seen more easily from this angle. The tip is from the 1990 Eldar Guardian Weapons sprue, while the body is made from a Black Templars lantern accessory, painted to look like a fluid filled cylinder. Some grenade accessory bits from the Dark Angels are attached to the gun and backpack, painted to look like ammunition canisters filled with the same red fluid. To increase the aggressiveness, a Chaos Marauder Champion's helmet lost its big thick horns. The hair tuft was added to the gun because the head has one, and just as a reminder that there's gravity on the battlefield.

Trooper Troma has a giant cycloptic eye on the back of his head, to keep the tigers away. Actually, it gives a focal point to the back similar to the light colored skull at the end of the beard. But while that skull is flying forward at a low level, the Eye is recessed and high.

The mouse (from a Bretonnian Archers bit) was given a symbolic tail with a thorny cable wrapping around Troma's feet in the back. Which I can't remember where it is from, previous edition Skaven Rat Ogres probably. 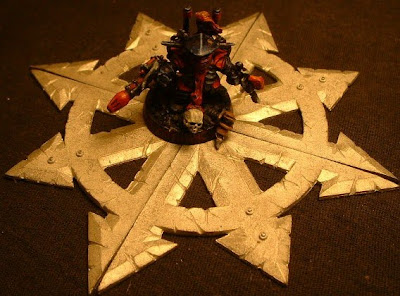 Finally a picture of our Storm Trooper posing as the central spike of the Chaos Star.
Posted by Hungry Ghosts at 9:00 AM