Another day, another Storm Trooper. How long can this go on? 4 days. 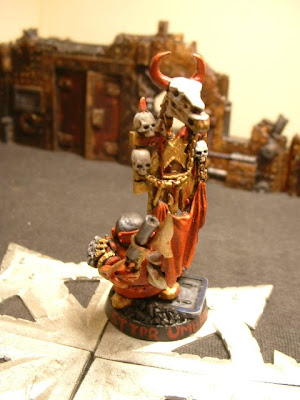 This is Storm Trooper Zuanic Umbar from the Burnt Scorpions squadron. Trooper Umbar carries the no-game-purpose-squad-banner for the Burnt Scorpions. As the banner is shoved right in our faces, we'll start by noting that the bulk of the banner is the Standard bit from the 3rd version of the Bloodletters (the super-pointy cut-your-fingers edition). Atop that might symbol of Khorne, we go back for our all-star utility infielder, the Skeletal Horse. From the Skeleton Army box now two decades old and still working. The horns come from the Skeleton Army sprues as well. 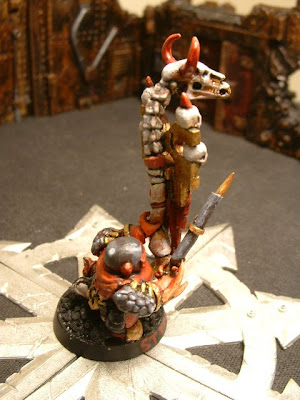 From the right side, we see that Umbar is made from a WFB Dwarf not of the Chaos variety, the Flame Cannon Gunner. Another of our favorite sprues, the Tyranid Biomorphs, come back with the Adrenal Glands as Umbar's shoulder pads. This mini is heavily armored in a stocky round way, and the Nid bits help reinforce that with their turtle-shell look.

The rest of the arm is made mainly from one of the metal Rifle bits from the Mordheim Carnival of Chaos set, a thin tentacle arm. Thin tentacles are not very menacing, and did not really fill the space, so another spiky bifurcated tentacle from the current Chaos Spawn sprues was used to make Umbar more threatening. The Bayonet bit attached to the Rifle is from the RTB01 box.

Umbar's left arm is just some greenstuff with one of those weird-angle heavy-weapon Space Marine hands stuck at the end. 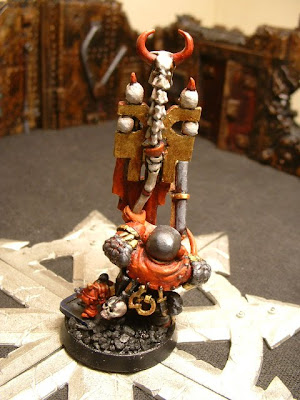 Here is the back of the banner, showing that the Skeletal Horse's leg provides the rest of the banner pole. The leg is long enough to rest against the body of the mini, providing extra support for the plastic bits supporting the metal Khorne banner.

The Gunner came with all the interesting instruments visible, just the skull (Lizardmen) was added, at a swinging angle to give the impression that Trooper Umbar is trudging across the battlefield. Even just one small bit added at the right angle can make an interesting change in the overall appearance of a miniature. The angle of the knife also aids the impression that Umbar has just put his right foot down. 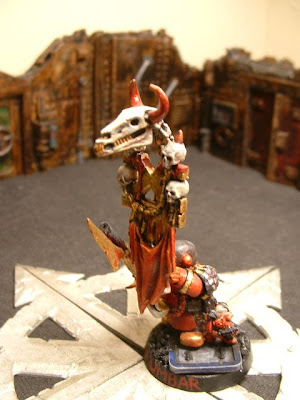 Trooper Umbar comes with a little sidekick. He is one of the Chaos Space Marines from the 2nd version of the Epic Chaos sprue, and his stockiness nicely worked with Umbar's proportions. I was also able to position him so that he looks like he is slowly moving along with Umbar, checking the left while Umbar watches the right. It is not fun trimming the bases off Epic minis, not fun at all.

They are stomping on a Leman Russ hatch-flap, but we probably all already knew that. It is painted so it both contrasts with Umbar's coloring and aligns with it, giving the impression that Umbar and Little Umbar are stepping onto a small stage. 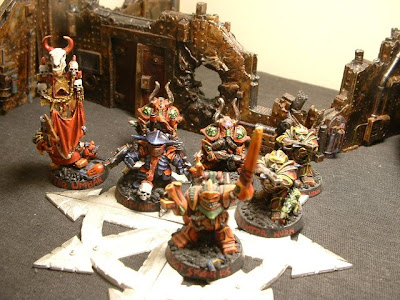 Burnt Scorpions now 7 Strong
Posted by Hungry Ghosts at 9:00 AM