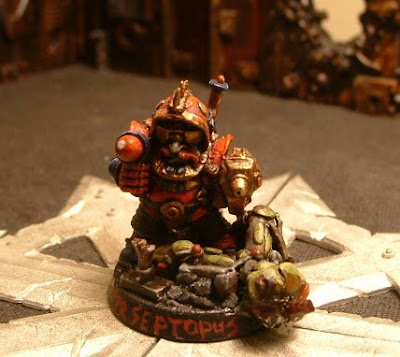 Unlike the 3 previous Storm Troopers, Geely Septopus will be a member of the Black Stars Storm Troopers, painted in similar color scheme to other Black Stars. Also unlike the last 3, he is a Squat instead of a converted WFB Dwarf (Iron Claw Squat from WD 108, number 420217).

With this trooper, I tried out an unbalanced structure, with a tight focus on the facial region on his right, while the left side sprawls over the front of the base and juts out into the air in the back. But this unbalanced structure is intended to encourage a second pattern, where the color of the antenna is painted similar to his Mystery Scanner and face, leading the eye to bounce off the antenna toward Geely's face instead of continuing off into the distance. At the same time, the Striking Scorpion's left leg and the bit of blasted barrier set a boundary across the front stage right, again encouraging the onlooker to bounce their gaze up toward the face. (Hungry Ghosts is wise in the ways of the eye-tracker machine) 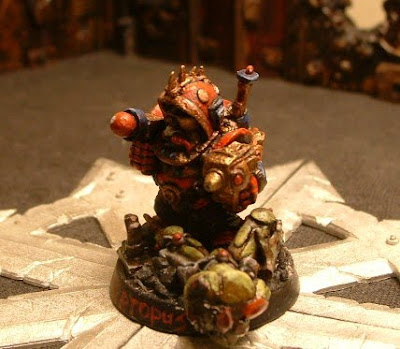 From the side, we notice that there's a lot of Rogue Trader Scorpion 2 sticking over the edge of the base, with the protruding neck bones made from a plastic Skaven knife blade. I also stuck a dessicated severed Zombie hand to the Eldar's leg, to add some mystery as to what the hell mangled him so badly.

Trooper Septopus was given his mandatory Chaos Spikes as a crest across his head, from the shaved off edge of a Lizardman Spiked Club/Sword arm. The spike pattern of the club is echoed by the serrated edge of the exposed Eldar spine.

We can also get a better look at Geely's freaky gun, which probably contributed to him getting cut from the 1991 Blue Catalog. His weird little cyber-device in his right hand didn't help much either, and has been enhanced here by sticking a round little plastic missile launcher bit to it, and adding a shiny red Mystery Ball at the end (leftover green stuff). The antenna bit is another Imperial heavy weapon fragment. By now, there has been so much conversion madness that I'm finding Chimera parts in the bathroom. 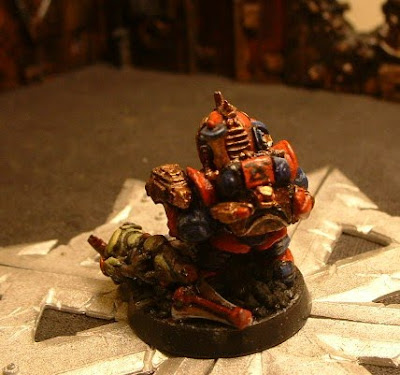 Storm Trooper Septopus also has one of the little backpack friends that are so popular with the juves these days. It is made from the arms and face of an Epic Robot (Castellan?) from the second Space Marines Epic sprue. Why didn't they put a Dreadnought on the sprue instead of a Robot?

Anyway, part of my fetish with little robot/cyborg critters, aside from their sheer amusingness, is meant to mirror the Imperium with their Servo-Skulls and Servitors. In my mind, similar critters should be found scattered throughout the Squats army, as the Squats are the more technologically-advanced civilization that showed those no-beard grass-monkeys how to make a Servo-Skull in the first place.

Finally, I added a partial Eldar Shuriken Catapult in a position and coloring that recalls a severed leg, and provides an extended boundary making Septopus fully enclosed by the dead Eldar. 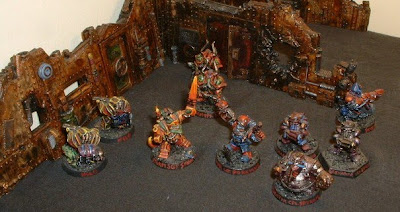 "Looking awesome, Sgt Skorpios!"
"Looking awesome as well, Sgt Porkulus!"
"Let us go forth and be awesome together!"
Posted by Hungry Ghosts at 9:00 AM