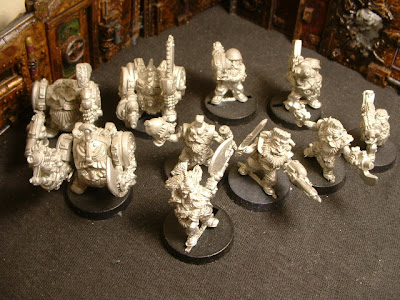 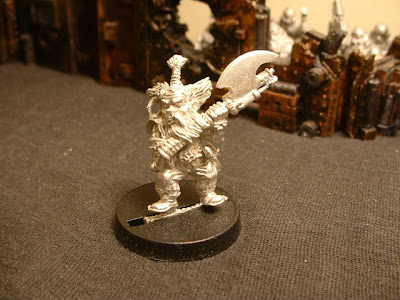 First is the Limited Edition Squat Berserker Champion. This Squat is a single-piece sculpt armed with a what is probably a Lasgun that also functions as a double-handed Power Axe. He has a rather complicated hairstyle, ornate clothing, and a malevolent glare. 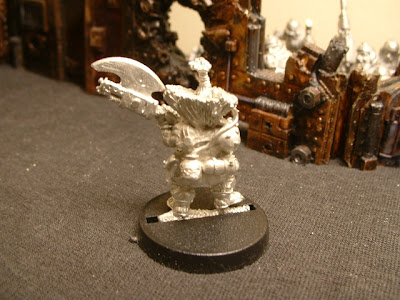 From the back we can see that this Berserker has put a bit of forethought into equipping himself for battle, not very typical for his type. 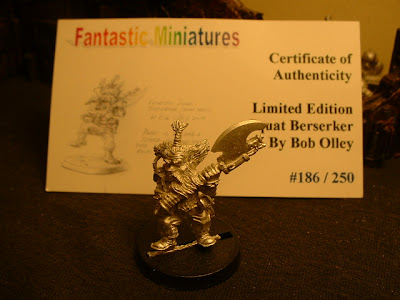 This particular model is 186 of the series of 250, and came with the business card sized Certificate of Authenticity. A compact and effective sculpt that wards off any conversion attempts with his fierce gaze and big axe. But that lower right leg is looking rather vulnerable to the X-acto-wielding mutator, Mr Berserker. 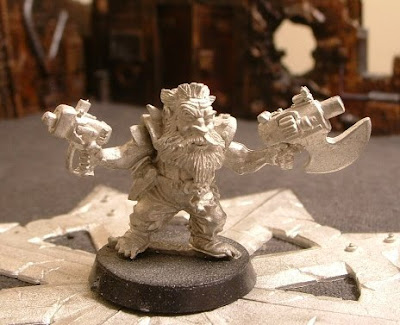 The other Squat Berserkers came as a set of 3 Bodies and 6 separate Arms to mix and match. Berserker 1 has a Road Warrior in Ninja Booties outfit and 2 Very Large Pistols, 1 with a Very Large Bayonet. Like all proper Berserkers, he is in a lurching forward for the attack position.

These Berserkers were molded with pins in the arm-slots and holes in the arms, which affected the range of possible positions. But since the arms were separate from the bodies, there was still the opportunity to match the weapons with the bodies. B1 has his legs spread out, as well as his beard and hair above his ears, so he was given arms that would also be spread wide, and the nubbins sticking out on top of the guns work well with his hair tufts above his ears. 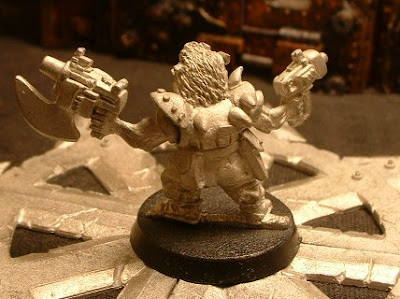 B1 has a nicely armored back with some fine spikes to give second-thoughts to any creeping Tyranids who might be contemplating an ambush. 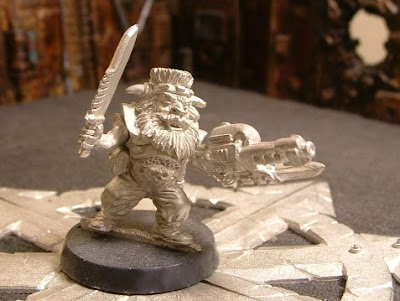 Berserker 2 bears a Headband of Thorns and also a fondness for Skull-shaped belt-buckles. He has been given a fine machete with serrated edge. Also some sort of Flamer or a plasma-spewing gun, again with a bayonet should the fuel canister run dry before the enemy is crispy or the gun has exploded. 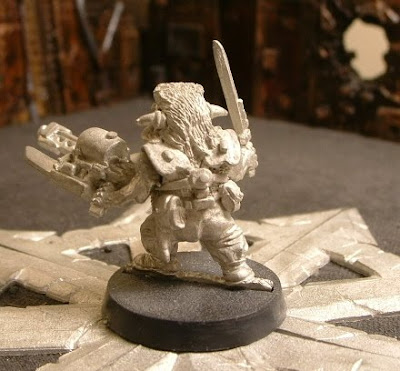 B2 is also nicely protected from treacherous assaults from the rear as he rages forth across the battlefield. B2 was given the Left-Arm with Big Flamer Gun as his stance was advancing forward with his left foot, while the machete arm worked better with the straight right leg, ready to hack to death any still-moving burning critters. The circular shapes on the Big Flamer Gun go nicely with the circular bits and buttons on his gear. 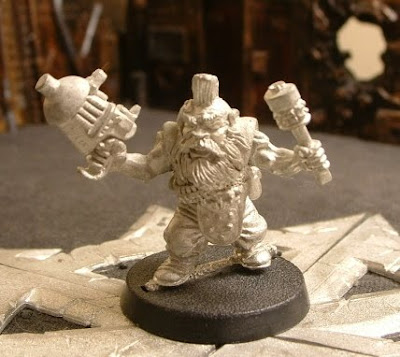 Berserker 3 shares the Mad Dwarfs Beyond Thunderdome style. His Mohawk hair and bald head went well with the potato-masher grenade as well as the shape of his probably-plasma pistol. 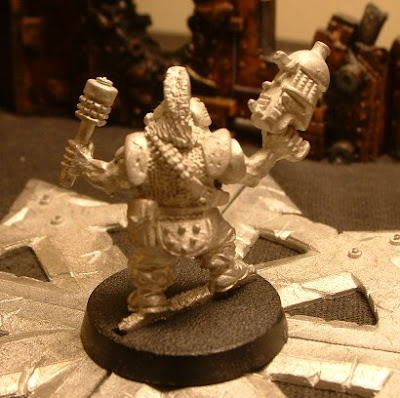 Lots of small ridges and bumps on B3 from combining his body with the Grenade Arm and the Plasma Pistol Arm. I pity the fool who makes fun of his parachute pants. 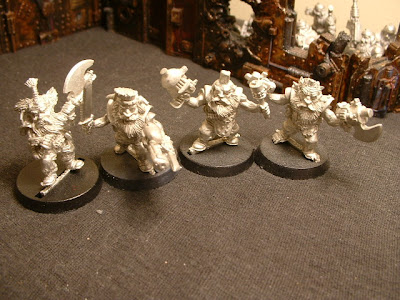 Overall, these Berserkers are a nice groups of frothy-mouthed additions to the Hungry Ghosts army. The sculpts all fill out their bases nicely, while the different stances allow them to be placed close together without getting their weapons caught together. Their style is also a departure from both the old Bob Olley Squats made for Citadel and the Scrunts Space Dwarfs made for his Olley's Armies brand. And while their upper bodies are well detailed, those bare arms and puffy pants leave a bit of room for adding some extra spikes or chaos symbols.
Posted by Hungry Ghosts at 1:27 PM