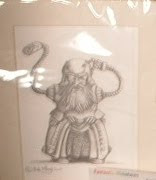 Today we begin our journey into the full insanity that is the Legios Moriad XIV Expeditionary Force, and lear why so few Hungry Ghosts get completely painted- so many Space Dwarfs, so many conversions, so many vehicles, so much other weird bits of sci-fi funkiness, that distraction looms heavy, heavy on a mind that needs to find a special place for each and every little thing.

Like our mutant Scrunt to the side, Hungry Ghosts has a problem with self-reinforcing feedback loops that leave the floor covered in bits, and many a World War II documentary on the dvr unwatched (I saw them already anyway).

Now our visit to Hungry Ghosts Headquarters will show the extent of the madness.

Here we are on Level 1 of Kastle Khorne. This level holds all of the Hungry Ghosts troopers who have been fully painted. Plus their mascots and corpses, and various hangers-on. Like our loveable medical team, Doc-Bot KillMaim666-74445369 and Nurse Dammit Getoverhere, seen below. 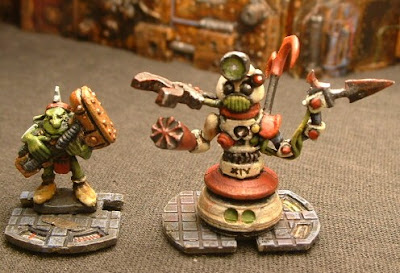 Can Doc-Bot KillMaim666-74445369 feel our love for it?
His limbs are stained with those who asked that very question. 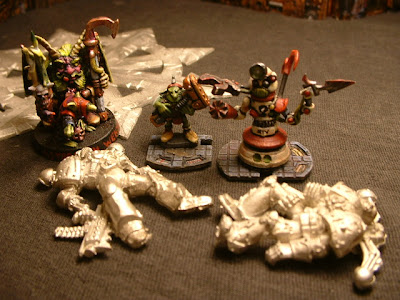 Do they look like they need a foot to you? 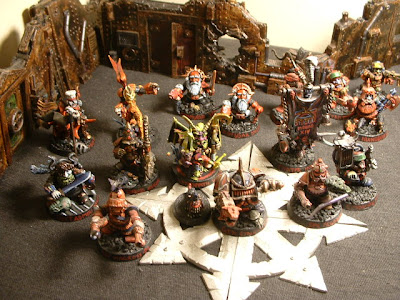 HG-HQ-Level 1 features the Hungry Ghosts Command Squad, its Squat Advisers, and non-Squat allies, such as Ambassador Lucifuge Redfinger von Khorne and Ghoti "Gravy" Chunckx, the Master of the Cuisinatorium. Redfinger will eventually play the role of Commander Creed if I ever actually finish an army list; Gravy Chunckx will continue to be entertaining fluff. 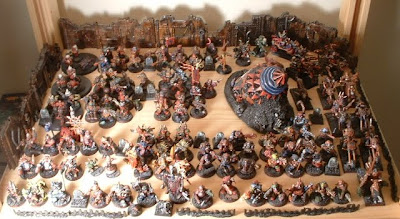 To review our forces, the Hungry Ghosts currently consist of:
General Jengiz Stalkarlik with his Command Squad and Advisers;
Battle-Brother "Badger" Machiner with his Venom-Whip;
most of a second Command Squad led by Col. Tony "Iron Beard" Schtarken;
2 squads of elite Storm Troopers, the Burnt Scorpions and the Black Frost;
our Hardened Veterans of the Blood Fist squad with their Termite transport;
the Thunder Chiefs Rough Riders (2 are not quite finished though);
and the Rotted Hearth Infantry Platoon under command of Captain Red Hister,
with the Black Stars and Iron Claws Special Weapons Teams,
the Miracle Workers Heavy Weapons squad,
and 2 of 4 planned Infantry Squads- the Blood Eagles and The Underdeepers. 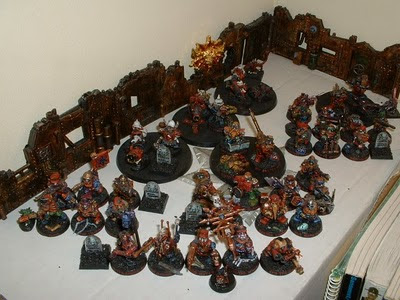 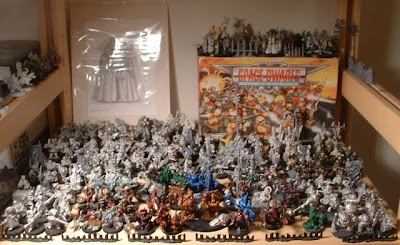 Hungry Ghosts Level 2 is a crowded swarm of works-in-progress and units yet to be assembled and painted. We have our trio of Special Characters on the way- 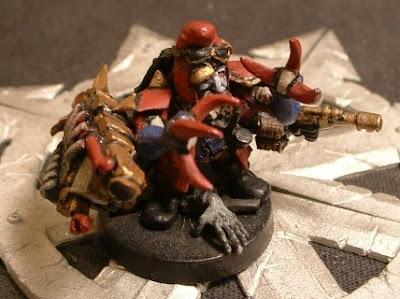 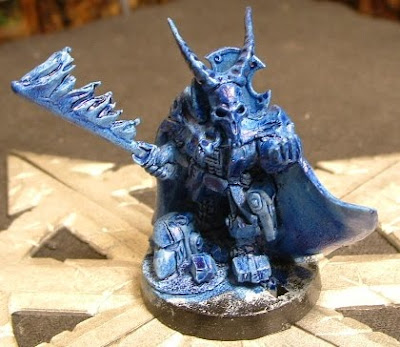 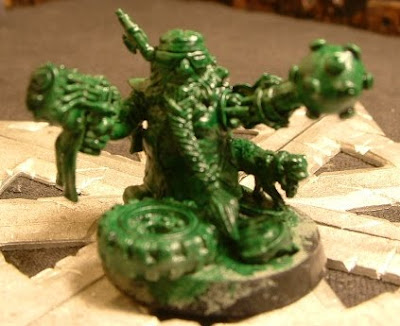 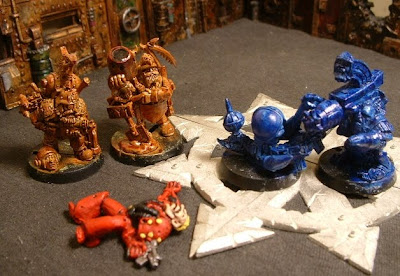 Level 2 also features the rest of the Rotted Hearth Platoon, including a second Heavy Weapons squad, the Lava Kings, composed entirely of freakish mutants. A preview of 4 are shown above. The Rotted Hearth will also grow with the addition of 2 Infantry Platoons, the Night Weasels and the Black Hands. 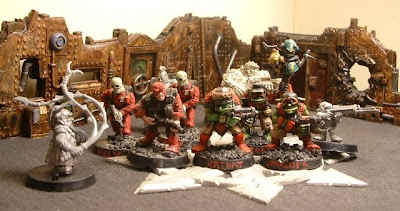 Adding more color to Level 2 is the River Bottom Nightmare Band, a Penal Legion led by Overlord Lobsang Wangdak and composed of assorted Ork and Human Mercenaries that I've had since the 1980s, plus some other rabble that we'll see more of later. 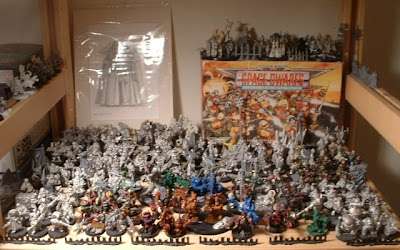 Level 2 also includes many other elements of the Hungry Ghosts. Crowding the shelf are Infantry Platoon 2, the Spectral Beards, including Command Squad, 2 Special Weapons Teams - the Last Dragons and the Steel Cobras, 2 Heavy Weapons Squads - the Terror Bears and The Red Dawn (taking the high terrain upon the Space Dwarfs Box), and 3 Infantry Squads - Captain Tweek's Rock-Eaters, the Bloody Beards, and The Raven Kings.

The Hungry Ghosts Dark Adeptus Mechanicus Wyrm Vulkaan and his Servitors (Epic Imperial Knights) are also to be seen, as well as a mix of sword-wielding loonies who will become Ministorium Priests, on the lower right side. Hiding on the left side rail are 7 of the 8 unreleased 40K 2nd Edition Squats. So, aside from a few exceptions to be seen soon, the Hungry Ghosts Army includes almost every Squat made, plus many converted Chaos Dwarfs and Imperial Dwarfs, assorted mercenaries and bots and troopers made entirely of bits.

Which means I had to create a 3rd Infantry Platoon with Space Dwarfs from other miniature manufacturers, who occupy most of the left side of HG-HQ-Level 2.

That's a lot of Squats. And other Space Dwarfs. Here are some ancient Chaos Terminators, Flesh Hounds, and converted Champion of Khorne, to cleanse the palate: 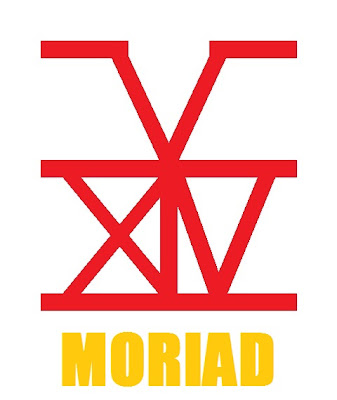