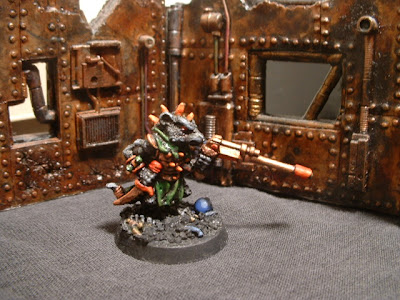 As we know, Jervis Johnson once declared that there would "never, never, never be Space Skaven". Well, explain this, then. Here we have Space Skaven Sergeant Squeek "Squeek" Squeek. Sgt Squeek has been inducted into the Hungry Ghosts army to serve as a Bodyguard for General Stalkarlik. Not that someone as Mighty as General Stalkarlik needs a Bodyguard, but Skaven with Guns are Fun. 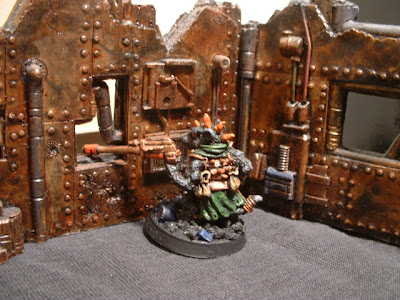 Space Skaven Squeek is one of the 1986 C47 Chaos Ratmen designed by Jes Goodwin. He appeared first in the Autumn 1986 Citadel Journal under the name of Carver. Early releases of this miniature had spikes so sharp they made your fingers bleed if handled unwarily; later editions had the spikes shortened and dulled down. Sgt Squeek is a fingers-bleeding version that is from the first blister pack of Skaven I bought. Plans to make a Skaven army for 3rd Edition Warhammer Fantasy Battle were dashed by the ridiculous numbers of mandatory troops required in the Warhammer Armies book, and by all the exciting Eldar that came out in the early days of Warhammer 40K. And by my short attention span. 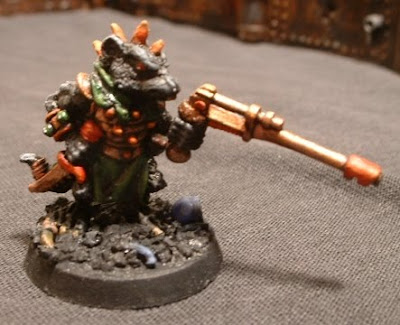 So Squeek first got his gun as a Tech Weapon Chaos Reward as a member of a Chaos Warband from the Realm of Chaos: Slaves to Darkness system. The old Chaos rules let a young lad cram many a different race of critter into one army. Now, we must settle for "counts-as" troopers and corpse minis to satisfy our attention deficits. Sgt Squeek has had his paint refreshed for his new role in the Hungry Ghosts.

Ah, the good old days. Things always seem better in the hazy glow of times gone. But that hazy glow is poisonous gas from use of our rivers as toilets and industrial waste receptacles. Even the delicate lighting of those fancy Monet paintings were produced by streets and streams full of sewage...
Posted by Hungry Ghosts at 11:34 PM