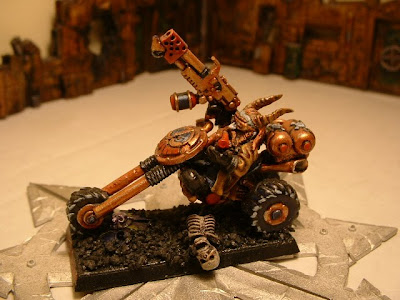 The next Rough Rider up is armed with a Flamer, despite the obvious concerns about whether his velocity exceeds that of the blast of fire. This trooper is named Greebo "Longhorn" Hijar, and he is another Squat who has been lurking on my shelves since the 1980s. I refurbished him for the new Squats army, giving him a few conversions. I've had that skeleton even longer than the Squat, it was part of a White Dwarf-inspired terrible attempt at making a diorama with a cardboard box and styrofoam. I also put in a murky pool using a small & shallow aluminum cooking tin, which quickly got colonized by local spores coming in through the screened windows. Thus, the natural aging of the diorama-skeleton didn't need much improvement before become part of the scenery.

So RR Hijar is on the basic Squats bike, which was made a bit more exciting by adding a WFB Dwarf Shield in the place where the headlamps or bolters bits would go. The Cadians donated the Flamer, both the Gun and Fueltanks. Longhorn himself is the Guild Master Rider, who has been given plastic horns from the WFB Beastmen sprues. These had to be cut and blended in with the help of greenstuff to fit over his existing hair. 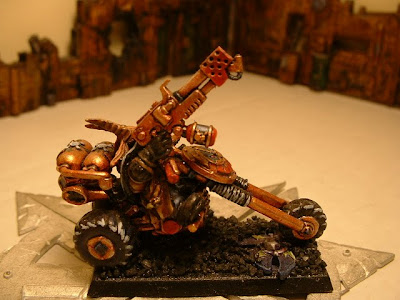 Rough Rider Hijar from the other side. His Flamer is connected to the tanks with a tube made from greenstuff. His contempt for the Imperium is demonstrated by running over an Ultramarines Terminator Storm Shield. With this model, as with the Sergent conversion, I've continued to paint many prominent areas in gold metallic or a complementary brown, to emphasize the flashiness of these speedsters. The other Riders continue the theme, as well as incidentally gaining the go-fasta benefits of the color red due to their devotion to Khorne. 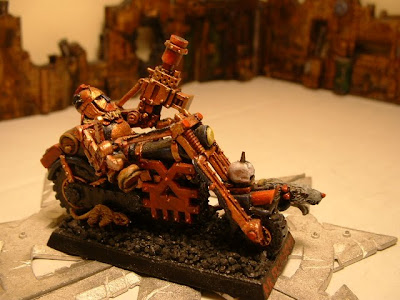 The other special weapons rider from the Thunder Chiefs is Darrin "Flombo" Flomberg, armed with Meltagun, and riding the not-so-common Squat Bike Mark II. This bike variant was never put in the Citadel catalogs, but did appear in White Dwarf 149 in May 1992. It is one of a few 40K Squats items to be released after 1989 minis accompanying the first Squats Army List in White Dwarf (the Squat Pirates are the others).

I've added some bits to the bike, but did not make any conversions that involved cutting bits off to keep a complete version of the MkII Bike. The Khorne symbol placed over the engine comes from the Chaos Vehicle Accessory Sprue 2. I also added a spiked skull bit over the front wheel, and can't remember where exactly it came from.

Rider Flomberg himself is composed of the Hearth Guard Rider body and the arms of the Great Greenskin Enemy. His right arm is made from half of a plastic Epic Ork vehicle grabber-arm bit, and I've added wires made of greenstuff to attach it to the handlebar. 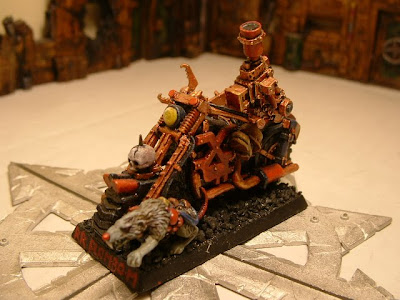 From the other side, we can see more of Flombo's Meltagun arm, originally the Bionik Shoota Left Arm from the GorkaMorka bionik bits series for the Orks. This side of the bike also has a Khorne symbol over the engine, this time it had to be cut to make it fit with the exhaust pipes. The Mutant Space Rats make another appearance on the base; the varmint shown has survived some particularly interesting experiments. I think I should have put the rat on the other side. Having his bulky Meltagun and the large rat on the same side makes him look a little lopsided.

The Mark II Bike was not a very successful development for the Squats line. It's just too big for the Squats, and does not fit well with the older bikes. The large solid bike body bit also uses much more metal than the older bikes, increasing the cost to produce it. The exposed thin wires for the handlebars seem to have been too advanced for the casting process at the time and I had to replace the broken areas with greenstuff. From the timing of its appearance, I would guess that it was an early 40K attempt for the designer Norman Swales, who produced most of the Epic Squats vehicles.
Posted by Hungry Ghosts at 10:36 PM