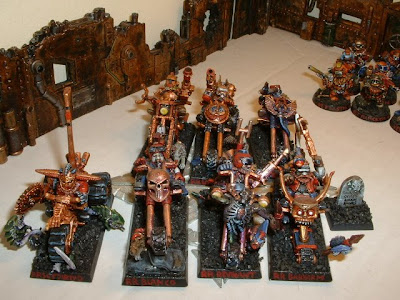 The Thunder Chiefs biker gang are the first Fast Attack squadron from the Hungry Ghosts, counting as Rough Riders. This unit is where I wanted to avoid the monotony of the limited variants of the bikes, so I spent a lot of time converting each trooper to give them a unique appearance. The Squat Bikers are also considered "silliest unit" of the "silliest army," so I wanted to convert them into interesting Chaos Renegades, deflating the innate silly-factor these miniatures are believed to possess.

Only the first 7 Thunder Chiefs are shown above; there are 3 more on the way, but my 1000 point Army List uses 7. There are also only 7 different Squat Bike Rider minis, so I will have to get a bit more creative with the last 3 Bikers.

The squadron's name "Thunder Chiefs" comes from my youthful misinterpretation of the AC/DC song "Dirty Deeds." I thought the line "dirty deeds and they're done dirt cheap" was "Dirty Dee and the Thunder Chiefs". I had no idea who the song was about, but they seemed important. 30 years later, we have the Thunder Chiefs squad led by Sgt D.R.T. "Dirty D" Zobdafi. Zobdafi is just the last name of a high school friend that rhymes with Dirty D and D.R.T. 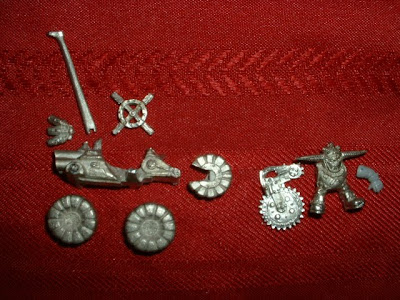 The first view of Sgt Zobdafi is his pre-construction bits form. He will use the Squats Trike body, wheels, and banner pole, which was made to fit the Exo-Armor Squats and was strangely without a steering mechanism. For a steering wheel, I added the Ork Squig Catapult Winding Handle. Then an additional row of 3 exhaust pipes (the old metal version of the Space Marine Bike Smoke Launcher bit) because more is better.

The bulk of the steering wheel also filled in most of the extra space left by using the Hearth Guard Warlord bike rider, instead of an Exo-Armor Squat. Mine came with the horns pointing straight out instead of curving up, which I kept because it helped increase the width of the bike. I picked one of the plastic Squat arms to use as his steering arm. I decided that all the round shapes already in the bike design would be enhanced by a round Power Saw Arm from the Necromunda Pit Slave series, and which would also help increase his width. 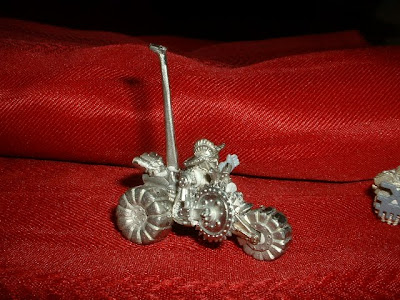 Here is the basic shape of the model, stuck together with temporary sticky stuff. The extra bits and straightened horns are nicely balancing out the huge rear wheels. The extra exhaust pipes fit nicely with the angle formed by the shape of the bike and the banner pole. Overall, I'm going for a cheese wedge kind of shape for the Rough Riders Sergeant. 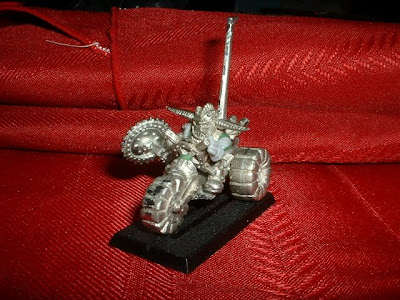 And here he is permanently assembled. I've had to use green stuff to attach the arms. The Squat Arm was a bit too short to reach the steering wheel, and I wanted the Saw Arm to be set at an oblique angle to contrast with orientation of the wheels. I've also positioned him so he looks like he about to thrust his Power Saw forward at the nearest enemy or bystander. I am not that excited by the empty space over the front wheel, and will have to do something about it. 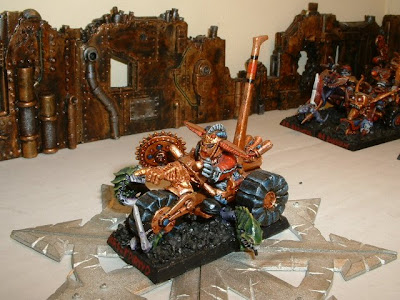 Here is the finished conversion from the front and left. The most noticeable addition from the versions above is the swarm of Tyranid Rippers Sgt Zobdafi is slicing through. I wanted to have my Fast Attack squad look like it was in motion, and adding some Rippers jumping away (and one squashed under the front wheel) gives that sense of motion.

For the Rough Riders, I also tried to find a painting scheme for the wheels that made them look like they were in forward motion as well. I decided to make them a basic black, with highlights in blue and space wolf grey, with the highlights more pronounced on the front edge of the wheel and weakening and darkening toward the back. I also used the space wolf and blue highlights on the black areas of his gear, to make them look glossy and in motion. 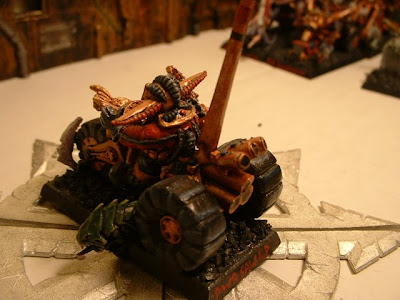 I painted Sgt Zobdafi in the same colors as the bike itself to give the sense that he was embedded in the bike, rather than just riding it. (Which is presumably how the Eggo-Armor Squats controlled the vehicle). From behind, I've also used plastic bits of cable from Eldar Guardian Arms and elsewhere to connect his back into the bike body, bits of cable that match the ribbed patterns on his armor (and the similar patterns created by the wheel segments and Rippers). 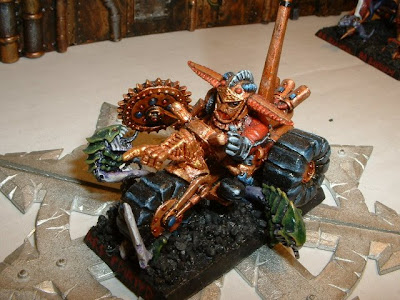 Here is a closer view from the above left, showing more clearly the scrambling Rippers. The one on the left is positioned so he is jumping approximately straight out, like the Warlord's horns. The Ripper on the right is positioned so it mirrors the angle of the Power Saw Arm, which is just barely making contact with the Ripper's tongue and teeth. It provides an additional point of glue contact to keep the Ripper in place and gives the Ripper adequate reason to be leaping backward. The last Ripper is actually made from bits of other nids and greenstuff, being squashed by the front wheel. I positioned the long white tail so it is pointing up at an angle perpendicular to the Sorcerer's Hand acting as front fender on the bike.

The closer view also shows the duplication of color patterns on the details of the wheels, saw, armor, and exhaust pipes. The bulk of the bike's body and the rider's armor was painted a bold golden-brass because our Rough Riders are attention hogs, and it reminds one of the cheese wedge shape of the bike. 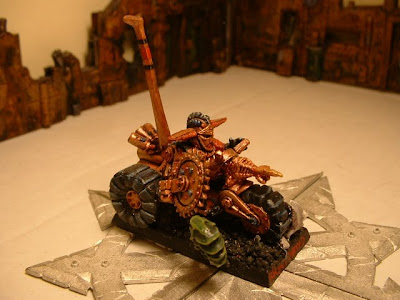 Here is a view of Dirty D from his right side, showing his Power Saw arm about to slice through the Ripper while he and the bike point toward their next victim. The colors for the Rippers were selected for maximal contrast with our Biker Sergeant. I decided to leave the Banner Pole free of any banner to avoid distracting attention away from the forward motion of the bike: the Chaos Hand shows our biker is intent on destroying what is ahead, while a banner trailing behind would draw attention to where he's been. In general, the shape of the Squat Bikes is weighted toward the back half, so with this squad I've tried to use additional bits on the bikes and as scenery to tip the scales to the front. 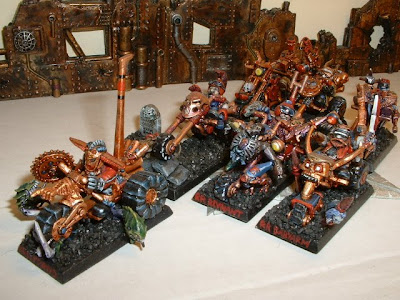 Finally, one more picture of the Thunder Chiefs on the move. We see them riding past some Tech Wall Ruins made by Armorcast. I'm very happy with this series of scenery: the wall are very well-detailed and provide a nice contrast to all of the recent Citadel scenery sets that are overtly Imperial in design.
Posted by Hungry Ghosts at 2:11 AM