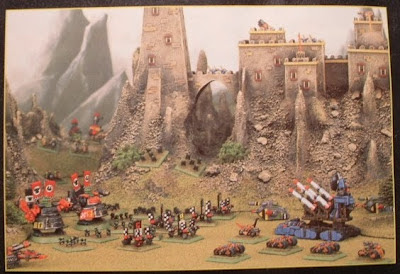 Finally, the final chapter on the Squats range for Epic Warhammer 40,000. Many a keg has ripened since last we visited the 6mm battlefield, but it is time to end this tale.

Above, one of the last glorious scenes of Squats victorious in combat against the green hordes, from the 1996 Epic Catalog (North America). A mighty fortress armed with artillery from the Land Train towers over the Ordinatus Gologotha and accompanying fast attack bikes and battle tanks. 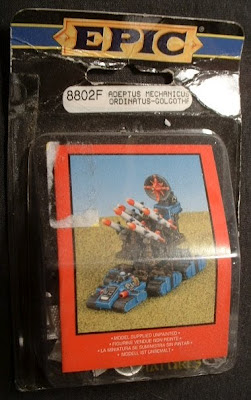 Here we have the Ordinatus in Packagicus Status. Do not be fooled by the packaging, the Golgotha is named for the eponymous Squat Homeworld. And we know the Imperium would be entirely lacking in Ordinatii without Space Dwarf advanced technological prowess:

“Geronimus Undersen devised an Ordinatus [Armageddon] as a defence against the marauding war machines [of Chaos]. Undersen mounted a massive starship weapon onto a land-bound chassis, giving the Imperial forces an immense machine powerful enough to destroy even the largest and most heavily armored foes. This idea was by no means original, and followed the concept behind the famous Squat Titan-killer – the Cyclops.” (White Dwarf 191 p. 52, Nov 1995)

The battle scene above is itself a celebration of the power of the Squats, with the Ordinatus Golgotha's mighty Hellfire Missiles repelling the invasion of Homeworld Golgotha by the Ork Warlord Ghazghull Thraka:

“Ordinatus Golgotha was constructed in the recaptured strongholds of the Squats. Golgotha's terrifying Hellfire missiles devastated the Orks, slaying thousands over the course of a week. The Orks were routed from the Squat Homeworld and since then the Ordinatus Golgotha has always been in the forefront of any battle against enemies who have a strong numerical advantage.” (White Dwarf 191 p. 51, Nov 1995)

As is common to the known Ordinatus war machines, the Golgotha is composed of 3 parts - a command module in front with a large tractor base behind, upon which is placed the largest weaponry a land vehicle can bear. Which is not to say that the Ordinatus tractor is weakly constructed: it is the planetary crust and its unstable fault-lines that limit the firepower.

Indeed, a poorly documented Ordinatus war machine demonstrates the strength of the Squat design, proving critical to the salvation of the Imperial World Priam:

“This huge tunnelling machine [Ordinatus Priam] was assembled during the siege of Priam, a city overrun by the traitor forces in the Horus Heresy. The immense creation was designed to tunnel through the planet's crust and and then navigate through the white-hot mantle underneath. This rendered it undetectable to Priam's defences and allowed four companies of elite Imperial Guard troops to storm the city's Generatum Vulcanis, breaking the siege. However, Ordinatus Priam was irrevocably damaged during the attack, as parts of its heatshielding gave way.” (White Dwarf 191 p. 48, Nov 1995)

We can only speculate at the nature of this metal-monster, as the standard Ordinatus tractor platform seems poorly suited to tunneling many miles deep into the planetary mantle. 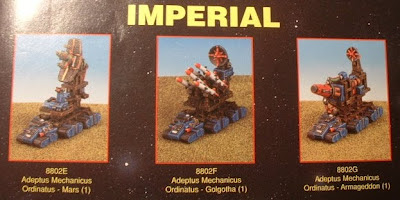 Ignoring the Imperial white-washing, here are all three released Ordinatus war machines as shown in the 1996 Epic Catalog.

Now that we have discussed the power of the Squats on the land and underneath, we must dismiss any notion that the Squats neglected airborne weaponry. 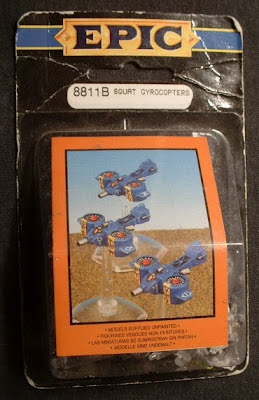 The most common craft is the Squat air forces is the Iron Eagle Gyrocopter, seen above in the blister pack of three available in the 1990s. The gyro-engines allow great tactical flexibility for this staple aircraft- precision vertical take-off and landing even on moving platforms, and swift directional changes as well as the ability to hover stably for sustained fire at enemy hard-points. 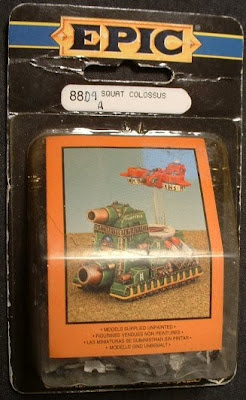 The Iron Eagle Gyrocopter is commonly found paired with the Colossus Super-Heavy Battle Platform. The Colossus is equipped with a flexible array of weaponry. Two large cannon are available to assault Titans, Gargants, and fortresses, while medium sized guns blast away at tanks and battle-wagons. Small arms are plentiful and welcome aid in defeating swarming infantry. The Gyrocopter and Colossus together become a hammer and anvil against opposing troops, with the Iron Eagle mowing down those fleeing from the mighty Colossus. And if that is not enough, powerful rockets are ready for long-range assaults simultaneously with the mid-range Titan-killers and tank-destroyers and the short-range anti-infantry weaponry. A gun for all occasions. 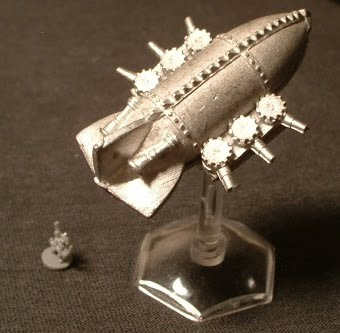 When the heavy fire is needed from the skies, the Squats turn to the Overlord Airship. With multiple wide-arc cannon offering 360 degrees of fire, the Overlord towers above the puny Eldar Harlequin below. Made with advanced self-repairing materials, the Overlord is a sturdy platform for war at any altitude. 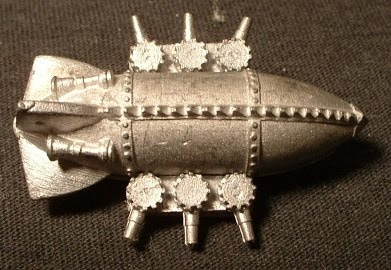 Like the Land Train, the Air-Wing of the Squats military was released in Summer 1992, with the Ork and Squat Warlords Epic 40K Rules Supplement. And, yes, there are more things wrong with that combination than just the order of the racial names.

Moving right along, at some point we all need to blast something out of orbit or across a mountain range... 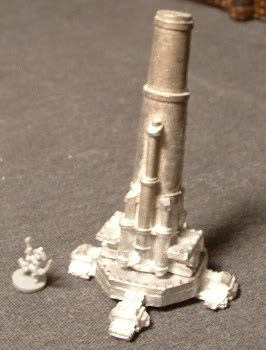 For that, we have the Goliath Mega-Cannon. The finest self-propelled artillery piece in all the galaxy, introduced in White Dwarf 153 (June 1992). As noted,

“The Guild of Engineers is a powerful part of Squat society. It knowledge and experience in the art [of] mechanical construction is legendary.” 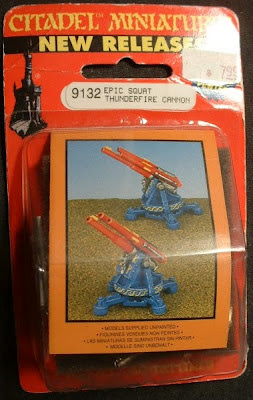 But the Mega-Cannon may be too Mega to be effectively or efficiently used in some situations. In these situations, the Squats use multiple Thunderfire Cannon, each with multiple barrels for a continuous deployment of targeted firepower. The Thunderfire can also provide protection for your Goliath Mega-Cannon when needed. Also known as the Thunder-Fire, it was the last new Squats item released by Citadel, in November 1994. 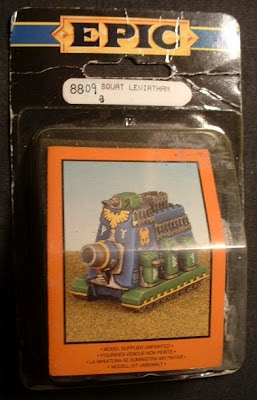 Now the controversial Leviathan. There is absolutely no question about the Leviathan's potent firepower, nor its ability to safely transport a mass of infantry to enemy hard-points.

But some may be confused by the origin and manufacturers of these Super-Heavy War Machines, believing them to be a creation of the Imperium's Forge Worlds due to exposure to post-1996 Imperial propaganda and thought-control beams.

" This awesome vehicle [the Leviathan] is made by Squats and supplied to the Imperial Guard as part of the mutual exchange of materials between the Squat Homeworlds and the Imperium." (p. 30)

Let us also pause to remember the false promise of Leviathan variants made in White Dwarf 163 (July 1993). 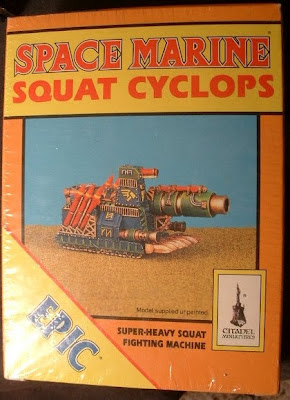 Finally, the Cyclops, released in winter 1994. The Ordinatus Armageddon is plainly small beer when compared to this monster it was derived from (cf. above). The Cyclops is what happens when you combine a Colossus, Leviathan, and Goliath into one massive machine.

“the Cyclops is able to pulverize even the largest of Titans into bubbling piles of slag” (WD 170, Feb 1994). 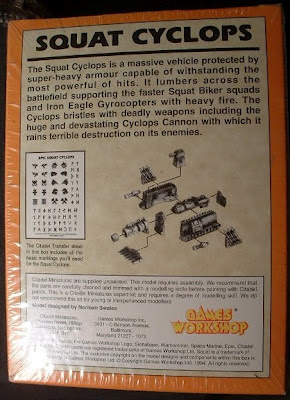 Complicated enough to need assembly instructions, the Cyclops's major weapon is the huge Hellfury Cannon. In addition to this, the Cyclops is also equipped with two Melta-Cannons, a Battlecannon, and two racks of Doomstorm Missiles. Also "tons of bolters" And a vicious Battering Ram.

"Do we have enough guns?" is a question that should never be asked. 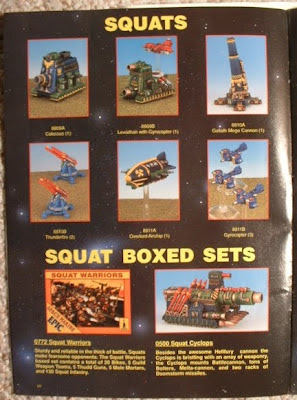 Our Epic voyage is now complete. Here is one last look at the war machines of the Squats featured in this post, also from the 1996 Epic Catalog. Those with keen eyes will see that the Colossus and Leviathan are misidentified. Sloppy humans.
Posted by Hungry Ghosts at 12:11 PM